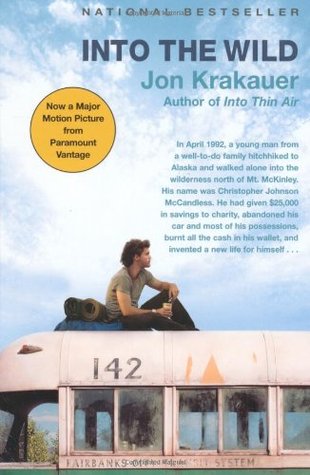 In the month of April, 1992, an intelligent young man with a formidable pedigree went hitchhiking to Alaska. His romantic objective was to traverse the vast and unforgiving wilderness of idyllic Alaska in solitude. Armed with a ten pound bag of rice, a few randomly selected paper backs ranging from the works of Leo Tolstoy to the fiction of Michael Crichton, Chris McCandless walked into the wild. A mere four months into his ambitious adventure, he was found lifeless and decomposed, curled inside his sleeping bag inside an abandoned bus now famously known as No.142 Fairbanks, by a group of moose hunters.

Jon Krakauer has also been surprisingly reckless in his restless and solitary sojourns. After two unsuccessful attempts, and spurred on by the dangerous forces of obdurateness and audacity, Kraukauer proceeded to conquer Devil’s Thumb, an isolated mountain in the Stikine Ice-cap region of the Alaska-British Columbia border near Petersburg. Since McCandless and Krakauer are both individuals cut out of the same cloth, with the only exception being that Krakauer has been inifinitely (and thankfully) more fortunate in his deadly exploits than the late McCandless, it comes as no surprise that the former has undertaken to unravel the mystery behind the ill fated adventure of the former. It also helps that Krakauer is not only an accomplished mountaineer but an acclaimed writer.

So what is it that instills this feeling of inexplicable intractability into otherwise sensible youngsters making them abdicate the hustle and bustle of civilization and retreat into the brooding and beautiful confines of nature? Enslaved by the wilderness, enraptured by beauty and enticed by a monastic fervour, these young men with a fulfilling futures ahead of them seem to take great delight in plunging into the bowels of danger without bothering to fathom the depth. Jon Krakauer attempts (and succeeds substantially) to seek answers to what a predominant proportion of human beings would term and attitude of ‘mulishness’

As Krakauer takes us through the path traversed by McCandless and the various people he happened to meet on his way, we finally comprehend that there was indeed a method to the madness of this youth barely in his 20s. McCandless was neither running away from the world nor trying to set a pretentious challenge to other intrepid and eager trekking enthusiasts. McCandless was an entity trying to see inside his own soul, seeking answers to questions which no one other than himself was capable of answering. McCandless became a martyr to his own myth, but not before attaining satisfactory closure to a mind plagued by tumult and turmoil, some of them self imposed whereas the rest the consequences of extraneous factors.

One cannot help associating oneself with Chris McCandless once the covers come down upon this marvelous work of non-fiction. One can also mumble a silent prayer to Mother Nature for having spared the life of Jon Krakauer for writers of his ability are few and far between and too very precious to be sacrificed!

‘Into the Wild’ – A metaphysical journey of pleasure and pain.