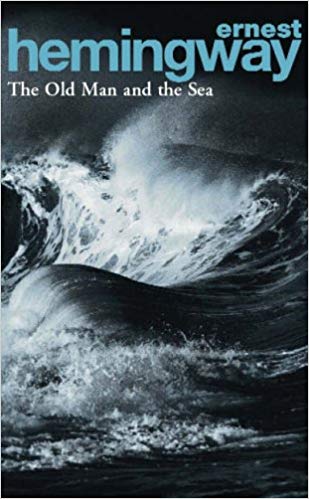 Ernest Hemingway was a clash of contradictions, an entanglement of passions and a bundle of paradoxes. With an infuriating ego, an intransigent outlook and an impetuosity that rankled eyebrows, Hemingway could have easily competed for the most avoidable role model award! However, in spite of or despite these frailties, the man could write and HOW!  The Nobel Laureate’s cathartic work, “The Old Man and the Sea”  is a monumental testimony not only to the breadth of human imagination, but also a testimony to the sweeping depth of a writer’s ability to impact, influence and innovate.

Right from the time I read this epochal work, I have been repeatedly drawn to it like the pull of the most powerful magnet ever invented. On its surface the story is a simple, not so stellar one involving the travails of an old fisherman, Santiago who endures a dry spell of 84 days without a significant catch. On the 85th day of his unfortunate sojourn, he experiences a veritable tryst with destiny by baiting a gargantuan marlin. Locked in a Herculean struggle to bag it, man, marlin, harpoon, skiff and the sea brave the elements of nature as well as one another for the whole of three days. Finally, after an exasperating spectacle that leaves him enervated, Santiago manages to overpower the marlin and gets the fish onto the boat. However, on his way back, ravenous sharks attracted by the smell of the marlin mount a dreaded attack on Santiago and his boat and in the process reduce his prize catch to mere skeletal remains.

That is all there is to this simple story. Or is it? There is a primeval essence that under girds this magnificent tale and the message it conveys to the reader transcends the mere requirements for awards and criteria for recognition (notwithstanding the fact that the book went on to win the Pulitzer and was a great contributor to a subsequent Nobel). The lessons imparted by this story are immense in their gravity and intense in their elucidation. My prime picks (the ones that make this book an all time favourite and irresistible) would be the following:

Bide your time and it is never too late

What never materialized for a frustrating period of 84 days changed instantaneously on the 85th day for Santiago! As Hemingway himself was wont to say, “a man can be destroyed but not defeated.”

Adversity can be the Mother of Inspiration

What matters is NOT the fact that the sharks decamped with Santiago’s catch. The bottom line is the reinforcement of Santiago’s belief, a reiteration of a faith in his abilities and a relentless pursuit of his aspirations.

Exclude the elements of luck and fortune as extraneous to whatever you are out to achieve. Just do your bit to the best of your abilities, intention and conscience. If you want to make a mark, then don’t mull over the outcome!

Age is indeed a clichéd number

Vision is neither linear to age nor directly proportional to weary limbs (unless one attempts to do the insurmountable such as scaling Mount Everest or fostering a hope to land on the moon at 100!)

You are your own Invictus

You are the master of your soul and the Captain of your ship!

These are what makes Hemingway’s work immortal, inspirational & indelible!

“THIS POST IS WRITTEN FOR NOVEMBERSCHILD IN ASSOCIATION WITH KALAMPEDIA – QUEST FOR KNOWLEDGE”.