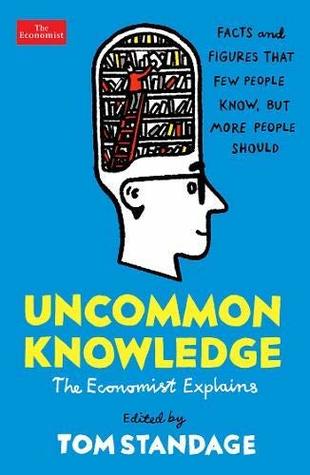 How carrots became orange (orange here does not refer to the fruit, but the colour) or why Australians stand so divided over Kangaroos, are not questions which we, during the course of tiding over our daily travails, pause to ponder over. Tom Standage, a journalist, author (his books include “A History of the World in Six Glasses”; An Edible History of Humanity; and The Turk: The Life and Times of the Eighteenth Century Chess Player), and the deputy editor at The Economist, proposes to answer these and many other questions of a similar bent in the book “Uncommon Knowledge: The Economist Explains”. While a number of contributors have brought their heads together to churn up a list of heterogeneous and wide ranging questions, Mr. Standage essays the role of the editor.

True to its title, “Uncommon Knowledge” is an eclectic compendium of selected facts ranging from the bland to the bizarre. Divided into broader sections with imaginative headings such as ‘little known explanations to stretch your mind’, Globally curious: particular proclivities from around the world’; ‘Speaking geek: Science and Technology’ etc. “Uncommon Knowledge” is a bouquet of minuscule chapters each giving the reader a peek into a world brimming with peculiarities and characterized by oddities.

The book begins with a sprightly chapter that sets the theme for all those succeeding it. On the 18th of April, 2018 at a celebration that glorified the 50th anniversary of Swaziland’s independence from Britain, its king Mswati III (who apparently has fifteen wives), made a startling announcement. He proclaimed that he was changing the name of his country to “eSwatini” since more often than not, people abroad were referring to his country as Switzerland.

While the usual suspects such as Climate Change and Global warming make their mandatory, albeit essential appearance in the book, other intriguing facets such as “Who owns what in space” make for some thought provoking reading. The book goes on to educate the reader that Luxembourg in 2017 earmarked 200 million Euros to invest in space mining companies. While we are informed that the world over the cost of violence against women, taking into consideration direct spending on counselling and health resources, as well as projections of lost productivity, adds up to a whopping 2% of global Gross Domestic Product (GDP), we are also provided heartwarming assurance about a powerful new gene editing tool called CRISPRcas9. Gene drives based on CRISPRcas9, we are informed can be engineered to target specific bits of the chromosome and insert themselves seamlessly into the gap, thus ensuring a copy for every gamete. This novel technology may one day wipe out the scourge of Malaria. For the genetically, technologically and scientifically inclined, here is a visual representation of the prowess that is gene technology:

India’s capital Delhi gains some publicity which it would do extremely well to avoid in future. “Dirty air kills some 30,000 of Delhi’s inhabitants a year – and that is a low estimate some doctors say, if you take account of effects as varied as higher rates of lung cancer, diabetes, premature births, and according to recent research, even autism.” However, even with a daily average level of suspended PM2.5 – fine dust – that is six times what the World Health Organisation stipulates to be the maximum safe concentration, Delhi does not possess the dirtiest air in the world. That inglorious distinction is the preserve of yet another city in India, Kanpur.

While India is battling a dangerous combination of smog and smoke, its restless neighbour China is coming perilously close to decimating the global donkey population. Yes, you read that right! Ejiao, a gelatin produced by boiling and refining donkey skin, and considered to be an elixir by the Chinese is the prime culprit for the vanishing beasts of burden. While the number of donkeys in China have fallen from 11 million in 1990 to 5 million in 2016, the donkey population in Botswana fell by 60% from 2011 to 2016, and a fifth in Lesotho. However, the poor donkey’s loss is the bald eagle’s gain. Once listed as an endangered species, the bald eagle, the very symbol of the United States of America, has again soared back into prominence. A raft of preservation laws has combined with the banning of chemicals such as DDT by the Environmental Protection Agency, to ensure that the number of nesting pairs of these majestic birds is more than just substantial.

Mr. Standage, brings to bear a refreshing and lively flavour of wacky and wicked humour to complement even facts that are somber. For example, in a Chapter titled, “Why The Mediterranean will eventually disappear”, – and in which extremely existential references are made to findings by scientists such as Christopher Scotese, (a geologist at the University of Texas) about the potential shrinking of the Atlantic, and an eventual collision of California with far-east Asia – a passage reads thus: “these scientists are in the enviable position of being able to say things that will never be disproved, as it is unlikely that humanity will be around to see the next super-continent form.”

Although concise in their sweep and crisp in their coverage, Chapters are supplemented with graphs, diagrams and charts to convey the primary message. Easy on the eye and bereft of verbiage, the narration is engaging and racy. A cross between an encyclopedia and a pocket book, “Uncommon Knowledge” is a veritable addition to any bookshelf of value. These byte sized jewels of information, in addition to perking up the interest of the reader and piquing her curiosity, also strive to open many windows behind which lie people, places and propositions about which having at least a fundamental knowledge is not just be advisable, but might soon become essential considering the pace at which our world is progressing.

By the way, China rents out its pandas because…