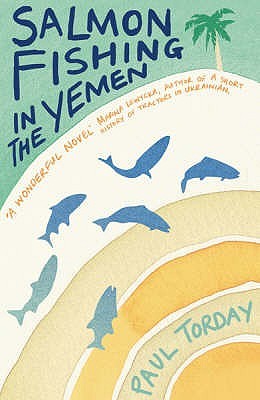 Emotional, humorous and introspective, Paul Torday’s “Salmon Fishing in The Yemen” is a book that leaves the reader feeling hopeful, light and philosophical as the covers come down upon it. Brilliantly humorous in its sweep and measurably satirical in its wake, Mr. Torday’s work represents an achievement of admirable proportions. This is exactly the book which one would need to carry to bed, especially considering the dystopian times we are experiencing, courtesy a rampaging Corona virus.

The book whose unique title symbolizes the synonym of impossibility, also possesses an abundance of unlikely hope within its confines. At the centre of Mr. Torday’s debut novel is a reticent, hen-pecked, humble but brilliant civil servant, Dr. Alfred Jones. When not at the receiving of his high flying banker wife Mary’s razor sharp sardonic tongue, he I busy penning esoteric works on caddis fly larvae and many other things relating to salmon. Employed by the National Centre for Fisheries Excellence (NCFE), he is an eminent scientist and a veritable repository of all things aquatic and pisciculture. His uneventful, prosaic and mundane existence is suddenly given a refreshing spurt of vigour, courtesy Sheikh Muhammud an affluent Yemeni potentate. Sheikh Muhammad’s flamboyant and almost fairy tale dreams of populating Yemen’s Wadi Aley with Salmon sends No.10 Downing Street in a PR tizzy and the Hon Rt Prime Minister Jay Vent, pounces on this opportunity to cement US-Yemen relationship that would nurture trust. Fish over fighter jets!

Dr. Jones is designate as the expert for the venture and he is initially skepticism personified. However, the combination of the Sheikh’s calm, unwavering confidence and measured optimism, coupled with the presence of Ms. Harriet Chetwode-Talbot, the Sheikh’s ‘gofer’ on the project boosts his sagging spirits no end. Visits to Yemen, and Finland for procuring various equipment and sojourns to the Sheikh’s estate at Glen Tulloch in Scotland enthuses Dr. Fred’s life with a new purpose and meaning. The only blotch to the project come in the form of a daring but fortunately ill executed assassination attempt on the life of the Sheikh by a goatherd hired by the Al Qaeda network.

The Sheikh views this project more as a pre-ordained philosophical event than a commercial proposition. An avid fishing enthusiast himself, he ardently believes in the power to fishing to bring serenity and sufficiency to an otherwise frenetic world torn apart by, and riven with religious, political and social differences. As the Sheik in a moment of rumination tells Dr. Jones, “Without faith,” the sheikh tells him, “there is no hope. Without faith, there is no love.”

The resemblance of the cast of characters to some key personalities in the Blairite administration is unmissable. While the book would be lapped up by all inveterate anglers, even those who find the activity to be an exercise in unfathomability would love the book. The author clearly does not hold back on either his own perception of ideals or morals. However, the author reserves the most shocking bit of the book for the ending. The slobber-knocker of a climax will leave the reader utterly stupefied.

Salmon Fishing in The Yemen – A story that rekindles hope and optimism.

One thought on “Salmon Fishing in The Yemen – Paul Torday”