The Leapfroggers: An Insider’s Account of ISRO – by Ved Prakash Sandlas 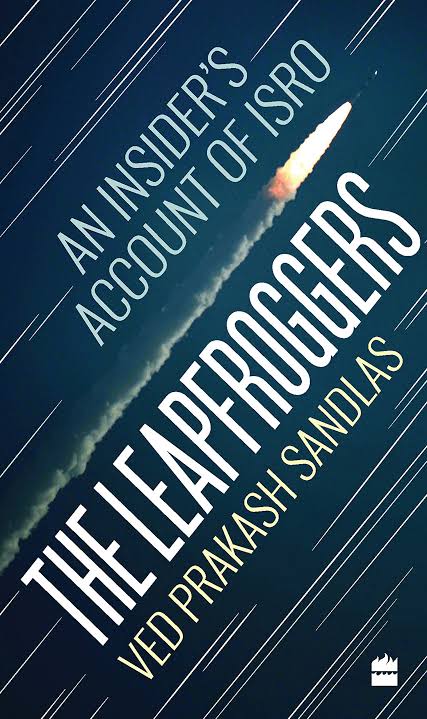 The name Ved Prakash Sandlas may not ring a bell. This is a real travesty for the name of this man should be celebrated in every household. A pioneering scientist, Mr. Sandlas was one of the first fifty engineers who joined ISRO. Some of the laudable feathers in the cap of this distinguished luminary include heading the SLV-3 launch mission as Project Director, functioning as Distinguished Scientist and Chief Controller R&D from 1996 to 2005 and also founding the Amity Institute of Aerospace Engineering.

In a breathtakingly wonderful book, titled “The Leapfroggers”, that evokes nostalgia and instills pride in the heart of every Indian, Mr. Sandlass fondly recollects his formative years with India’s redoubtable space research organization ISRO. The title of the book is in itself a paean to the lambent vision and incandescent brilliance of Dr. Vikram Sarabhai, the doyen of space and technology in India. The philosophy of leapfrogging as encapsulated by Dr. Sarabhai and longingly recalled by Mr. Sandlas, goes beyond incremental progress and cautious gains. To quote the colossus himself, ‘To us, there is no ambiguity of purpose … we are convinced that if we are to play a meaningful role nationally, and in the community of nations, we must be second to none in the application of advanced technologies to the real problems of man and society, and the courage to leapfrog to state-of-the-art engineering and technology pursuits rather than [make] step-by-step scientific developments … Indeed, this is the only way in which I can see the country leapfrogging into a position where it can hope to meet more developed nations on equal terms.’

“Leapfroggers” highlights the endeavours of an eclectic bunch of people, divided by myriad backgrounds but fiercely united by a single and uncompromising purpose. This unique set of people found free reign under a roof that encouraged dissent, tolerated deliberations and established a hotbed of debates. But at the end of the day, when the dust settled, whatever consensus was reached was advocated unequivocally by everyone. “Most ISRO people were highly individualistic, experts in their own fields, very possessive of their specializations, very argumentative in technical discussions, and sometimes very stubborn. But, somehow, they were excellent team members in group activities. There were occasions when they would fight tooth and nail, for several hours, even through the night, and, after the final decision, come out clean with identical views.”

Mr. Sandlas harbours special affection and respect for one of the most spectacular leap froggers of all time. Dr A.P.J. Abdul Kalam. According to Mr. Sandlas, “Kalam was an iconic symbol of what SLV-3 was, of its significance and culture; he was a master leapfrogger, demonstrated by his subsequent growth in DRDO, and his becoming the Dr. A.P.J, the master leap frogger. Once, a journalist predicted that ISRO had decided to name future Satellite Launch Vehicles with the initials of Dr A.P.J. Abdul Kalam: ASLV, PSLV and JSLV (J changing to G to match equivalency in Hindi and other Indian languages).”

Hailing from humble origins – Mr. Sandlas father was displaced from Lahore during the heinous Partition days – Mr. Sandlas, distinguished himself by passing out of the prestigious Indian Institute of Technology, Kharagpur. On Friday, the 27th of October 1967. He reported at TERLS (Thumba Equatorial Rocket Launching Station), near Trivandrum. Being a North Indian, Mr. Sandlas is rendered speechless and left mesmerized by some practices that are unique to the inhabitants of ‘God’s Own Country.’ “It was most surprising to learn about nokku kooli (payment for looking), which entitled union activists to claim charges for loading/unloading materials even if it was done by machines or special/skilled labourers. There was a story floating around the Palayam fish market: A truck driver unloaded goats by opening the rear flap-door and letting goats climb down on their own. A person was standing there counting 1, 2, 3 … up to 42 and he demanded Rs 42 as unloading charges! Of course, the driver pulled out a dagger and abused him. ‘Come, let me teach you, I will unload you from this earth.”

ISRO, as Mr. Sandlas informs us during his early tenure was filled with intellectual giants who had abhorred cushy jobs abroad to enable India get a foothold in the sphere of Space Research. This was largely due to the clarion call of Dr. Vikram Sarabhai who encouraged Indian scientists working abroad to join ISRO. Mr. Sandlas made his preliminary mark at TERLS by providing a radio link between Thumba and Tokyo for the X-ray astronomy experiments of Japanese scientists. The experiments were conducted during April 1968, to ascertain the most appropriate time for rocket launching, synchronizing with simultaneous observations of the sky using radio telescope in Tokyo.

ISRO was established on 15 August 1969, superseding the erstwhile INCOSPAR (Indian National Committee for Space Research), Since, at that time, most ISRO establishments were in south India, it was jokingly called ‘Idli Sambar Rasam Organization’. The democratic and meritocratic set up in ISRO furthered an atmosphere that was paradoxically congenial as well as a cauldron of roiling opinions. As Mr. Sandlas illustrates “Project Review Meetings (“PRM) represented a free-for-all fighting ground. The usual gladiator/combat list comprised Madhavan Nair vs Mr. Sandlas himself, Dr Srinivasan vs Mr. Dev, and some leg-pulling between Majeed and Madhavan Nair. “There was a saying (joke) floating around VSSC that if Sandlas and Madhavan Nair could agree on some issue on their own, even God could not change their decision. Once, we fought and abused each other so much that Kalam was disgusted enough to walk out of the PRM, leaving Dr Srinivasan behind to sort out matters…”

Mr. Sandlas had the enviable experience of engaging with foreign collaborations in the sphere of technology transfer during ISRO’s nascent years. During one such collaboration visits to France, M. Sandlas and the team were taken to visit Wane Kreek on the Surinam border. In a roadside shack, the team ordered vegetarian lunch of rice and baked beans in tomato sauce. Imagine their horror when they witnessed pork balls floating in the gravy— ‘added to enhance the flavour’— “with advice that they may be left behind uneaten and with the assurance: ‘the rest of the dish is pure vegetarian.”

The book has some inspiring and rousing examples of taking adversity head on, bucking the trends and coming up trumps. For example, after the SLV-3-E-01 disaster Prof. Dhawan in a press conference, declared: ‘We have stumbled a little, but not fallen flat on our face.’ As Mr. Sandlas vigorously reminds his readers, The SLV-3-E-02 was successfully launched on 18 July 1980 at 080345 hours, satisfactorily injecting 35kg Rohini Satellite, RS-1 into a near-Earth orbit after 10 minutes. This demonstrated the real strength of ISRO, its people, and our indigenous science and technology. The event signified India’s entry into the exclusive space club of nations with satellite launch vehicle capability; the other five countries were Soviet Union (Sputnik-I launch by Sputnik-PS on 4 October 1957), United States (Explorer-I launch by Juno-1 on 31 January 1958), France (Asterix launch by Diamant A on 26 November, 1965), Japan (Osumi launch by Lambda 4S on 11 February 1970) and China (Dongfanghong-I launch by Chang Zheng-1 on 24 April 1970). A day earlier, the press had speculated about India becoming a space and missile power; equating the SLV-3 with many such capabilities and options.

The book abounds with a plethora of examples similar to the one mentioned in the preceding paragraph. More than everything else, it makes us sit up, recognise, and salute a real hero whose accomplishments have resulted in putting India on the very forefront and frontier of space technology and research.

After a lambent career that saw Mr. Sandlas bag awards such as DRDO’s ‘Scientist of the Year’; FIE Foundation National Award (1998) for Science & Technology, and IIT Kharagpur Distinguished Alumnus Award, Mr. Sandlas breathed his last on the 6th of July, 2017.

It is to the indefatigable spirit of selfless intellectuals such as Mr. Sandlas that a billion and more of us owe an eternal debt of gratitude.

From Cowrie to Crypto: Blockchain and the Future of Money by TCA Sharad Raghavan