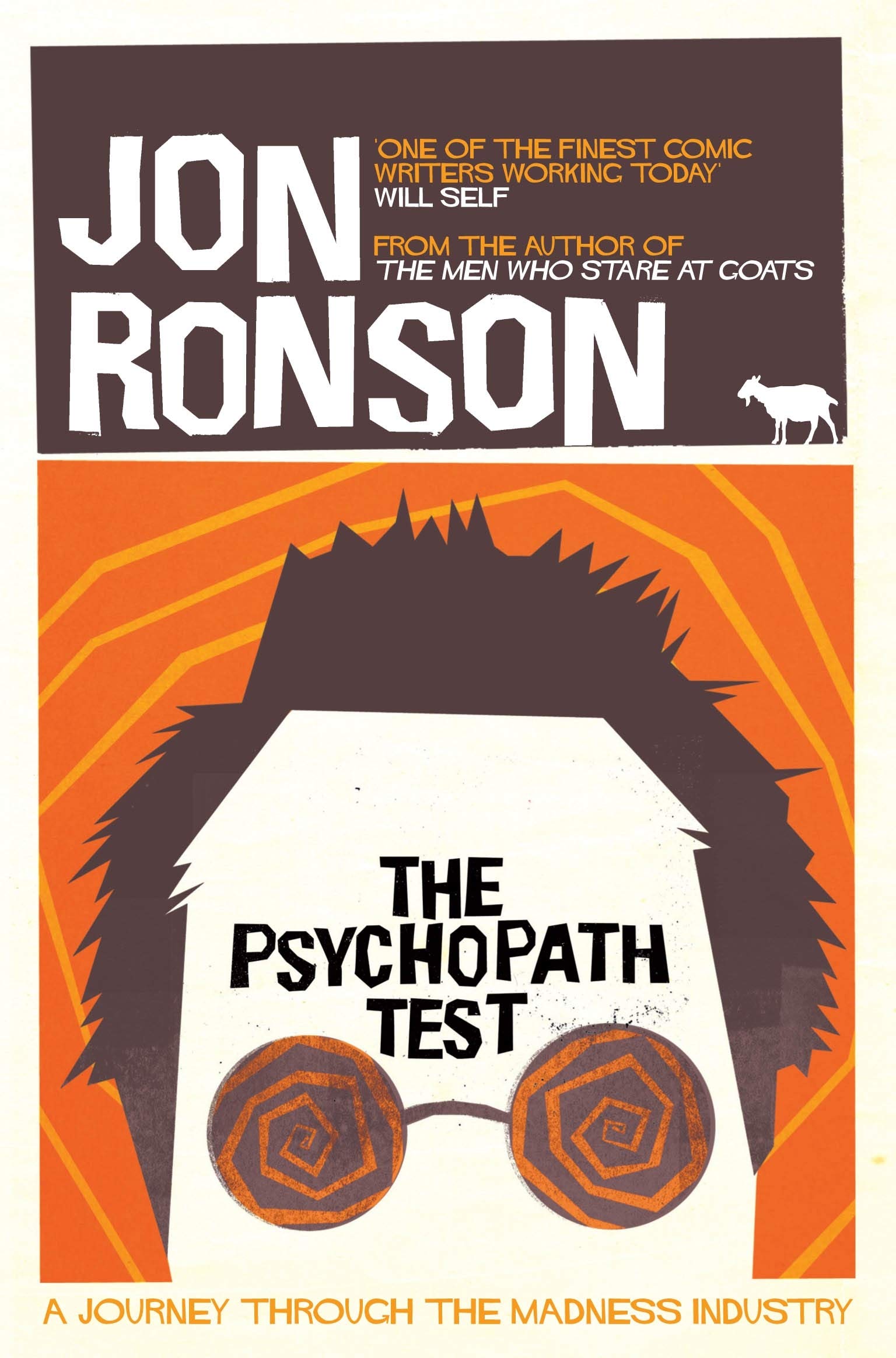 Traipsing around the globe trying to discern psychopaths and psychopathic tendencies might not qualify as either an absorbing hobby or a way of life, unless, one happens to be either a psychopath or a psychiatrist hunting the former – and his clan – down. Yet, best-selling author Jon Ronson does precisely that. The outcome of this singularly peculiar search is the equally absorbing book, “The Psychopath Test.”

It all begins when Mr. Ronson is requested by an acquaintance of a friend to investigate the appearance of an elaborate and painstakingly handmade book, Being or Nothingness, that has found its mysterious way into the pigeonholes of random academics spanning the world. A clever take on Jean Paul Sartre’s seminal work, “Being and Nothingness”, this book has forty-two pages with every other page being a blank sheet. Page 13 of every copy has a hole gouged out. This weird book takes Mr. Ronson first to Gothenburg in Sweden before inducing in him an irrepressible arousal to dive deep into the world of the ‘madness industry.’

What follows is a bewildering pastiche of a cast of characters, renowned and reviled, repulsed and revered. From meeting Professor Douglas Hofstadter, the author of the topical ‘Godel, Escher, Bach”, to talking up the controversial psychiatrist R.D. Liang’s son Adrian Liang, Mr. Ronson takes us at a breakneck speed through the evolution of psychiatry and its glorious hits and gloomy misses. The unimaginably dirty story of Mary Barnes, a patient of Liang, who had this despicable penchant for smearing herself and the walls of her room with her own excreta before being provided ample paint as an alternative – a move which ultimately brought her fame and success – to interviewing Tony, an inmate of the infamous Broadmoor Psychiatric Hospital who insisted that he ‘faked’ madness to get away with a shortened sentence after indulging in Grievous Bodily Harm, Mr. Ronson takes us through the muddy and murky waters of an illness which arguably garners the maximum sympathy as well as anger.

This book in fact is an agglomeration of interviews conducted mainly with psychiatrists and inmates of various asylums and correctional facilities. For example, at the high security Coxsackie Correctional Facility in eastern New York, Mr. Ronson meets with Emmanuel Constant, a former Haitian death-squad leader who is behind bars, ironically not for his heinous crimes, but for a mortgage fraud. Mr. Ronson, coincidentally had interviewed Constant when he was a free man living at Queens. During the time of that interview, Constant invites Mr. Ronson to his mother’s house where he proudly and later, a tad sheepishly, displays to Mr. Ronson an assemblage of Dumbos, Muppets, Bart Simpsons, Jackie Chans and Buzz Lightyears.

At the core of Mr. Ronson’s work, however, is the Holy Grail that assists in ‘spotting’ psychopaths. This Holy Grail is the 20-item Hare Psychopathy Checklist (by the way the title of the book derives from this check list) devised by the famous psychologist Robert Hare. Mr. Hare is a researcher in the field of criminal psychology and developed the Hare Psychopathy Checklist (PCL-Revised), used to assess cases of psychopathy. Incidentally, Mr. Hare also advises the FBI‘s Child Abduction and Serial Murder Investigative Resources Center (CASMIRC) and consults for various British and North American prison services.

Armed with this checklist, and after attending a course personally conducted by Dr. Hare over a span of three days – a part of which included looking at mutilated and blown faces – Mr. Ronson goes on an interviewing spree to identify psychopaths. His subjects vary from the prosaic to the preening. From Chainsaw Al Dunlap, the merciless and ruthless Corporate Chieftain whose primary predilection involved slashing jobs and birthing ghost towns, to Petter Nordlund, the strange author of the aforementioned Being or Nothingness, Mr. Ronson’s journey is a mixture of hilarity and astonishment.

Mr. Ronson also brings to our attention the dangers and futilities involved in being a slave to ‘checklists.’. A classic example being the Diagnostic and Statistical Manual of Psychiatric Disorders (“DSM) an ever expanding tome (with gargantuan appendices) of conditions published by the American Psychiatric Association. Now in its fifth edition, the DSM a virtual dinosaur in size and pages embraced within its confines tenuous and esoteric sounding disorders such as intermittent explosive disorder (temper tantrums), relational disorder (pissed off with a relative) and sluggish cognitive tempo disorder (you may lack motivation). Based on this universally acknowledged tome, doctors ‘blanket’ prescribe drugs even to children as old (or as young) as three years. This insidious practice has resulted in a surge of children being diagnosed as being afflicted with “bipolar disorders” and “Attention Deficit Hyperactivity Disorders” (“ADHS”). The ‘avoidable’ death of three-year-old Rebecca Riley courtesy an overdose of anti-psychotic medication makes for some seriously somber reading. Mr. Ronson engages Robert Spitzer, the editor under whose aegis the DSM took its most obese Avatar and tries to elicit from him an answer to the question as to whether the DSM has spawned an era where psychiatric diagnoses have become convenient labels to obfuscate purely normal, albeit irritable behaviours. The response of Mr. Spitzer sends a chill down one’s spine, “I don’t know.”

The tacit and unwritten collusion between the medical profession and Big Pharma is also an issue to be considered. For example, consider this extract from the San Francisco Chronicle dated July 13th 2008 concerning the doyen of childhood bipolar disorders, Dr. Joseph Biederman, and reproduced by Mr. Ronson:

“The science of children’s psychiatric medication is so primitive an Biederman’s influence so great that when he merely mentions a drug during a presentation, tens of thousands of children, within a year or two will end up taking that drug, or combination of drugs. This happens in the absence of a drug trial of any kind – instead, the decision is based upon word of mouth among the 7,000 child psychiatrists in America.”

Dr. Biederman is a controversial figure who was accused of peddling the commercial interests and corporate agenda of the multi-billion dollar pharmaceutical giant Johnson & Johnson. Ian Goodyer, a Professor of child and adolescent psychiatry at Cambridge University, believes that the childhood bipolar illness is a conveniently crafted illusion. “Epidemiological studies never find anything like the prevalence quoted by the protagonists of this view that there are bipolar children….it is an illness that emerges from late adolescence. It is very very unlikely indeed that you’ll find it in children under seven years of age.”

The book also has its share of hilarity. Mr. Ronson’s escapade with conspiracy theorist-turned-transvestite Fetishist-Turned-Messiah-turned-self-proclaimed Jesus Christ, David Shayler to the residue of the radical psychiatrist Elliott Barker, Mr. Ronson brings to bear his unique wit and self-deprecating humour. Constantly reminding us of his obsession with the horror that his wife might be dead if she is not answering her phone, Mr. Ronson wonders whether he might tick off more than just one of the 20-point Bob Hare Checklist that qualifies one to be a psychopath. Also of great interest and humour is Mr. Ronson’s tryst with some actively practicing propagators of Scientology, the late Ron L. Hubbard’s fascinating albeit dubious creation.

But on the whole the book makes for some sobering read. The foibles and failures of once deified criminologists such as the mercurial Paul Britton who rose to fame with his criminal profiling before ungainly coming down to earth as an ostracized homo sapien who identified the wrong criminal (an innocent man going by the name of Colin Stagg was unfairly punished for 14 months for a gruesome murder – having been subjected to the most revolting of honey trap techniques at the suggestion of Mr. Britton – while the real murderer John Napper pitilessly and brutally killed and mutilated two more victims), the book warns us about getting immersed in glorified stereotypes made sacrosanct by their reputed creators.

“The Psychopath Test” – a book to be eagerly lapped up!

It was on a lazy summer Sunday that they found the portal. Yes, a portal. Having dined on some scrumptious fare at a quaint restaurant renowned for its pure South Indian vegetarian fare, Ash and Venky retreated to the Garden of Blaise. Supposed to be named the Garden of Bliss, the queer name was the courtesy of the grammatical ineptitude of the Registrar.

The minute their eyes jointly spotted the spherical transparent object nestled innocuously amidst a patch of unruly dry grass, they knew it was a portal. With a mixture of excitement and trepidation, they intertwined their fingers tightly and after a furtive glance to both their left and right, jumped into the void that reflected the brilliant blue sky and the tendrils of clouds. Venky was reminded of The Enterprise as the duo went careening, swaying, hurtling, flying and screaming towards the unknown.

Their flight came to a rude halt when they landed with a soft thud in what felt like luxurious foam. Floating in the middle of an incandescent span of turquoise water, Ash and Venky were surrounded by quietude, serenity and the strains of a melody which strongly reminded them of Beethoven’s ‘Fur Elise.” Suddenly the waters roiled as a three headed crocodile with baring teeth flew across the water and pulled Venky into the depths of the water. The last thing he could hear was Ash hollering.

Venky woke up with a jolt. It was exactly a day to the year since she left him.