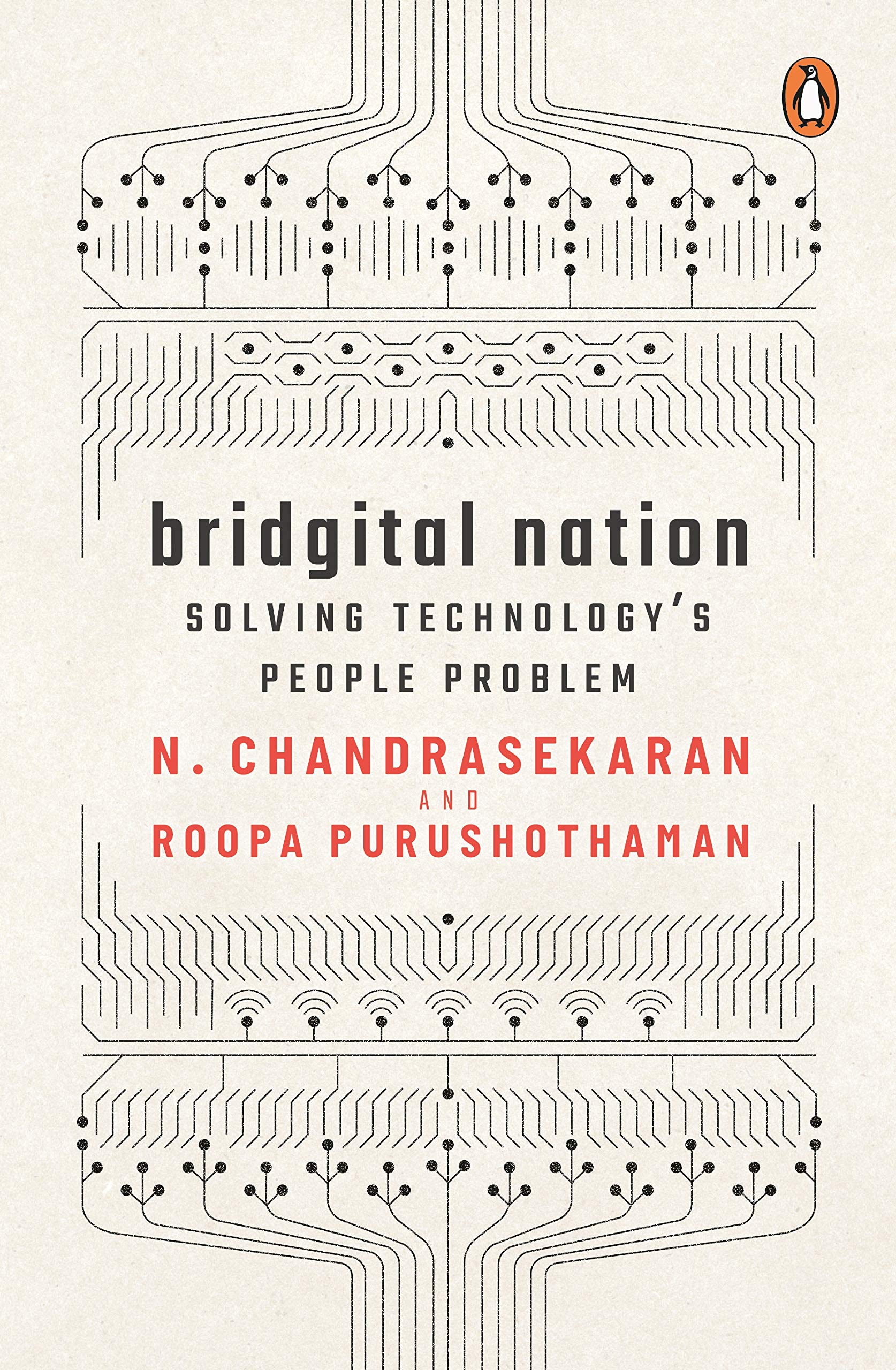 A book that is bold and enterprising in intention, but falling short of concrete suggestions for implementation, “Bridgital Nation” is a welcome addition to the works that attempt to lay a concrete path for solving problems concerning access to basic resources and means in India. The credentials of the authors make the work one to be taken seriously. While Mr. N Chandrasekaran is the Chairman of the Tata Group, one of the world’s best known multibillion dollar conglomerate, Ms. Roopa Purushothaman is the Chief Economist and Policy Advocate at Tata & Sons. Hence, a slew of references alluding to various social, economic, cultural and innovative initiatives undertaken by the Tata Group, within the book, does not strike the reader as surprising.

The basic premise permeating the pages in the book, is an exhortation by the authors to shed the notion of viewing problems as well as solutions through the reductionist binary lens of technology against jobs. Technology, according to the duo can and should be employed as a powerful tool to improve and embellish the functioning of various sectors such as the legal process, education and medical services.

The book begins with a bleak overview of the gap between supply and demand of even rudimentary essentials that is plaguing the population of India today. “For example, it will take a further 600,000 doctors and 2.5 million nurses, a million teachers, about 400,000 agricultural extension workers, and 1.7 million commercial vehicle drivers to meet India’s current needs. Despite the 30 million cases pending within India’s judicial system, the country has only three quarters of the judges it needs. There aren’t enough researchers, plumbers or welders either.” The quintessential issue, leading to this situation, is, according to the authors, two-pronged. First is an inability to bring women into the work force, and the second, a lack of a vibrant ecosystem that encourages and nurtures entrepreneurship. Consider this: “Nearly 120 million Indian women—more than double the entire population of South Korea—have at least a secondary education, but do not participate in the workforce. If even half of this group of women entered the workforce, in one stroke, the share of workers with at least a secondary education would jump from 33 per cent to 46 per cent—the equivalent of fifteen years’ worth of improvement. This alone could add 31 trillion ($440 billion) to India’s GDP.” In so far as the entrepreneurship landscape goes, the authors highlight the fact that the Indian business landscape although boasting a large number of micro businesses, predominantly encompasses self-employed individuals who are optimistically called ‘entrepreneurs’. “What they run are survival ventures, the only road available, the last throw of the dice. If they had a choice, many of these ‘entrepreneurs’ would probably opt for staid, unglamorous salaried jobs.”

Bridgital recongnises an urgent need to redefine the means that are necessary to deliver a service or solution, especially in a manner that prioritizes the challenges of those without access. Behind the Bridgital process, lies the attribute of digital technology.  A judicious and prudent combination of Digital technology and low-cost service delivery models can complement the skill and talent of workers. The Bridgital process, can, for example ensure both the safety and mobility of women thereby enhancing the existing workforce and more importantly bestowing upon women, their deserving share of both monetary rewards and more intangible considerations such as recognition and progress. According to the World Bank economist Girija Borker, ‘women’s willingness to pay for safety translates into a 20 per cent decline’ in the salaries they could have earned after graduating college. The Bridgital process, can, in addition, also lead to the establishment of a ‘21st Century Cutting Edge Care Economy.’

In the authors’ own words, for instance, childcare workers—whether attached to a care-centre or standalone—could be integrated into a cloud-based management system which allows them to do administrative tasks like reporting attendance, health and safety records, and also to undergo training. This would also enable real-time check-ins and scheduling, and offer a source of collaboration amongst parents. Moreover, individuals can also create a transferable professional history by adopting this platform-based approach, deepening their integration into the formal economy.”

The authors breeze through, at breakneck speed, some of the initiatives that are currently implemented, and are yielding results in the various spheres such as healthcare, as a result of a blend of human capabilities and technical knowhow.

The noble exploits of Nikhil Burman, a driver in Silchar, who by virtue of his selfless service, lends an extraordinary degree of credence to the usually maligned word, ‘middleman’ is worth recounting. Possessing no professional medical qualifications or training, Mr. Burman has redefined the concept of medical care in so far as a multitude of the poor and underprivileged are concerned. Parking his conveyance on the kerb of National Highway 37, he receives a stream of patients, mostly villagers who have made long and exacting treks just to meet him. Armed with a mobile, Mr. Burman then proceeds to make doctors’ appointments, arrange affordable lodgings, along with conveying honest expectations around cures, costs and timelines. This intrepid and tireless individual could be empowered to do much more, if he was equipped with the right type of technology.

A Tata Consultancy Services (“TCS”) pioneered venture in the domain of healthcare that is making waves in the district of Kolar, Karnataka is a case in point. Goaded into action by the then health Minister Mr. Ramesh, TCS converted an otherwise plaid sanatorium in Kolar into a Digital Nerve Centre. Local health workers popularly known as ASHAs, are provided iPads. Armed with these devices, ASHAs make house visits, talking to patients, recording their symptoms and updating their medical records. The data is uploaded onto a cloud server, thereby enabling doctors to deal with patients on a remote basis even. The necessity of and for proximity is thereby restricted to purely inevitable circumstances.

The book concludes by positing the potential for porting technology into diverse sectors of the society thereby harnessing the power of both intellectual and Information Technology capabilities. This process would usher in a new and vibrant India. Although not a teeth-to-tail handbook dealing with the measures that would make the Bridgital process meaningful, the only shortcoming of the book is a heavily macro-level and 30,000 feet exposition of both the nature and feasibility of the Bridgital process. Racing through the proposed solutions does not provide the requisite and appropriate degree of amplification that is otherwise necessary for identifying, evaluating and appreciating the cures for the social, economic, cultural and technological shortcomings ailing our nation.