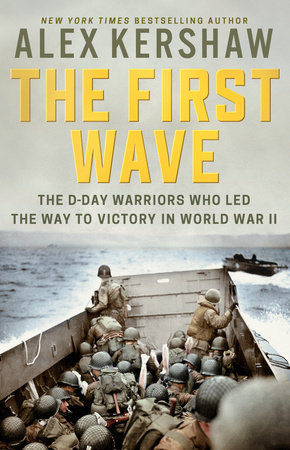 2019 marks the 75th Anniversary of one of the most storied and epochal events dotting the annals of global and military history. The colossal Allied invasion at Normandy (“D-Day”) that set in motion the defeat of the greatest racial bigots that humanity had the misfortune to be associated with, has become immortal not just for the supreme sacrifices made by thousands of brave soldiers, but also for the lessons it imparted for the very future of mankind. As may be expected this momentous Anniversary has spawned a deluge of books on the subject. One book that stands apart for its unsparing prose and distinctiveness is “The First Wave – D-Day Warriors Who Led the Way to Victory in World War II” by Alex Kershaw. Mr. Kershaw views the invasion of Normandy standing upon the shoulders of a unique set of individuals. The first wave of soldiers to be air dropped, flown and shipped to the Northern French region to face the merciless onslaught of Hitler’s abominable albeit powerful Nazis. These are the shoulders that neither drooped nor sagged nor complained. They may have creaked with the physical burdens entailed by the rigours of a ruthless combat, but creak was all they did.

On the 6th of June, 1944, an armada the likes of which was never seen before and has never been spotted since set sail from the shores, and took off from the skies of Britain. Destination: France. Mission; to liberate Europe from the clutches of the sadist Adolf Hitler. The phalanx consisted of 5,333 Allied ships and landing craft embarking nearly 175,000 men. The British and Canadians put 75,215 troops ashore, and the Americans 57,500, for a total of 132,715. Adding to this tally were 20,000 Airborne troops. Waiting for these troops on the highly fortified beaches of Normandy were steely German soldiers all set to mow down the invaders.

Kershaw’s heroes make for an eclectic mix of the refined and the rough; the grizzled and the gentle and the rustic and the refined. But all of these indomitable warriors were bound as brothers in their objective, intent and action. The fast paced, adrenaline pumping and extraordinarily emotional book recounts some of the memorable heroics that will forever stand the test of time. Staff Sergeant Jim Wallwork, of the British Glider Pilot Regiment, demonstrated incredulous feats of airmanship. With only a stop watch, map, and compass as navigation tools, this legendary pilot landed his glider with a precision bordering on the perfection right next to a bridge whose capture was the objective of Major John Howard and his company. Captain Frank Lillyman of New York and the 101st Airborne Division executed his duties as a ‘pathfinder’ and during the course of discharging his duties faced some hair raising trysts with mortality. Then there was the incredible Brigadier Simon Christopher Joseph Fraser, 15th Lord Lovat and 4th Baron Lovat, DSO, MC, TD, JP, DL. Lord Lovat, described by Winston Churchill to Joseph Stalin as, “the mildest mannered man that ever scuttled a ship or cut a throat” was one of the most endearing, enduring and egregious characters to have participated in the Normandy offensive. Assuring a green eared twenty-one-year-old bag-piper Bill Millin that the latter would be a part of the “greatest invasion in the history of warfare”, Lord Lovat rendered friends and foe alike dumbfounded when he ordered a dazed Millin to play the pipe while carnage was being wrecked on the beaches of Normandy. For his exploits, Lord Lovat was awarded the Légion d’honneur and the Croix de Guerre by the French in addition to a Distinguished Service Order (“DSO”).

The Allies concentrated their assault on five beaches code named Utah, Omaha, Juno, Sword and Gold. Brigadier General Theodore Roosevelt exhibited a degree of unparalleled courage and composure at Utah Beach. Wielding a cane and a revolver, Roosevelt ailing from heart disease and arthritis, admirably helped his troops from being maimed and mutilated by the German gunners.

While the British troops along with their Canadian counterparts landed at the beaches of Gold, Juno, and Sword. But as Mr. Kershaw points out, the most abysmal carnage was reserved for Omaha Beach. “In all, the United States had landed some 55,000 men on D-Day. By far the greatest losses had been suffered on Omaha, where more than nine hundred were killed. For their heroism on Omaha beach, 153 men would receive the Distinguished Service Cross, America’s second highest award for bravery.” The losses would have been much higher, but for the breathtaking feats and razor sharp decisions made by the likes of Lieutenant John Spalding, Captain Joe Dawson and Sergeant Streczyk. Mr. Kershaw also highlights in agonizing detail the political shenanigans that deprived many a brave warrior from getting his due accolade. “Some of the medals received for extraordinary courage on Omaha should have been Medals of Honour – without doubt in both Spalding’s and Streczyk’s cases – but army officials far from the maw and horror on the front lines worried that ‘too many men would get the highest award for bravery and its significance would somehow be diminished.’” Blood boiling travesty! The failure at Omaha Beach was courtesy an astonishing intelligence blunder. The attacking forces were blissfully unaware of the fact that the 716th German Division was replaced by the more formidable and experienced 352nd Division.

To rub salt into the wounds, Omaha Beach also boasted some of the best prepared defenses of the entire Normandy coastline, with massive fortified bunkers filled with artillery, mortars, and machine guns that could sweep the landing areas with a vengeful crossfire.

But Mr. Kershaw’s best and most haunting narratives are reserved to describe the agonizingly lingering combat state of mind for many of the survivors. Post-Traumatic Stress Disorders (“PTSD”), survivor’s guilt, unfortunate suicides and restless bouts of living all constituted a heavy price to pay for these patriotic lion hearts who gave it all for humanity in an uncomplaining, untiring and undiminishing manner.

Mr. Kershaw does a yeoman service by bringing to our attention the sacrifices made by those who survived as well as those who were scythed down, just so that generations in future can lead a life of tranquility, peace and bliss. History however would never allow the unsuspecting to remain that way, and rightfully so. There would be intrepid souls like Mr. Kershaw to revive the spirits of the dead and bring to light their thrilling and selfless exploits. Exploits in performing which these magnificent men and women adopted an attitude that was chillingly eschatological!

The world is perennially indebted to these incomparable souls. LEST WE FORGET!