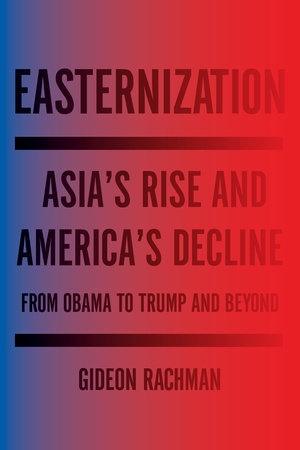 The widely acclaimed author of “Zero-Sum World” has authored yet another thought provoking and essential work in the form of “Easternization”. Mainly dealing with the seminal shift of both economic and political power from the hitherto formidable West to the unmistakably rising East, Easternization provides the reader an enlightening perspective into the gradual but invariable shift of the Centre of Gravity taking place in our globalized world, that has positioned the Eastern Economies as not mere pretenders to the throne occupied by the Western nations, but as genuine contenders to trigger a very regime shift.

Whether it be China’s audacious posturing on the South China Sea, or India’s increasing emergence as an economic behemoth; or a rejuvenated status of importance charactersing the African continent, it is obvious that the West’s hold over the world order is subtly but surely slipping. American hegemony which till now has almost been taken for granted by both its allies and adversaries is seeing significant cracks. The imperialism which once made the United Kingdom colonise almost a quarter or more of humanity is now a whimsical and tepid past. Imperialism exists only in an anachronistic form of a monarchy in the once powerful al conquering Kingdom. The European Union if not derelict is already riven with currency crisis and financial emergencies following the devastating recession of 2008-09.

Rachman also highlights the tilt of economic and political might towards the East by highlighting paradigm shifts in the attitudes of nations that were once considered to be the unshakeable allies of the West. Turkey, once an unabashed imitator of Western culture and traditions has now under the rule of an immensely devout Erdogan commenced looking inwards and has fast been assimilating the tenets of Islam. Banning the serving of alcohol within a few designated meters from the vicinity of a mosque (in a land that teems with mosques) is just one example of a radical perception shift. Similarly Hungary under the stewardship of the aggressive Viktor Orban is also adopting an attitude of inclusivity shutting out the West to the greatest extent possible.

Gideon Rachman also makes a fervent plea for a stable balance in the East-West relations with a view to preventing an intentional/accidental catastrophe in the form of a Great War. With most of the nations occupying both the West and the East boasting a dangerous arsenal of nuclear weapons, an unintended ruffling of feathers might lead to an incendiary situation. The last thing that mankind needs is an existence on tenterhooks. Rachman however feels that the process of Easternization would take time to attain completeness because of the presence of influential institutions such as the World Bank or the International Monetary Fund or even SWIFT and ICANN in the Western Geographies. These institutions cater to the needs of the entire globe and hence it would take an enormous effort for parallel like institutions to be established in the East, although the Asian Infrastructure Investment Bank (AIIB) initiative by Beijing may be viewed as a comparable institutional beginning.

To conclude, Easternization provides an invaluable perspective on the demographic shift in power that is now taking place from the once powerful West towards a surging East. We are on the cusp of a historic and exciting time of change!