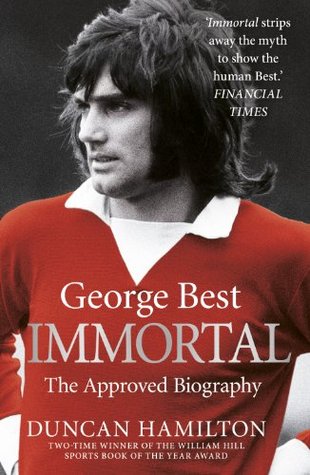 It inevitably takes the candid brilliance of a rare author to chronicle the life of a coruscating genius. Duncan Hamilton proceeds to do exactly that in “Immortals”.

Without sympathy or sycophancy, Hamilton proceeds to lay bare the turbulent life of one of the greatest and gifted footballers of all time. A life characterized by triumph and tragedy in equal measure. Every superhuman feat that George Best produced on the footballing field was neutralised in equal measure by his antiques with the bottle or in bed.

Every mystical feint was overshadowed by an indiscriminate fling; every magical flick subsumed by a flagrant flow of booze. However as the marvelous book aptly demonstrates, George Best would be most remembered for what he did on the field rather than what he became off it.

He was the Best that football could ever offer. A banner poignantly unfurled by his fans at his funeral gave clinical testimony to this fact. It read “MARADONA GOOD; PELE BETTER; GEORGE BEST!!! Read this book and re-read it!!! 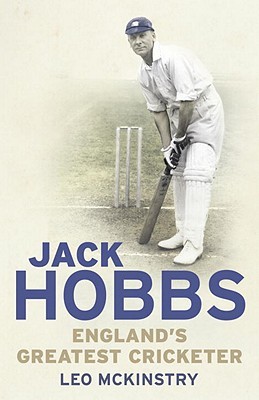 61,670 runs at an average of 50.70; 199 centuries and 273 fifties make Jack Hobbs the absolute don of the statistical spectrum in cricket. Devastating on the field and dignified off it this legend strode the cricketing world like a colossus brooking no opposition and breaking every possible record. In this magnificent chronicle of the life and times of Hobbs, Leo McKinstry enthralls the reader by transporting him/her back into time – a time which when viewed with the fanatical cricket lover’s mind’s eye allows the re-creation of the fantastic batting and fabulous fielding of McKinstry’s protagonist. The sure technique, strong hands and stealthy movements while fielding all flash by in nostalgic waves. Of particular brilliance is the description of Hobb’s opening partnerships – initially with the Yorkshire giant Wilfred Rhodes; later with the Irresistible Tom Hayward and an unsung hero Andrew Sandham and finally with the illustrious Herbert Sutcliffe, whose association with Hobbs transcended the mere notion of partnership and became a veritable English Institution. There are cricketers who are respected and regarded highly. However it is a mere handful who merit the honour of being revered and of such a handful, Sir John Berry Hobbs stands at the very pinnacle! This book is an indispensable read for both the self proclaimed as well as the well acclaimed cricket fanatic!

“Archie Jackson The Keats Of Cricket” is a surreal tribute by the indefatigable David Frith to a preternatural cricketing talent whose budding career was tragically nipped. Archie Jackson, a contemporary of Sir Donald Bradman was all of 23 years old, when he breathed his last, having been stricken by a virulent bout of Tuberculosis. A prodigy with the bat, he had signaled his intentions with a century on debut against the ‘Old Enemy’, a mere four years ago.

David Frith, with his usual twin pronged approach of method and meticulousness, vividly explores the emergence, exploits and ultimately the end of Archie Jackson’s professional and personal life. Employing a judicious blend of pathos and facts, Frith brings to life the optimistic, lovable and gentlemanly personality of Archie Jackson to life. Deft leg-side batting and regal cover drives compete with acts of magnanimity and tales of astounding humility.

In an eminently nostalgic forward, the late tearaway English paceman and the scourge of the Aussies in the infamous ‘Bodyline’ series Harold Larwood poignantly recalls his brief but memorable battles with Archie Jackson. He concludes by emphatically exclaiming that he for one could never forget the Australian master.

Nor shall any one who has read this beautiful little gem by David Frith!

“The oblique paradox of propaganda is that the lie in the throat becomes, by repetition, the truth in the heart.”
John Grierson

Haruki Murakami’s latest and most eagerly anticipated offering “Colorless Tsukuru Tazaki and His Years Of Piligrimage”, is a hollow disappointment, a meek concoction of reluctant whorls and a flawed attempt at replicating expected magic.

Writing or rather, struggling in a painstakingly forced “Murakami-esque” style, one of the most revered and adored writers of our times, constructs layer upon layer of the paradoxical grotesque and the gentle. But instead of the usual sizzling outcome that has enthralled and enraptured millions of fans across the globe, the end analysis is a forgettable fizzle, a mere tendril of a tale that wafts around painfully before invariably vanishing into gentle oblivion.

Tsukuru’s story of colours is alas bereft of all elements of colour and also is devoid of substance – substance which otherwise constitutes the most glittering and prominent jewel in the repository of Murakami’s collection of gem stones. Tsukuru Tazaki along with four of his friends forms a unique ‘harmony’, a collection of individuals the sum total of which is greater than the clichéd components constituting the whole. The last names of each of Tsukuru’s friends symbolize a particular colour: Kei Akamatsu (Red); Yoshio Oumi (Blue); Yuzuki Shirane (White) and Eri Kurono (Black). follows This close camaraderie and sworn allegiance is shattered without warning when Tsukuru is abandoned by the rest in a manner, abrupt and sudden.

What follows is not only sixteen agonizing years of untold suffering for Tsukuru, but also an inexplicable disappointment for the reader. Weaving a weak and unfulfilling plot involving metaphysical machinations and carnal interludes (albeit in dream states), Murakami stumbles along with Tsukuru as the latter unravels the truth behind his unsympathetic rejection and ostracizing. Vestigial fingers, peddlers of token ‘exchanges’ of death; interminably long descriptions of Japanese Railway stations and techniques of swimming all contrive to confound and confuse. However the book is not completely denied of the shades of Murakami magic. In isolated phases, the author teases and flatters the reader with some mesmerizing skills before indulging in deception.

The initial half of the story involving the meeting of the five friends, merging of their minds and marriage of their sentiments makes for some astounding reading. Tsukuru’s eventful trip to Finland to meet Eri is embedded within the confines of passages that can only be termed electrifying.

When the typical ventures into the realms of the atypical the results are usually mixed. However when the atypical forces itself to metamorphose into the typical, the consequences as exemplified in no small measure by “Colorless Tsukuru Tazaki and His Years Of Piligrimage”, are just what they unavoidably are – Calamitous!

John Maynard Keynes and Friedrich Hayek, two high priests of finance poured forth from their respective ideological pulpits more than eighty years ago. Their polemics and preaching had such reverberations that they spawned a new divide of loyal pupils. A divide that carries on the legacy long after their Masters have gone.

On one side of the divide resides the freshwater tribe. Advocating theories such as bounded rationality, efficient market hypotheses and rational expectations, the followers of Hayek abhor Government intervention in the functioning of markets. Their rivals, the saltwater practitioners emphatically proselytize Keynesian Principles and reiterate the need for Government intervention to prevent the untrammeled ravages of an invidious market.

In this splendid work, Nicholas Wapshott brings to life the towering and intimidating personalities of both Keynes and Hayek. Using exemplary simplicity, Wapshott distinguishes the key and core tenets separating Keynesian Principles from the Austrian School of Thought. As he proceeds to unravel the deep debates and intense implications of the clash between microeconomics and macroeconomics, the reader is roused to interest as Economics absolutely ceases to be a dismal Science.

A stupendous collection of nine Science Fiction stories penned by the authority on his preferred genre – Issac Asimov. The stories touch upon aberrant behaviour by robots, evocative telepathy underlying human interactions with extraordinary creations of metal agglomerated with complex circuitry and the perennial conflict between man and machine.

This thought provoking assimilation of mind numbing stories bear ample testimony to the skills and far farsightedness of a genius who was way ahead of his time!

Gideon Haigh is universally acclaimed as the greatest living cricket author. However it is not cricket that attracts his thoughts in this small book. Haigh passionately dwells into the woes plaguing the automobile industry in Australia and succinctly traces the imperiled path to doom traversed by this once booming industry.

Government subsidies, import tariffs, ever changing consumer preferences all contrive together to coalesce into a picture that is tragic, a future that is for all practical purposes immensely bleak. Haigh’s clarion call for the preservation of the automobile manufacturer’s future is poignantly captured in his evocative chapter dealing with Holden’s car manufacturing plant.

A work to showcase the myriad versatility of one of the most formidable journalists of our generation.

A rousing anthology of some of the most peculiar, phenomenal and pernicious incidents to have burnished and tarnished a cricket field in equal measure. The incidents are more of “Eye witness” accounts as they are narrated by the protagonists in their own words and employing their own emotions.

Whether it be Dennis Lillee brandishing an aluminum bat, or Derek “Deadly” Underwood scoring his first ever first class century after 22 seasons, the stories all have a surreal tinge to them. While some of the tales such as Michael Holding’s fiery burst at the Oval to leave England bruised and battered are common folklore others such as a Buxton pitch covered with snow in June and Asif Din scoring a breathtaking century to pull a rabbit out of the hat against Sussex are uniquely singular in their bizarre occurrence.

A rollicking read for any cricket aficionado!

He wrote the finest ever book on cricket. But he was also a man of remarkably versatile talents and personalities. Dave Renton pries open the life of Cyril Lionel Robert James and what is revealed is a kaleidoscopic variety of accomplishments.

A Trotskyite, a Marxist for life, intellectual, magnificent orator, statesman, a fervent advocate of African and Black rights, philosopher, author and cricket fanatic, James represents one of the most influential characters defining some of the most landmark events illumining the modern milieu.

Dave Renton does ample justice to a highly distinguished career in this condensed but carefully crafted book. James’s dalliances with feminist intellects, his alliance and break-ups with Trotsky, Nkrumah and Eric Williams, his nurturing friendship with the West Indian cricketing stalwarts such as Learie Constantine, and Frank Worrell, his incarceration in the United States for being an avowed communist all make for some stirring reading.

C L R James thoughts belong with equal relevance to the past, present and future!