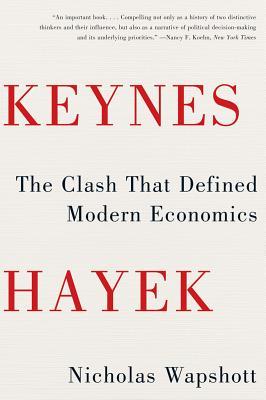 John Maynard Keynes and Friedrich Hayek, two high priests of finance poured forth from their respective ideological pulpits more than eighty years ago. Their polemics and preaching had such reverberations that they spawned a new divide of loyal pupils. A divide that carries on the legacy long after their Masters have gone.

On one side of the divide resides the freshwater tribe. Advocating theories such as bounded rationality, efficient market hypotheses and rational expectations, the followers of Hayek abhor Government intervention in the functioning of markets. Their rivals, the saltwater practitioners emphatically proselytize Keynesian Principles and reiterate the need for Government intervention to prevent the untrammeled ravages of an invidious market.

In this splendid work, Nicholas Wapshott brings to life the towering and intimidating personalities of both Keynes and Hayek. Using exemplary simplicity, Wapshott distinguishes the key and core tenets separating Keynesian Principles from the Austrian School of Thought. As he proceeds to unravel the deep debates and intense implications of the clash between microeconomics and macroeconomics, the reader is roused to interest as Economics absolutely ceases to be a dismal Science.