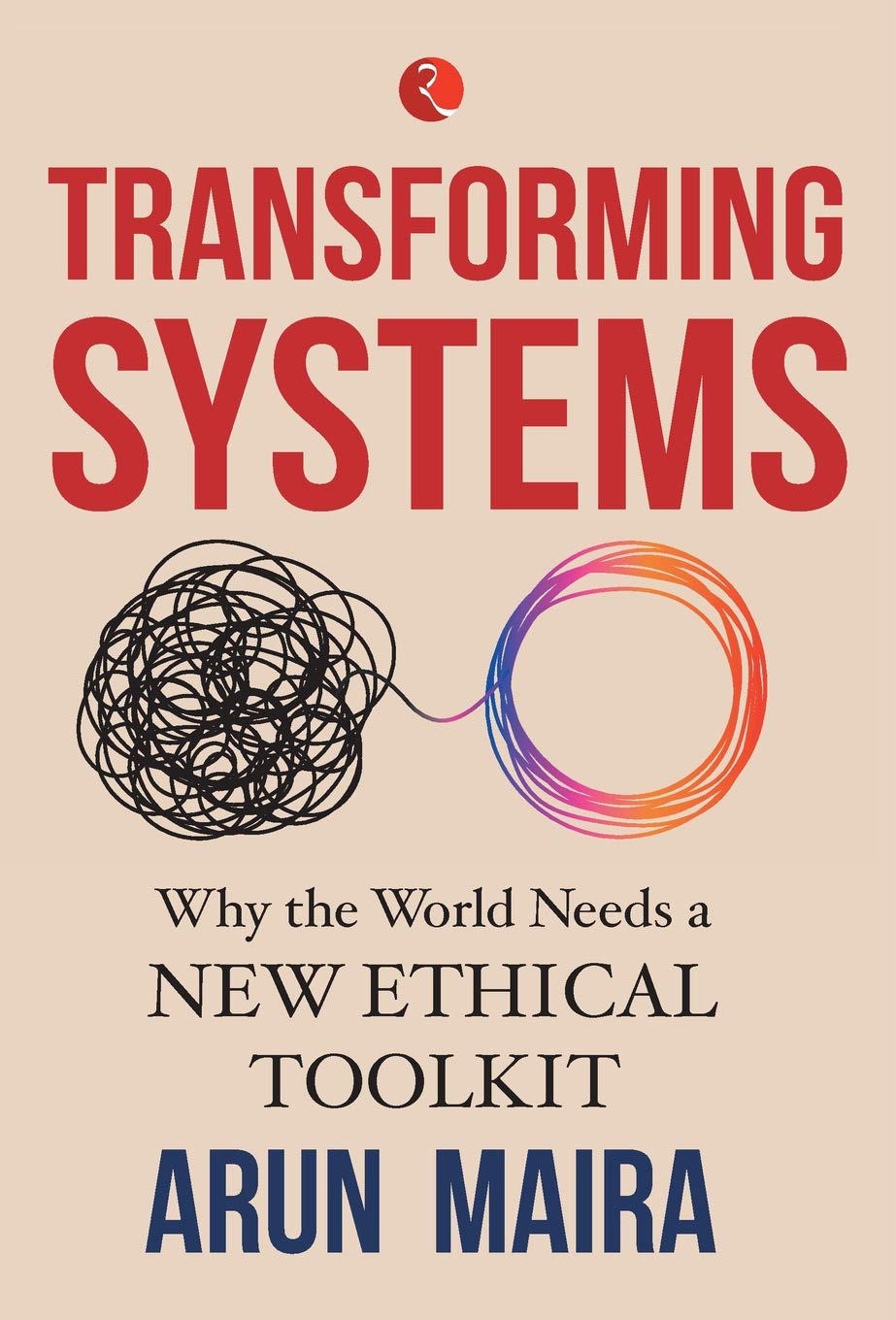 Paraphrasing Robert Frost who existentially suggested that the capacity to question the purpose of one’s own existence, for which there is no easy answer, is the big joke that god has played on humans, management consultant and former member of Planning Commission of India, Arun Maira lays the groundwork for articulation in his book, “TRANSFORMING SYSTEMS; Why the World Needs a New Ethical Toolkit.” Divided into four parts, the book discusses a new ethical framework to be adopted that would veer away from the ‘business as usual’ approach thereby not only furthering stakeholder ambitions but also fulfilling societal and social aspirations.

Part A titled ‘Aspirations to improve the world’, draws on Mr. Maira’s extensive professional experience that saw him execute challenge roles, first at the Tata Group of Companies and subsequently as India Chairman of Boston Consulting Group. Using fictitious names, but pertaining to real life examples, Mr. Maira leads the reader into the lives and minds of affluent and highly successful entrepreneurs, who undergo a life-altering transformation as they begin to introspect the real nature and purpose characterising their living.

Part B titled ‘Searching for a new Paradigm’ demonstrates a paradigmatic shift that facilitates a refreshingly new medium of thought and action on the part of the various protagonists identified in Part A;

Parts C and D named, Reorienting our minds and Becoming a leader respectively, conclude by instituting the measures to be adopted and principles to be instilled for consummating the ethical transformation.

Mr. Maira asserts the requirement and relevance of three orientations for anyone aspiring to make the world better: Systems thinking Ethics of citizenship Deep listening. Mr. Maira brings to the attention of the reader the existence of three types of systems:

One is “engineered” systems. Engineered Systems refer to “systems designed by humans, following scientific disciplines, to produce desired outcomes. Machines are the most common manifestation of this class of systems, so are top down planning systems that try to control inputs and outputs of organizations.

The second class of systems is “chaotic” systems. “These are formed by the interactions of millions of independent particles or free agents. Chaotic systems can produce surprising outcomes. The example of a butterfly flapping its wings in Brazil that causes storms in Hong Kong is often cited to illustrate this characteristic of chaotic systems.

Employing Jonathan Haidt’s theory of moral codes, Mr. Maira dwells on the need to balance the interests of shareholders with the embellishment of society. Haidt, propounded that every individual bears within himself/herself both an elephant and a rider. The animal and the rider are perennially at cross purposes in so far as the battle for control and desire for power is concerned. The rider intends to usurp control by bringing the elephant under his command but the elephant is constantly trying to throw or unseat the rider. Hence the only option available for the rider is to keep moving in tandem with the elephant. Haidt uses this parallel to demonstrate the symbiotic relationship between organizations and the global community that is absolutely vital for maintaining cultural, economic, social and civic balance. However, as Mr. Maira illustrates, in a world beset by the rampant reach of capitalism the concept of egalitarianism and altruism is obfuscated by an untrammeled desire to accumulate and prosper. People living at the ‘bottom of the pyramid’ are viewed more as an entrenched category that can be ignored rather than as a powerful set of potential customers, who if and when empowered possess an overarching potential to usher in a transformational and positive change.

In “Transforming Systems”, Mr. Maira relies on the works of a number of management experts, a fondness for whose principles he hardly bothers to disguise. Of especial mention are, Chris Argyris, the proponent behind the concepts of ‘espoused theories’ and ‘theories-in-use’; Jim Collins, the management guru of “Built to Last” and “Good To Great” fame; and George Lakoff, the American cognitive linguist, philosopher, and author of Moral Politics: How Liberals and Conservatives Think. However, one author whose strands of thinking permeate numerous pages of Mr. Maira’s book is Peter Senge, the author of “The Fifth Discipline.”

Mr. Maira acknowledges that ushering in a revolutionary shift in the engrained beliefs that considers profitability and shareholder activism as uncompromising tenets would be a Herculean task. Relying upon the words of Thomas Kuhn, Mr. Maira says, “Kuhn explains how deep-seated beliefs, such as the story of creation and the centrality of Earth in the universe, become embedded into societies’ institutions and power structures. He says that to challenge such ideas can even be life-threatening, as it was for scientists who discovered that the story of creation was a myth and that the earth went around the sun.”

Encouragingly, there can be seen slivers of hope in the form of spectacular confessions and scintillating volte faces that are shaking the very edifice of capitalism. Sean Parker, the founding president of Facebook, confessed at a conference in Philadelphia that he was ‘something of a conscientious objector’ to social media. Similarly, Chamath Palihapitiya, an early senior executive at Facebook, joining the company in 2007 and leaving in 2011, also jumped on the Parker bandwagon when he declared, ‘The short-term, dopamine-driven feedback loops that we have created are destroying how society works. No civil discourse, no cooperation; misinformation, mistruth. This is a global problem. It is eroding the core foundations of how people behave by and between each other. I can control my decision, which is that I do not use that shit. I can control my kids’ decisions, which is that they are not allowed to use that shit.’

In his introduction to the book, Mr. Maira quotes Sumant Moolgaokar, popularly known as the architect of Tata Motors: ‘amongst the resources man needs, those that take the longest to grow are trees and skilled men and women.’ It takes even longer for men and women with a lateral bent of mind to enrich society to grow and be nurtured. But as Mr. Maira tellingly demonstrates in his book, the wheels are already in motion.