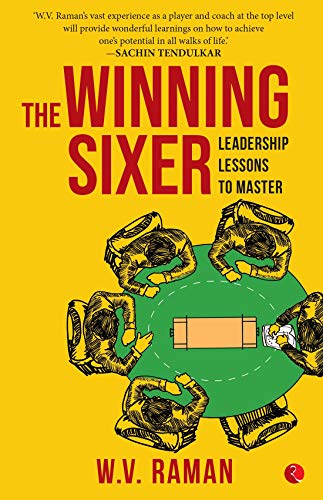 Woorkeri Venkat Raman was a former opening batsman who represented India at the highest levels of international cricket. A lazy elegance embodied his approach at the crease. The southpaw, now the coach of the Indian Women’s National Cricket team, brings to bear the same languid approach that characterized his batting to the realm of writing. In a book titled, “The Winning Sixer: Leadership Lessons to Master”, Mr. Raman dwells on the quintessential facets that symbolizes a leader as he/she goes about performing feats which otherwise elude the most of majority.

Employing a narrative style that is engaging and easy on the eye – an art for which he was renowned when executing his role as a master craftsman with a willow in hand – Mr. Raman resorts to providing examples of stellar leaders in the domains of both sports and non-sporting spheres such as business, in combination with easy to remember principles grouped under a single alphabet. Lest the reader become apprehensive, Mr. Raman neither takes refuge in a deluge of incomprehensible ‘isms’ – as is unfortunately the fashion these days – nor tries to obfuscate the main purpose in a maze of verbiage.

Mr. Raman chooses his examples with care and clarity. Punctuating somber and serious instances with incidents that have humour embedded within, Mr. Raman ensures that the reader’s attention span remains rooted. A classic example is one that involves the West Indian legend and arguably the world’s greatest all-rounder Sir Garfield Sobers. To quote Mr. Raman, ‘Sir Garfield (Gary) Sobers, the former West Indies captain, made a declaration to prevent a Test match petering out into a boring draw. West Indies lost that Test and Sir Gary was severely criticized. When he reached the next venue, he was asked at immigration, “Have you anything to declare, Gary?” He replied with a wry smile, “Not after the last one, my friend”. Even for someone as revered as Sir Gary, there is no escape if a calculated risk backfires in sports.’

Mr. Raman attempts to instill various tenets of leadership in a manner fundamental and lingering. He dishes out wisdom in ‘batches’. Hence we have the ‘5 Cs’ (credibility, clarity, connect, control and conviction), rubbing shoulders with the ‘5Ts’ (Truth, Time, Tango, Thrift and Theatrics). Each element is then related to a real life incident involving the travails, tribulations and triumphs of famous personalities. For example, in describing the seemingly peculiar element of ‘Tango’, Mr. Raman holds forth: ‘Successful leaders are alert about their listening-to-talking ratio. They realize the importance of getting as much information as possible from others, which greatly helps in their decision-making. In fact, I have heard business leaders state that the one who listens the most is the best communicator.’ There must be reasonably equal participation in a conversation, with the listening ratio higher than the talking ratio. Tango encapsulates these two important aspects. Equal participation and yet achieving a higher ratio of listening to talking is the hallmark of Stephen Sackur, who anchors HARDtalk on BBC TV.’

Similarly, the indefatigable spirit brought to their game by Rahul Dravid and Anil Kumble get a special mention in the book. Mr. Raman, most importantly conveys to the reader a fact which is mostly experienced only by a sportsman/woman and the angst relating to which remains largely underappreciated, if not downright unappreciated. A sportsman, beset with a serious injury and attempting to make a comeback faces a future that appears to be not only unpredictable, but insurmountable as well. The mindset of the affected persona as he/she attempts to get his/her professional career back on the rails, is illustrated in a deeply poignant manner by the author. Resorting to the heart warming and commendable examples set by Laxmipathy Balaji, a former India pacer and Pullela Gopichand, former All England Open Badminton Championships winner and the much lauded coach of India’s most famous badminton champions of the likes of Saina Nehwal and P.V.Sindhu, Mr. Raman demonstrates how both sportsmen refused to accept injury as a cul-de-sac in their career, before battling all odds to triumph over adversity.

Similarly, the sacrifices and phlegmatic decisions made by Sania Mirza to focus more on doubles thereby letting go of her aspirations to make her mark as a singles player of prominence is described by Mr. Raman in a very lucid and articulate manner. Mr. Raman also exhibits his undisguised admiration for Richard Branson, the maverick entrepreneur par excellence and Frederick Forsyth, the master story teller of the action genre. Talking about Richard Branson’s and his ‘out of the box’ Edward De Bono like exploits, Mr. Raman elucidates: “It is also interesting that he is advocating employment for felons/ex-offenders who have finished their prison sentences. The rationale is that if they are not given jobs, they might be forced to go back to committing crimes, which is an absolutely different way of seeing things.’

Two other sporting personas who make frequent appearances in the book on account of their leadership skills are Kapil Dev, former World Cup winning cricket captain of India and one of the world’s greatest ever all-rounders, and Jeev Milkha Singh, the son of legendary Olympian athlete Milkha Singh, and an Indian professional golfer who became the first player from India to join the European Tour in 1998. Jeev Milkha Singh has won four events on the European Tour, becoming the most successful Indian on tour.

But the one story that warms the very cockle of the reader’s heart is the one involving Vasudevan Baskaran, who skippered the Indian hockey squad that bagged the gold medal in the 1980 Olympics. In describing ‘Giving’, one of the ‘5Gs’ which Mr. Raman whips up, he states: …” Around that time, by sheer chance, he was asked to take over as the coach of the Indian junior hockey squad. But, given the volatile situation prevailing within the hockey fraternity then, he was not sure if the time was right, and therefore, he asked for time to think over the offer… He was not sure if he himself was updated enough as a coach, because hockey had undergone some changes in format since the time he had last played the sport. Then one evening, as he was walking past a small piece of land, he saw a young boy wielding a hockey stick in a limited space. Seeing that child, a lot of emotions ran through Baskaran and he made the decision to take up the offer, but only after completing a coaching course. The important point to note is the high sense of responsibility champions have while giving.”

“The Winning Sixer” is interspersed with incidents and illustrations that both inspire and facilitates introspection. More than everything, it also provides confidence to the reader that leadership need not be a trait restricted to a chosen or privileged few.