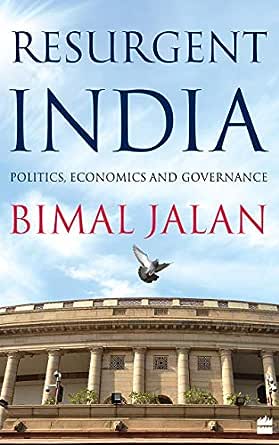 Resurgent India is a sequel to Dr Bimal Jalan‘s book, Emerging India, released in 2012. Resurgent India looks to the future and identifies both advantages that need to be exploited and deficiencies that need to be overcome in the spheres of politics, economics and governance. Whilst lauding the progress and prevalence of democracy that has remained unimpeded even in the face of strong dissent, discord and despondence, the book also highlights in a no-nonsense vein some of the inherent travails such as political opportunism, corruption and public sector-private sector dichotomy that tarnish the functioning and role of democracy in India.

Post waxing eloquent on the entrenched system of democracy in India – rightfully so – Mr. Jalan highlights some of its tribulations that are applicable to both democracies in general and the Indian context in particular. The dynamics of coalition politics where majority parties are also held to ransom by minor parties backing the former, sabotaging of the Parliament by parties holding majority and a cognitive dissonance that ensures that service to the public is obfuscated by the self-serving interests are all explained in a crisp and impartial manner. Political Opportunism, which according to Mr. Jalan ‘is a euphemism that is commonly used in the literature of behavioural economics to described the bias among elected representatives at different levels to divest resources under a government programme to their own villages constituencies or states, is also a scourge that irritates the Indian democracy no end.

Mr. Jalan optimistically informs his readers that there are very few developing countries that are as well placed as India to derive maximum benefit out of the paradigmatic shifts, courtesy globalization, that have ushered in revolutionary changes in production technologies, international trade movement and deployment of skilled manpower. This advantage can be garnered by India on account of its unique strengths in the form of delivery capabilities for a knowledge economy. coupled with the functioning of autonomous institutes of excellence such as the IITs and IIMs.

Mr. Jalan argues that in order to tide over the quagmire that blurs the roles and responsibilities of the private and public sectors in the country, there needs to evolve a compact. This compact, in his own words ought to be ‘political-bureaucratic’ in nature and one that is based on a well-defined division of responsibility and accounting.

From a managerial excellence angle, Mr. Jalan emphasizes the requirement on the part of the chieftains of India Inc. to enhance and embellish international competitiveness in their respective industries. This, he argues, may be done by strategically orienting and adopting policies and practices that improve productivity and efficiency. India, to its credit seems to have absorbed this philosophy wholeheartedly. For example, in the Fast Company’s ‘The world’s Most Innovative Companies 2018’ listing, as many as 10 Indian companies spread across variegated sectors, made the cut. Prominent amongst these were Reliance Jio (‘For putting Indians on the fast track with cheap internet’); Paytm (‘For erecting a marketplace off of its mobile payments’); EM3 AgriServices (‘For helping farmers rent equipment short term’); Narayana Health (‘For avoiding surgeries with nuclear medicine’); and Jubilant FoodWorks (‘For cooking up mayo burgers at Dunkin’ Donuts’).

Further, in the domain of Science & Technology, there is a need to spur the progress of Research & Development (“R&D”) in India. Currently the sum allocated to further R&D activities is a meagre 0.7% of Gross Domestic Product. A bulk of this allocation is the preserve and prerogative of the Central Government. The State Governments should also assume an equally responsible role by taking on the mantle of instituting R&D measures and mechanics within their respective States.

In a chapter dealing with reforming the banking system, Mr. Jalan initially identifies the ails that plague Indian banking such as a burgeoning proportion of Non-Performing Assets (“NPAs”), lack of legislative reforms for speeding up insolvency and bankruptcy processes and Human Resources (“HR”) constraints. As an ameliorative prescription, Mr. Jalan recommends a basket of measures such as better processes of credit and risk appraisal, embracing new technologies, treasury management, product diversification, better internal control and adopting the requisite external regulations for higher standard setting.

Dwelling on Trade, Investment and Capital Flows, while acknowledging that India possesses an adequate buffer of foreign exchange reserves to meet exigencies hitherto not envisaged – a classic example being a rise in oil price in 2018 – Mr. Jalan posits a few steps in the spheres of fiscal deficit management and servicing of long term commercial debt etc. For example, he warns that it would be hard for any country to sustain a fiscal deficit north of 3-4 percent on a consistent basis. Advising alacrity, in the realm of long term debt, Mr. Jalan advises that for any length of time, debt servicing on all external debt should not exceed 20-25 percent of receipts from exports and services.

In his Chapter dealing with administrative reforms, Mr. Jalan expresses his frustration at the bureaucratic red tape that puts a spanner in the works in so far as furthering business in India is concerned. As a startling example, Mr. Jalan educates his readers about an apathy that requires at least thirty different clearances involving several agencies at the Centre and the states for incorporating even a modest-sized industrial factory. The solution as per Mr. Jalan is a self-certification mechanism with appropriate inbuilt checks and balances.

Also a brazen interference by the political leadership in the workings of the permanent civil service ensures that the concept of separation of powers tantamount to mere lip service. According to Mr. Jalan, the Government should completely dissociate itself from the implementation of social and civic measures and leave the job to the bureaucrats. This can be accomplished by pruning the flagrant proliferation of ministries and consequently, ministers, both at the Centre and the State level. As an illustration, “since 2017, in addition to the traditional combination of ministries such as defense, finance, home, industry, commerce etc., India also has ministries ranging from ‘Micro, Small and Medium Industries’ to ‘Labour and Employment’, Skill Development and Entrepreneurship’, ‘AYUSH’, ‘Culture and Tourism’, ‘Social Justice and Empowerment’, ‘Youth Affairs’, and so on.”

But the most compelling Chapter in the book is one titled “Corruption Barometer.” This is a Chapter to which every reader would be able to relate to having invariably come face to face with corruption of some form or other. Corruption is a perennial feature characterising the landscape of Indian economy. As per the latest Corruption Perception Index and Global Corruption Barometer rankings compiled by Transparency International, India’s score is 40 on a scale of 0 to100 where 0 is ‘totally corrupt’ and 100, ‘very clean’. Mr. Jalan elucidates some of the measures instituted by the Narendra Modi led BJP Government to contain, if not obliterate corruption. Predominant amongst such initiatives are strengthening the Prevention of Corruption (Amendment) Act, 2018, giving more teeth and bite to The Right To Information (“RTI”) Act, inclusion of an integrity pact in major purchases, ratification of the United Nations Convention Against Corruption (“UNCAC”), placing information on assets accumulated by government officers in the public domain etc.

Mr. Jalan bemoans the received wisdom that shrugs away the evil of corruption as a ‘necessary evil’. In fact, it has been propounded in political as well as business circles that enriching the government servants and public authorities constitutes ‘costs of conducting or discharging one’s business.’

Mr. Jalan’s recommendation to root out corruption that currently permeates the bureaucratic set up is two-pronged. According to him corruption must be tackled from both the supply as well as the demand side of economics. He proposes the following structural reforms to ring fence economic progress and societal development from the tentacles of corruption:

‘Resurgent India’ is a passionate discourse initiated by an equally passionate and learned intellectual with an avowed objective of embellishing India’s social, economic & civic prospects. Citizens of India would do well to not only take notice of what Mr. Jalan proposes, but also by acting in a responsible manner both as voters and participants in a democratic process to usher in a resplendent future that is a true representation of a Resurgent India.