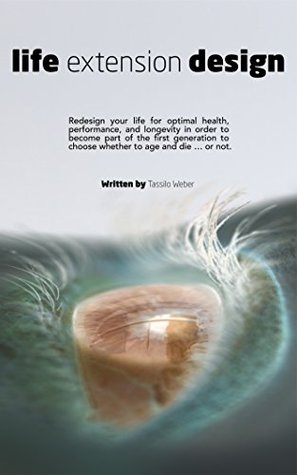 Combining the known and the radical – with a checklist thrown in between – Tassilo Weber’s “Life Extension Design” is a curious if not intriguing read. Hopping onto the bandwagon that conveys the lure of longevity, Mr. Weber proposes a set of measures that alternate between the logical and the skeptical for leading a life in longevity, if not in perpetuity.

“Clean up your social media channels and start following Peter Diamandis (also subscribe to his Abundance Insider), Ray Kurzweil, Aubrey de Grey, Singularity University, and Futurism. Join Facebook groups around the topics of longevity and life extension. Subscribe to Maximum Life Foundation’s newsletter on maxlife.org. Make forever-healthy.org your life extension Wikipedia. Inform yourself about rejuvenation therapy providers on www.reju.tech. Join meetups with life extension communities in your city if they exist. If not, consider traveling to other places to meet with such communities. Meeting like-minded people is a priceless experience. Also check out the RAAD (Revolution Against Aging and Death) Festival in San Diego. It’s the most important life extension event right now.”

Even though the aforementioned paragraph appears at the fag end of the book, they more or less set the theme for the reader. A visible pattern emerges as Mr. Weber enthusiastically feeds off the effervescence (some would argue far-fetched) of the 71-year old American inventor and futurist Ray Kurzweil. Whether it be citing the fact that Mr. Kurzweil consumes an astounding seventy-seven supplements per day (yes you read that right) or deifying him as being one of the pioneers in the quest for extending lifespans, Mr. Weber leaves no room for guess work as to hi predilections and inclinations.

The appeal and novelty of Mr. Weber’s book lies in the sequential steps which he charts out for enabling the reader to lead a healthy, stress-free and contended life. These steps would pave the way for the ultimate extension of life when the concept ultimately fructifies. Based on the concept of Design Thinking, these steps are:

Three key elements in each of the aforementioned phases according to Mr. Weber are Open, Experiment and Working. “Open means that you haven’t started to tackle it yet. Experiment means that you filled out a Self-Improvement and an Experiment Frame and are in the process of experimentation, while there is still an existential gap between present you and future you. Working means that this gap is more or less closed, and for now you’ve found a set of habits that makes you the life extender you want to be in that area.”

Found within each of these phases is a set of to-do things that holistically go towards improving both the physical and the mental well-being of the reader. While usual suspects such as Yoga, Meditation, exercise and dietary regimen make the obvious cut, more unconventional are some of the “Kurzweilian” proposals. For e.g. “For advanced prevention, or rather an emergency back-up in case you don’t make it till the point when rejuvenation technologies are available, you can make a cryonic preservation contract with Alcor or Cryonics Institute. To cover the costs, you have to take out a life policy and pay an additional yearly membership fee to your supplier of choice. It is a somewhat laborious back-and-forth process to set up a contract and make all the arrangements to ensure your head will be frozen right in time after your heart stands still, but it’s absolutely doable, even if you live outside the United States where both suppliers reside.”

To the credit of Mr. Weber, the more sweeping and non-traditional measures are not suggested as either sacrosanct or uncompromising. He along with the more widely followed approaches, refers to these as ones that are available.

On the whole “Life Extension Design” is a book that has elements of surprise as well as sense.