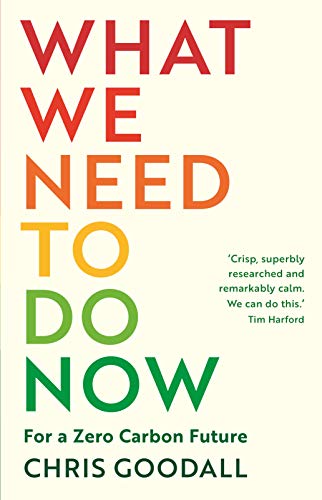 In an eminently readable, superbly researched and extraordinarily crisp book, businessman, author, and climate change expert, Chris Goodall sets out a range of what he terms are urgent measures which Britain has to adopt, if it has to cut its Carbon emissions down to zero. Currently, the UK Government on Climate Change has identified a rather bleak scenario, whereby, the year 2050 would see only about 60& of all electricity being generated from renewables. The remaining gas generation, as Mr. Goodall informs his readers, would result in over 150 million tonnes of CO2  emissions, collected and permanently stored in depleted North Sea oilfields at prohibitive costs.

Spanning an entire spectrum with reasonable and radical proposals constituting its two extreme ends, Mr. Goodall’s suggestions would not just involve significant monetary outlay but also necessitate a paradigm shift in otherwise well entrenched beliefs. The following is a summary of the salient takeaways of Mr. Goodall’s recommendations:

Mr. Goodall postulates an audacious plan to increase renewable electricity generation twenty-fold. This will not only take care of the country’s electricity needs, but would also generate spare electricity. Such spare electricity, Mr. Goodall states may be converted into Hydrogen, which in turn may be utilized to manufacture power when either solar or wind energy are sparse. Electricity generated in the form of Photovoltaic cells, onshore wind farms and offshore turbines are a few potential alternatives. Hydrogen generated via a method of electrolysis is also an avenue that needs to be explored since Hydrogen in addition to possessing a high energy content, also brings to the equation the virtues of a near zero carbon footprint. Companies such as Statkraft are already realizing the enriching benefits of Hydrogen as a store for surplus renewable energy. A gas grid operator in the Netherlands, Gasunie, is embarking on a project to convert Hydrogen into low carbon aviation fuel. Another company Sunfire, using an equipment provided by Climeworks, a Swiss venture, is planning to develop an aviation fuel refinery by taking recourse to an innovative technique termed Direct Air Capture

Mr. Goodall advocates both ownership and operations of renewable energy resources by towns and cities. Such urban ‘microgrids’ would be on the same lines as the German ‘stadwerken’ distributing greater than 60 percent of all German electricity. A comparable example is also provided by a technology in the United States popularly known as LO3. This microgrid in Brooklyn, facilitates homes and businesses to buy and sell electricity from each other.

Homes in the UK are responsible for 15 percent of the domestic emissions, predominantly via burning of gas in central heating boilers. The solutions offered by Mr. Goodall are a complete shift to electricity, switching away from Methane to hydrogen and insulation of all homes with solar panels on the roofs. A whopping million homes a year would need upgradation to achieve Carbon neutrality by 2050.

Mr. Goodall informs us that more than a quarter of emissions in the UK is courtesy, transport. His solution is for transportation to go ‘electric’. Improving public transport, using car-pools, having dedicated lanes for bikes on the lines of some of the cities in The Netherlands, and seriously concentrating on the vehicle-to-grid battery storage technology, ought to be the way forward.

Mr. Goodall bemoans the fact that the British constitute one of the heaviest users of air travel (emitting 7 percent of carbon in the process). While alternative substitutes such as using vegetable oils and bio fuels instead of aviation fuel/jet fuel is a possibility, the costs attached to such a radical alternative are putting it mildly, obscene. For e.g. as r. Goodall highlights, “at cruising altitude, a large jet using 100 percent bio fuel would consume the equivalent of 40,000 square meters of palm oil production an hour.” So what are the possible and practically implementable alternatives? Developing sources of synthetic fuel made from hydrogen; Rewilding Britain by funding projects of afforestation; and self-imposed curbs on non-essential flying

Around 3-4 percent of UK’s carbon emissions are attributable to the fashion industry. This is essential because of what Mr. Goodall terms to be the working of a ‘linear economy’. The linear economy commences with extreme environmental pollution, in countries of manufacture, and is followed by a limited period of use, and finally concludes with an intractable waste disposal problem. The choices offered by Mr. Goodall in this sphere are pretty rudimentary and fundamental such as buying fewer, high quality clothes and prolonging their use; restricting purchases to shopping at vintage and charity shops, as well as on sites such as eBay and Depop; resizing clothes instead of discarding them, courtesy customized alteration outlets such as Oxford Alterations. One of the most sustainable fashion companies in the world Patagonia and its CEO Rose Marcario are already at the forefront of making fashion an ecologically sustainable industry.

In what has to be one of the most controversial and interesting chapters in the book, Mr. Goodall goads his readers to abhor meat and go on a completely vegetarian diet. This is due to the fact that a whopping quarter of the current global emissions are generated from food. Beef and lamb constitute formidable sources of greenhouse gases such as Methane. Paraphrasing carbon footprint expert Mike Berners-Lee, Mr. Goodall informs us that a cow uses 100 calories of food to make just 3 calories of meat. Growing heritage varieties of grains such as the ones being pioneered by John Letts, a seed specialist also aids an abets a low carbon footprint. Moving agricultural production indoors towards ‘hydroponics’ and ‘tray’ farming is also a potential emission reducing endeavor. Companies such as Jones Food Warehouse, 80 Acres etc. are already engaged in this novel method.

In addition to the usual suspect that is Carbon Tax and rewilding measures, Mr. Goodall also highlights a couple of radical and futuristic methods to help us make the transition towards zero emissions. The first such scientific exercise is called cloud whitening. Under, this technique, tiny particles of sea water are sprayed above oceans. This enables a greater portion of the sun’s energy to be reflected back into space. Stephen Salter of the University of Edinburgh is an ardent fan of this method. According to him, a fleet of 300 ships working together would have the impact of winding back temperatures by about 1.5 degrees Celsius. Not just that. 10 cubic meters of tiny drops a second, according to Mr. Salter, ‘could undo all the [global warming] damage we’ve done to the world up until now’.

The second ingenious method referred to as Solar Radiation Management (SRM) involves releasing Sulphur into the stratosphere. This method has an impact similar to cloud whitening, but much further away from the earth’s surface.

However, as Mr. Goodall admits, both the methods come with their innate flaws and the cost factor is not something that will induce eagerness amongst Climate Change proponents.

At the time of this writing, a team of Argentine researches astonished and most importantly alarmed the world by revealing that Antarctica had experienced its hottest day ever, hitting a high of 69.35 degrees Fahrenheit (20.75 degrees Celsius), thereby breaching the previously recorded high of 20 degrees Celsius. If this does not provide monument to the accelerating pace of global change nothing else will. It is high time that we dust ourselves off, stop remaining ostriches with necks buried deep in the sands of condescension and do our own bit towards preventing a global calamity, which might be nearer than what we have smugly assumed to be.

Reading Mr. Goodall’s book might be the first step towards such a move.