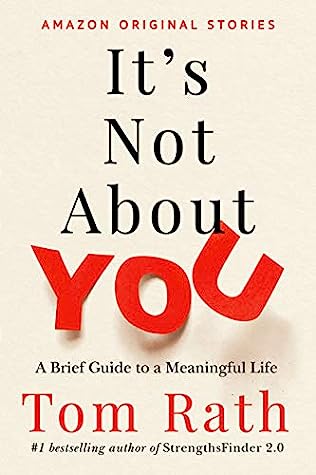 Rajinikanth is one of the most famous silver screen personalities in the annals of Indian cinema. He is also known for his spiritual inclinations and innate altruistic predilections. In a public gathering he once famously quoted that if one was to be aware of the date of his/her shedding the mortal coils, every remaining day until that day of reckoning would be an absolute torture. One person who can relate to this philosophy is one of my all- time favourite authors, Tom Rath. When he was just sixteen years old (or young), Mr. Rath was diagnosed as having a fatal genetic mutation, one that basically shuts off the body’s most powerful tumour suppressor. This was after what was supposed to be a routine eye test. What this meant was that in addition to large tumours that were already growing on his left eye, Mr. Rath was likely to have kidney and pancreatic cancer, and tumours in his spine, brain and adrenal glands. If this list was not daunting enough, Mr. Rath also lost the vision in his left eye, post multiple surgeries.

But at the time of this writing, Mr. Rath has braved the odds and lived to tell his tale. And, what a fascinating tale it has been! A prolific author, Rath has penned many bestsellers that have changed the contours of his reader’s perspectives. In “It’s Not About You”, his shortest book till date, he juxtaposes wisdom with fortitude. Asserting that life is not just about oneself, but about what you do for others, Mr. Rath, conveys to his readers the most fruitful way to lead a contended and enriching life.

Battling the dreaded von Hippel-Lindau condition, Mr. Rath has been an inspiration to millions across the globe. Echoing the late great Randy Pausch on how it takes the realization of mortality to develop an outward focus, Mr. Rath emphasises that life is about what you put back into the world and not what you take out of it.

He illuminates his readers about an empirical research finding which revealed that “kids who battle cancer somehow emerge stronger when compared to peers who have not faced a similar challenge. In particular, when children twelve and older battle cancer and survive, they are more likely to experience what scientists call post-traumatic growth.

Mr. Rath exhorts us to invest in people who matter the most. Relying on a finding by researchers, Mr. Rath informs us that if one is able to have at least five positive exchanges for every negative exchange in a given day, it should carry forward and energise the networks around that person. Such persons, incidentally, are five times as likely to have a very high sense of well-being.

For facilitating positive exchanges, Mr. Rath argues that it is imperative for one to assume the role of both a positive questioner and a keen listener. Both of these qualities are in peril, courtesy, the information age. As Mr. Rath illuminates his readers, in a study titled, “The iPhone Effect”, which was based on an experiment with two hundred participants, and examined the effects of the mere presence of a smartphone on a conversation, the researchers revealed that anytime a smartphone is visible, even if it is not ringing, vibrating, buzzing or even powered on, it degraded the quality of the conversation for everyone. In the cases where the phone was visible, the participants had lower levels of empathetic concern and found the conversations less fulfilling. The people who took their phones out were essentially saying, “This device comes before you and this conversation.”

Inspired by his grandfather, with whom Mr. Rath wrote the bestseller, “Strenghtsfinder”, Mr. Rath recollects the poignant story, where after being diagnosed with a gastroesophageal cancer (advanced stage), his grandfather Don Clifton collaborated with Mr. Rath to finish their bestseller in record time. The book titled “How Full Is Your Bucket?”, was based on the concept that filling in others’ bucket provides more contentment than dipping into another’s. To paraphrase Mr. Rath, “Contribution starts when you see beyond self.”

It may seem preposterous if one was to claim that life’s quintessential philosophies were all packed within the confines of a thirty-five-page book. But then again, it’s quality that matters than quantity. Mr. Rath, in his inimitable style and using an imprimatur that has by now become a trademark, manages to pull this feat off in a brilliant fashion.

To which we shall remain indebted to him.