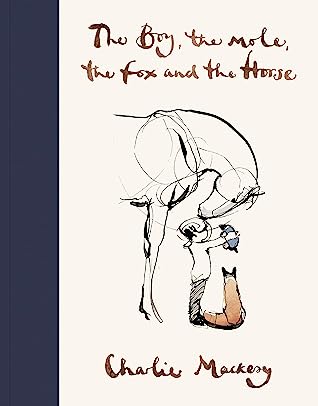 In the year 2018, Charles Mackesy, a cartoonist for the Spectator and a book illustrator for Oxford University Press, updated his Instagram account with a curious drawing. A drawing of a boy and a mole. Mackesy chose the caption, ‘Tales from the underground. Another mole day I think,’ for his picture. Little would Mackesy have imagined the trajectory which this seemingly innocuous picture would take barely a year and more from the date of his uploading it.

At the time of writing this review, the picture-book, “The Boy, the Horse, the Fox and the Mole has sold more than a million copies world-wide. The initial image of the toddler and the little mole was embellished by Mackesy with the addition of a horse and a fox. This intriguing and atypical combination of characters engage in philosophical musings that warm the cockles of every reader’s heart. Extraordinarily simple, yet intricately profound, the dialogue between the four characters dissect the colour and hue of human emotions and pave the way for a serious bout of introspection.

As Mackesy himself exclaims in surprise, “I put that up on Instagram and forgot about it, and the next thing I knew was that hospitals and institutions had been using it, and the army had been using it for PTSD, it went crazy. I wasn’t aware of it. Occasionally I’d get emails saying ‘I hope you don’t mind we used it in our therapy unit, it’s helping people realise it’s a brave thing to show weakness’.”

Mackesy elucidates that the four protagonists, are but different pieces (metaphorically stating), of a single individual. The boy is a fount of curiosity, the mole is always on the look-out for gastronomical delicacies (cakes in particular), the fox is a loner and can hardly be persuaded to engage in any meaningful conversation, and last but not the least is the horse, which is the Socrates and Aristotle of the Group, juxtaposing wisdom with wit.

The picture-book has some arresting captions that sear into the conscience of the reader, making her sit up, draw a deep breath and reflect. For example, when the boy asks the horse what’s the bravest thing the latter has ever said, the horse replies, ‘help’. Digest this.

No wonder this book has taken the world by storm. A raging hit across both sides of the Atlantic, the book continues to encourage and inspire. People are so taken away by the characters that they have begun tattooing the same on their bodies. In a world racked by political turmoil of the nature of Brexit, and ravaged by internecine civil wars triggered by a myriad of causes ranging from religion to power, “The Boy, the Horse, the Fox and the Mole” is a welcome release and a much required respite. Arguing that there is still ample room for kindness to be an uncompromising facet in today’s world gone insane, Mackesy instills a healthy dose of hope and optimism.

The book reaches the apogee of its purpose when the boy responds to the mole when the latter asks, ‘what’s your best discovery?” “That I’m enough as I am.” This spontaneous, fulfilling and meditative understanding that in spite of numerous flaws and innate deficiencies, every human being brings something to the world, that is unique and which is himself/herself, is the quintessential and sacrosanct lesson embedded within the confines of the book.

The stupendous reactions the book has provoked across geographies and the tremendous influence it has generated is best captured by Alice Vincent, writing for the Penguin publications. “People have found The Boy, The Mole, The Fox and The Horse a balm and an uplift”, states Ms. Vincent. Further elaborating her statement, “Lynsey Ritchie was given the book when she was half-way through 15 rounds of chemotherapy treatment for breast cancer. ‘It just touched a nerve,’ she tells me. ‘It was so refreshingly simple, uncomplicated and fresh.”

Every so often, there arrives a book that grabs the reader by the scruff of her neck and proceeds to give her a godawful shake. A shake which even though painful, constitutes an inevitable necessity for the uplift of character, inducing of empathy and instilling courage. A shake that brings to the shaken, the very perception of verisimilitude and the ultimate realization that there is attached to every life, a genuine and noble purpose.

Dear reader, I leave you with this line from Mackesy to reflect, react and reminisce:

‘Tears fall for a reason and they are your strength, not weakness.’

5 thoughts on “The Boy, The Horse, The Fox, and The Mole – Charles Mackesy”