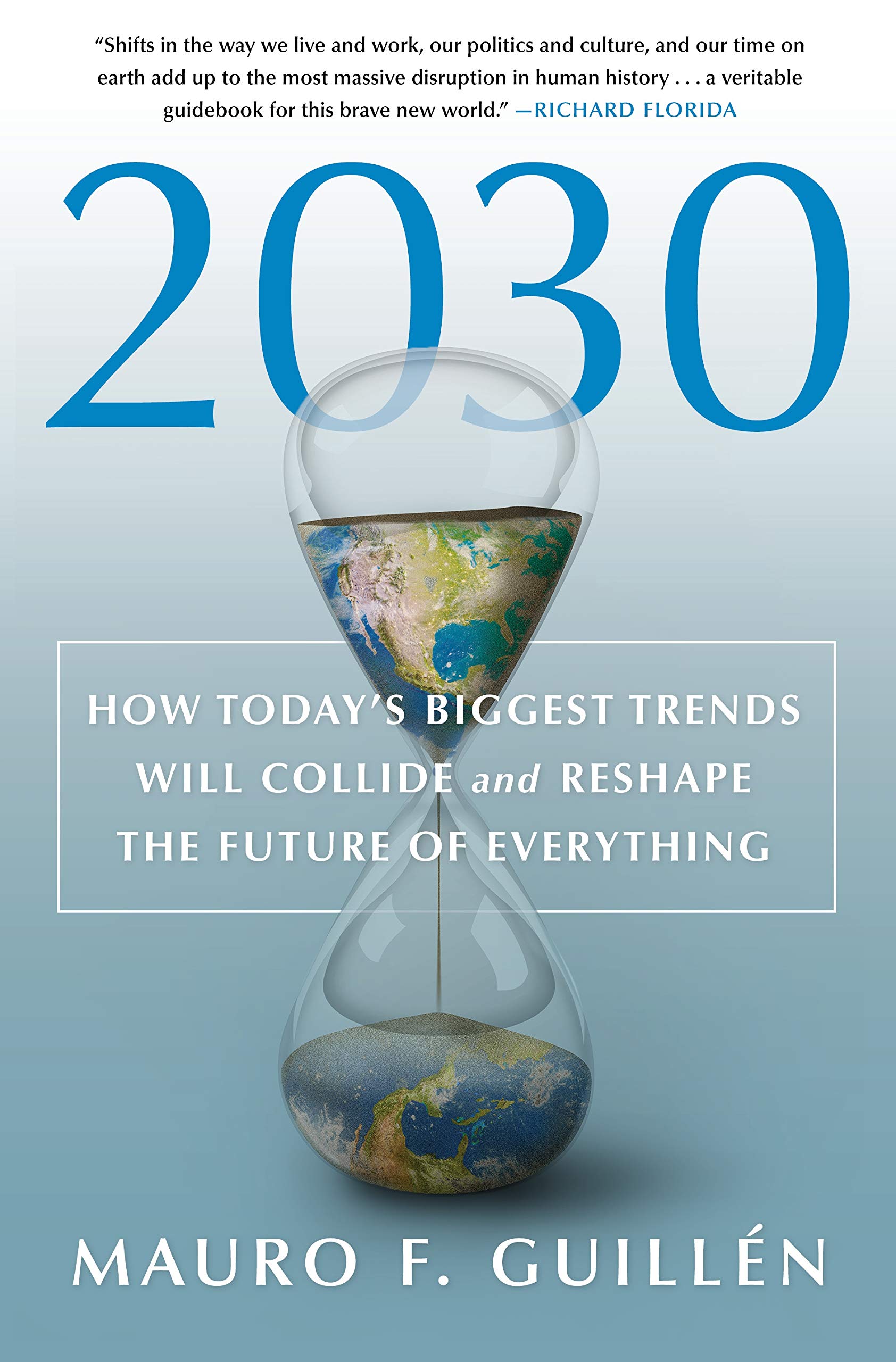 Would Lehman Brothers have had a more encouraging prospect if it was Lehmann Sisters instead? What is the connection between block-chain technology and a national election? In his book “2030” (one of the shortest ever main titles for a book succeeded by what has to be one of the longest subtitles ever for any literary work), Mauro F. Guillen, Zandman Professor of International Management, Wharton School and Director, Lauder Institute, tackles these questions along with a whole horde of seemingly unconnected but intricately linked phenomena as he proceeds to dissect some of the most disruptive trends that the world would be a spectator to by the year 2030.

The book mulls about the tectonic trends, that by the year 2030 would put paid to the conventional, and upend received wisdom. For example, as the author highlights, the most powerful middle class both in terms of sheer population and purchasing power by the year 2030 would be in India and China. In a humorous take on Arthur R. “Pop” Momand’s memorable conception of “Keeping up with the Joneses”, Mr. Guillen mulls that in future, it would be a case of “Keeping Up With the Singhs and Wangs.” This is also in line with the funnel of innovation that seems to have sprouted in the two most populous nations on Earth. “…while in 2016, the number of patent applications filed in the United States was three times greater than in 1995, in India it was seven times greater, and in China, a whopping seventy-two times greater.”

If you are a woman and you are reading this, drop whatever it is that may be doing, do a cartwheel, or two, and whoop out in undisguised glee. For according to Mr. Guillen, women will get rich – and most importantly richer than men – by the year 2030. This trend, the author argues is in keeping with the famous, or rather infamous (depending upon how one interprets the findings), “Harvard-Yale Study” that “resonated with educated women who were trying to balance their professional goals with personal life.” From a risk aversion perspective, women tend to spend more on their own physical and mental well being and are more inclined to ensure that their parents, off-spring and grandchildren get the healthcare that is essential. The author after quoting Gloria Steinem “we can tell our values by looking at our checkbook stubs”, argues that, “its not much of a stretch to argue that if instead of Lehman Brothers we had Lehman Sisters, the crisis of 2008 might have been averted.”

Whilst holding forth on futuristic trends, one cannot afford to either neglect or ignore the existential threat of Global Warming, and neither does Mr. Guillen. Cities, according to him have become teeming masses of humanity and unless drastic and conscientious measures are instituted, these megapolises face imminent peril. “Cities occupy 1 percent of the world’s land yet are home to about 55 percent of the human population. Told another way, the total land mass on Earth is 196.9 million square miles and cities account for roughly 2 million of those. With 4 billion urban residents, that’s an average of 2,000 people per square mile in cities, which is quite a crowd. Cities account for 75 percent of total energy consumption and 80 percent of total carbon emissions.” Sobering statistic and a time for introspection in so far as humanity, that is more tightly packed than a cliched can of sardines, is concerned.

An added melancholic aspect attached to the new age city, according to the author is its dehumanization. Mr. Guillen proclaims that our cities have lost their soul and are beginning to alienate themselves. Characterised by stereotypical architecture and grotesquely towering monuments, that bear shameless testimony – in addition to paying brazen obeisance – to capitalism, one cannot but agree with Mr. Guillen. Drawing his reader’s attention to the twentieth century Italian metaphysical painter Giorgio de Chirico, Mr. Guillen mulls about the bleak paintings of the acclaimed artist. He also quotes the poet Federico Garcia Lorca, who in 1929 after a stay in New York said, “there is nothing more poetic and terrible than the skyscrapers’ battle with the heavens that cover them.”

Mr. Guillen also offers a kind of liberation and escape from the vice like grip of a city life. Drawing on the principle of “mundanity of excellence” – a term coined by the sociologist Daniel Chambliss, Mr. Guillen educates his readers that high performance is not a natural outcome or corollary of quantum leaps or innate talent, but, a product of a series of tiny and incremental improvements.

Mr. Guillen also jumps on the bandwagon of vertical farming and its perceivable benefits (if this statement comes across as an exercise in complaining, then I ask the author to pardon me.). This proposition of Dickson Despommier of Columbia University has fast gained traction, and companies such as Sky Greens, Green Collar Foods and Artesian Farms have made a veritable enterprise out of the novel concept.

But one of the most important trends identified by Mr. Guillen in “2030” appears in a chapter titled “Imagine No Possessions.” An obvious take on John Lennon and Yoko Ono’s immortal melody, this chapter deals about the inescapable rise of the gig economy. The likes of Uber and Airbnb have demonstrated with a chilling precision that the best way to enjoy possession is by not possessing the product or the service or the experience that triggers such enjoyment! As Mr. Guillen illustrates, “in 2014 Facebook paid $19 billion to purchase WhatsApp, a messaging app with virtually no physical assets to speak of and fewer than sixty employees.” Airbnb, in addition to providing hassle free accommodation to the egregious back packer also bestows upon the owner a spectacular financial benefit. A senior citizen who owns a house can now earn a steady income by letting out a part of his property without being beholden to a bank, which otherwise would have been the unfortunate case in the event loans were obtained with the house as an inevitable collateral.

However, the gig economy brings along with it, a set of unfortunate inconveniences. Crowded cities, and traffic congestion may result in a tragedy of commons, a concept pioneered by the sociologist Garrett Hardin, in 1968, and first observed by the nineteenth century British economist William Forster Lloyd, who penned the environmental hazards that might accrue as a result of grazing on unregulated lands.

Mr. Guillen rounds off his book with a Chapter on Bitcoins and Cryptocurrencies. The burgeoning rise of cryptocurrencies has ensured that there are more currencies on Earth than countries. What makes cryptocurrencies very alluring is their perceivable safety. “Consider that the odds of guessing a winning Powerball lottery number is 1 in 292 million. The probability of hacking a bitcoin private key, which uses 256-bit encryption, is a minuscule 1 in 2 to the power of 256, or 1 in over 115 quattuorvigintillion – a number with 78 digits. That’s equivalent to the odds of winning Powerball nine times in a row.”

Estonia seems to have grasped this concept perfectly well. Presenting itself to the world as “e-Estonia”, the country is a Digital Republic. The citizens, as the author points out can apply for benefits, source medical prescriptions, register their businesses, vote and even access nearly three thousand other digital services online. The author opines that from facilitating elections to funding development, blockchain technology may be the way forward.

As we are trying to tortuously untangle ourselves from the grip of an insidious pandemic, words like the “new Normal”, “social distancing etc.” are rewriting our everyday Lexicon and rewiring our attitudes and outlook. These unprecedented times are the ones where re-imagination, reinvention and repackaging would save the day for mankind. Yet more trends, perhaps for Mr. Guillen to seriously start mulling about a sequel!

(2030 How Today’s Biggest Trends will collide and reshape the future of everything by Mauro F. Guillen, a St Martin’s Press Publication published on the 25th of August 2020).