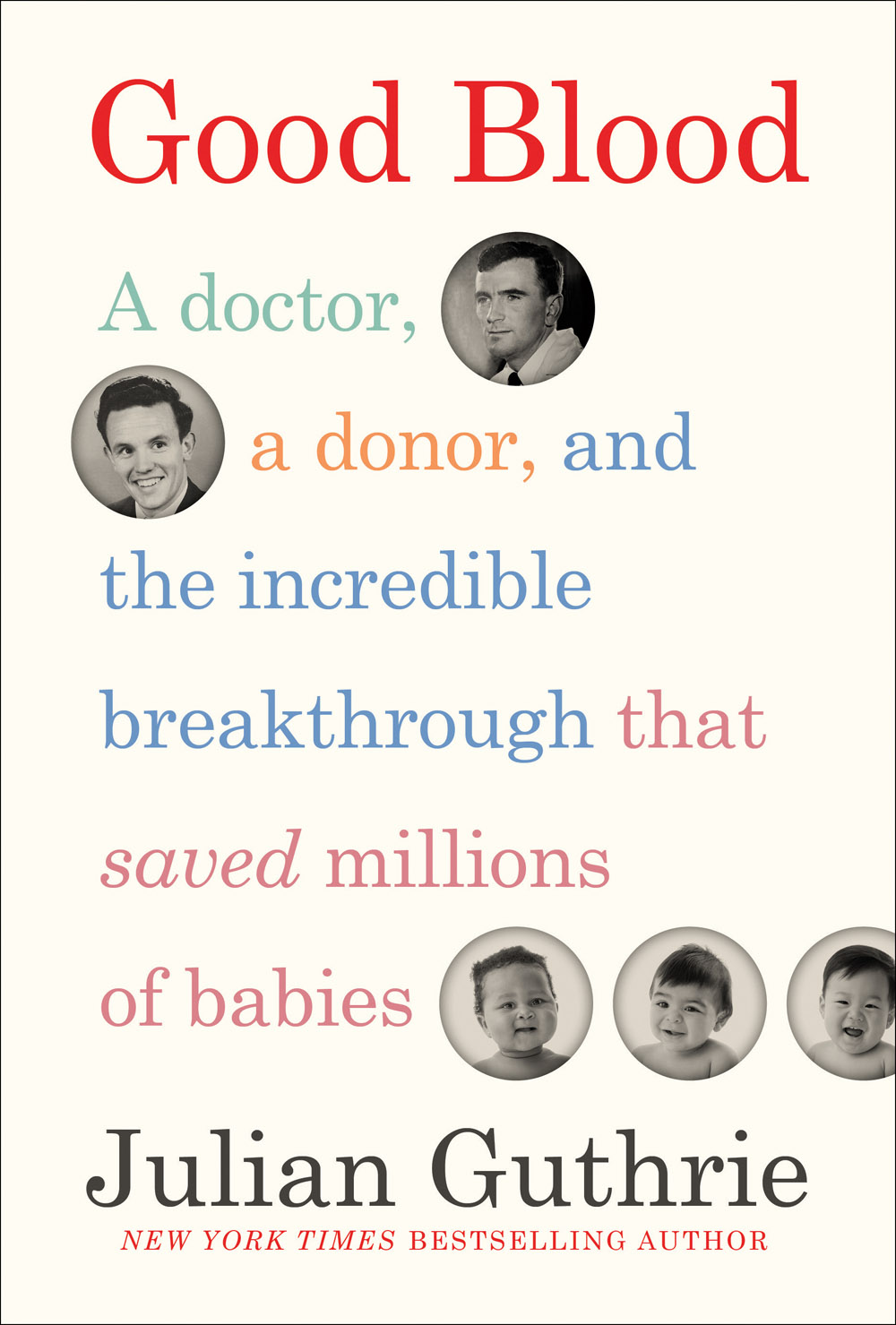 James Christopher Harrison, an effervescent Aussie lad was all of fourteen years old, when a seemingly innocuous bug that caught him turned into a bad case of triple pneumonia. With the antibiotics failing to do their job, young Harrison’s condition worsened before it was decided that a pediatric pulmonary lobectomy, a complicated surgical procedure to excise the diseased portion of the lungs, had to be performed upon him. Three necrotic lung lobes, thirteen units of blood, and eleven hours of surgery later, young Harrison is finally wheeled out of the Operating Theatre. Surgeon Harry Windsor had miraculously brought Harrison back from the very brink. As the boy is recovering his devout father reminds him that the latter was saved by the “blood of strangers.” James Harrison promises his father, a donor himself, and his family that he would “return the favour.”

Dr. John G.Gorman booked himself a berth on the Queen Mary seeking to carve out a name for himself by sailing to the United States of America from his motherland, Australia. Armed with an insatiable curiosity and the book “Ideas Have Consequences” gifted by his father, Gorman was willing to risk it all in the search of achievement and professional success.

Julian Guthrie’s latest book, “Good Blood”, brings together the promise of James Harrison and the pedigree of Dr. John Gorman in a manner that will leave the reader poleaxed. An American journalist, and an acclaimed author, Ms. Guthrie has been nominated for the Pulitzer multiple number of times, and it is not at all hard to fathom why. In “Good Blood” which may be her best work yet, Ms. Guthrie’s writing is invested with passion and informed by a purpose. The unlikely, yet stupendous inter-linkage between the selfless contribution of a donor and the indefatigable pursuit of a doctor in combating the ravages of a peculiar disease targeting babies, puts even the raciest edge of the seat fiction thriller to utter disdain.

Dr. John Gorman after bagging himself a position at the Columbia Presbyterian Hospitalin Manhattan becomes obsessed with the workings of the insidious Rh Disease. In this disease, a baby inheriting Rh positive blood from the father, with the mother’s blood being Rh negative, gets its red cells destroyed by the mother’s own antibodies, made by the immune system to fight things it didn’t want in the body. This ultimately results in the baby developing anemia, and the mother having a miscarriage. Dr. Gorman finds an able perpetrator-in-crime in trying to decipher the intricacies of Rh disease in the form of Dr. Vince Freda. This eager beaver of a man and a former air force surgeon had the privilege of having studied for a year under Alexander Wiener, who in turn was a protégé of Karl Landsteiner, popularly known as “the Father of Blood Science.”

As doctors Gorman and Freda spend their every waking hour mulling about the Rh disease, unbeknownst to them, a continent away, James Harrison gets busy honouring the promise given by him to his father. Beginning to donate blood from the legally eligible age of eighteen, he goes about this task with a dedication bordering on the maniacal. As Ms. Guthrie informs her readers, “he went to donor mobiles – large converted school buses first called into use in Australia in 1942 – whenever they rolled into town, meeting different nurses and doctors with each visit. But when he got a promotion working in the accounting and clerical department at the railway and was relocated to Sydney, he found a home of sorts in the Red Cross blood bank at 1 York Street.” But James was met with a unique conundrum. His blood could be used only for research and not for transfusion. This was because of the presence of unusually high level of antibodies in his blood that when, transfused might create complications for the donee.

Meanwhile, Dr. Gorman gets his moment of epiphany courtesy a textbook given as a complementary copy by a traveling salesman from W.B. Saunders Company. Titled “General Pathology” and penned by Australian Nobel laureate Sir Howard Florey, the book is based on a series of lectures delivered in the school of pathology at Oxford. As Ms. Guthrie, writing in an effortlessly jaw dropping fashion informs her readers, “he {Gorman] flipped back to the table of contents and then forward to Chapter 34, page 697. The Chapter was titled, “Biological Factors in the Production of Antibodies.”……He continued reading until one sentence gave him pause: the presence of circulating antibody, whether produced actively or received passively, depresses and may completely inhibit the human response to the relevant antigen, although not to other antigens.” An excited Gorman tears off in search of Freda. The cure for Rh disease might be on the horizon!

Gorman and Freda embark on a fascinating trial recruiting convicts at the notorious Sing Sing prison facility. Their whole trial is based on the logic that when a mother is given passive antibodies thereby inhibiting her from producing her own antibodies, her immune system gets fooled into thinking that it has already responded to the Rh antigen. After a laborious wait and a daring, albeit potentially dangerous exercise of using Gorman’ sister-in-law Kath as an experimental candidate to test the passive antibodies with, Gorman and Freda’s efforts finally bear fruit and the United States Government officially grants approval to the RhoGAM shot. RhoGAM is an injection made up of antibodies called immunoglobulin that help protect a fetus from its mother’s antibodies.

This is where the book becomes most interesting and puts an end to the possibility of finishing it with a pair of dry eyes. Women who have already lost their babies to the dreaded Rh disease and people such as Harrison, whose plasma composition is unique thereby making it an ideal form of donation, are identified as potential donors of blood. The blood thus donated by these individuals, can then be used to save babies of mothers who are Rh negative. As Ms. Guthrie illustrates, oblivious to their own and irreparable loss, women flock in drones to blood collection centres to donate their blood so that mothers-to-be are spared a similar fate. In contrast to blood, blood plasma, can be donated as often as once every two weeks. Ms. Olive Semmler, who had one live child out of eight pregnancies, donated blood a stupendous five hundred odd times. “One woman who became a donor had lost ten babies to Rh disease. To get to the Sydney blood bank, she started her day by rowing up a river, walking a mile to the bus, then taking a train to the central station.”

But the most ebullient of all donors was James Harrison. Now that his blood could be used not just for research but also for actual transfusions, he made a staggering 1,173 donations throughout his lifetime. His last donation was when he was eighty-one years of age and eighty-one was the cut off age for donating blood in Australia. Harrison’s donations are estimated to have saved over 2.4 million unborn babies from Rh disease. Affectionately known throughout Australia as the “Man With The Golden Arm”, a perfect moniker for a cricket obsessed nation, Harrison was awarded the Medal of the Order Of Australia on the 7th of June 1999.

Gorman and Freda, went on to win the prestigious Lasker-DeBakey Clinical Medical Research Award in 1980 along with Cyril A. Clarke, Ronald Finn, and William Pollack for “pioneering work on the rhesus blood group system, the role of rhesus D antibodies in the causation of Rh disease and the prevention of Rh disease.”

The most poignant moment in the book, predictably, is reserved for the last blood donation of James Harrison. Surrounded by a bank of television cameras and grateful mothers with babies whom James had helped save with his donations, Harrison donates his blood under the watchful and benevolent supervision of nurses Lizzie Thynne and Robyn Barlow. ‘James thinks his donations are the same as anybody else,’ a director of the blood center said, standing next to James. “But he’s a national hero.” James demurred, saying, ‘no, no, no. it’s just something I can do. Its one of my talents. Probably my only talent.”

At the time of this writing facing unprecedented times. The wrath of a pandemic called COVID-19 has engulfed us in its wake and set us back not just economically, but more dangerously, morally as well. We seem to be helpless in not just countering the rapid spread of this disease but are also rendered incapable of nurturing a universal bonding in this period of crisis. Riven by racial tension and divided by a chasm of hatred, mankind seems to be at a crossroad. There is a deepening erosion of faith and a severe loss of hope. The crying need of the hour is for an epiphanic John Gorman to take the SARS-COVID 2 virus head on and an effervescent James Harrison to restore the faith in humanity. Hope we manage to get them booth sooner rather than later.

Meanwhile we can all once again be immensely grateful to Ms. Julian Guthrie for her marvelous efforts in bringing to worldwide notice, one of Earth’s greatest collective altruistic endeavour.

(Good Blood: A Doctor, donor and the incredible breakthrough that saved millions of babies by Julian Guthrie is published by Abrams Press and will be released on the 8th of September 2020.)

3 thoughts on “Good Blood: A Doctor, donor and the incredible breakthrough that saved millions of babies – Julian Guthrie”