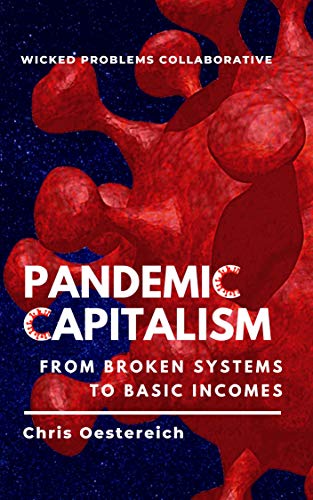 The Corona virus pandemic that is currently busy wreaking havoc across the globe, while causing massive dangers to the health of the global populace has also set back the world economy as mankind tries to come to grips with this highly infectious disease. The people most impacted by this virus represent the lowest and deprived strata in society. The homeless, the ailing who cannot afford healthcare, the downtrodden and the neglected. With many countries imposing a ‘lock down’, a multitude of sectors have shuttered down businesses and left their employees in the lurch. Even the ‘essential’ services sector such as healthcare and retail are not ensuring that the monetary benefits being made available to its workers are equivalent to, if not deservedly greater than, the risks borne by them.

Chris Oestereich founded the Wicked Problems Collaborative, and also engages in fundraising for his seed-stage social enterprise, Full Circle Filament, which will work directly with informal waste collectors to make 3D printing filament and other socially valuable products. He is also a co-founder of the Circular Design Lab, an open innovation platform that focuses on prototyping and delivering solutions to the sorts of challenges he writes about. In his new and engaging book, “Pandemic Capitalism”, Mr. Oestereich joins the clamour for ushering in a scheme of Universal Basic Income (UBI) so that people of all strata irrespective of caste, colour, creed, sex, religion and other extraneous factors, can lead a life of dignity, self esteem and self sustenance. Cocking a snook at Adam Smith‘s “Invisible Hand“, Mr. Oestereich draws our attention to three potential states along a continuum for the economy: “an entirely non-competitive society, need-based competition, and want-based competition.” The first state was what was vehemently advocated by the Communists. “In theory, all are equals. Gains are shared. This approach is believed by adherents of capitalism to reduce the incentive for people to work hard and increase the size of the economic pie.”

Second in the continuum is “want-based competition.” This is what characterises the rat race economy of today. As the author informs us, “people are forced to compete for necessities. Food, water, and shelter are not human rights, but rather things to be ‘earned.’ Surviving, and thriving, are ‘spoils’ of the arena. Homelessness and hunger are among the costs of losing—risks of the game. We cull ‘the weak’ while the ‘strong’ thrive. The cost of the game is a society that becomes increasingly mean.”

Separating non-competitive society from the want based competitive economy is the need-based competition. In this scenario we would look after each other’s backs and we would be satisfied with all our genuine needs thereby letting go of the pernicious attribute of greed. “Think of it as a cake made of socialism with a layer of capitalist icing. Everyone gets what they need without the complete avoidance of greed. We would just keep the rapacious ones a safe distance from our necessities.”

According to Jason Hickel, an anthropologist at the London School of Economics and a Fellow of the Royal Society of Arts, global inequality, has attained damaging and dangerous proportions. In a fascinating piece titled, “How Bad is Global Inequality, Really?” and published on his website, Mr. Hickel observes that, “the poorest 60% – the ones depicted as the “winners” in the elephant graph – continue to live under the poverty line of $7.40 per day (2011 Purchasing Power Parity).” The elephant graph here refers to a famous and popular graph, originally developed by Branko Milanovic and Christoph Lakner using World Bank data. This graph charts the change in income that the world’s population have experienced over time, from the very poorest to the richest 1%. Mr. Hickel’s findings paint an extremely somber picture. In his own words, “…the top incomes… well, they have grown by what can only be described as an obscene amount, with millionaires doubling or tripling their annual incomes, gaining some 14,000 times more than the average person in the poorest 60% of the world’s population”.

The proponents of and for UBI are slowly, but steadily making their arguments known and felt in all the relevant places such as Corporate Boardrooms, Parliaments and the portals of renowned and progressive think-tanks. The Economic Security Project, a new UBI think-tank, deliberates thus: “In a time of immense wealth, no one should live in poverty, nor should the middle class be consigned to a future of permanent stagnation or anxiety.” Michael Faye, the co-founder of the intrepid GiveDirectly that is piloting its UBI in Kenya states, “We could end extreme poverty right now, if we wanted to.” Philippe Van Parjis and Yannick Vanderborght make an arresting case for the implementation of UBI in their best-seller, “Basic Income: A Radical Proposal for a Free Society and a Sane Economy” Adding to an already burgeoning number are stellar thinkers such as Nick Srnicek and Alex Williams, the authors of “Inventing the Future”, Rutger Bregman, and Guy Standing, a long standing member of BIEN, the Basic Income Earth Network, a primary body advocating for UBI.

Mr. Oestereich joins the UBI bandwagon and his reasons really merit more than a mere perusal.

I received an advance review copy for free from BookSirens.com, and I am leaving this review voluntarily.