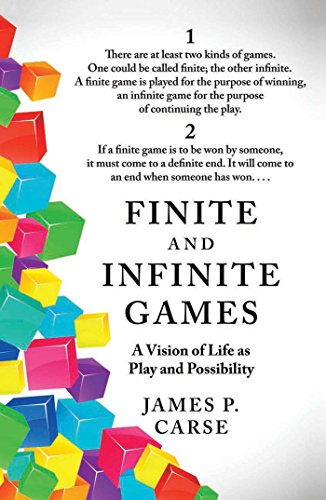 The world-famous Sociologist and Economist Thorstein Veblen coined the term “invidious” consumption to refer to the ostentatious consumption of goods that is meant to provoke the envy of other people. James Carse’s incredibly abstract and extraordinarily complex book “Finite and Infinite Games” falls squarely within the ambit of such consumption. I am willing to bet that this book would have adorned many a bookshelf with the owner having read nary a chapter or having valiantly accomplishing the feat of trudging through the book, left scratching her head or even tearing her hair out. To the latter accomplishment may be added yet another human being!

Atheist and Professor Emeritus of history and literature of religion at New York University, Mr. Carse begins his book with these innocuous lines, “There are at least two kinds of games. Once could be finite, the other infinite. A finite game is played for the purpose of winning, an infinite game for the purpose of continuing the play.” So far so good. The Professor expounds on the necessity and prevalence of spatial boundaries, numerical constraints and the approbation of a consenting audience as some of the vital pre-requisites for effecting a finite play. To have such boundaries means that the date, place, and membership of each finite game are externally defined. When we say of a particular contest that it began on September 1, 1939, we are speaking from the perspective of world time; that is, from the perspective of what happened before the beginning of the conflict and what would happen after its conclusion. So also, with place and membership. A game is played in that place, with those persons. The world is elaborately marked by boundaries of contest, its people finely classified as to their eligibilities.”

But an infinite game is neither invested by the rules that bind its finite counterpart, nor is hemmed in by the constraints of time or space. The protagonists in an infinite play are rendered by an inability to even identify the commencement of the game, and they do not care a fig either! There is no label of eligibility or qualification attached to a player participating in the infinite game, and the sole objective of an infinite play is to keep playing, in perpetuity. Unlike in a finite game, where the opposing factions are always on the lookout for executing a terminal move that would kill the game, infinite games are antithetical to terminal moves since they are self-perpetuating in nature with no end. Thus, while finite players play within boundaries, infinite players play with boundaries.

However, things begin to take a metaphysically challenging turn when Mr. Carse begins his analysis on relationships between seemingly incongruous and unrelated objects such as Machines and Gardens. Yes, you read that right. Machines according to Mr. Carse are the epitome of predictability. Gardens however are not shackled by the phenomenon of cause-and-effect but are synonyms of growth and spontaneity. ”The question is not one of restricting machines from the garden but asking whether a machine serves the interest of the garden, or the garden the interest of the machine.” While a machine is driven by external force, a garden is grown by an energy within itself. A garden is not something we have over which we stand as gods. It’s a poiesis, a receptivity to variety, a vision of differences that leads always to a making of differences. The poet joyously suffers the unlike, reduces nothing, explains nothing, possesses nothing.

Similarly, Mr. Carse also makes a distinction between a society and culture. The narrow concept of a society in informed by the dictates of territorial limits, whereas a culture is defined only by its horizon. While a boundary constitutes a phenomenon of opposition, a horizon in sharp contrast represents a phenomenon of vision. In a Chapter titled “I Am the Genius of Myself”, Mr. Carse quotes Hamlet, “I am the genius of myself, the poietes who composes the sentences I speak and the actions I take. It is I, not the mind, that thinks. It is I, not the will, that acts. It is I, not the nervous system, that feels.” But in the same way a dog taught to shake hands does not shake your hand, or a robot programmed to say words, does not say them to you, Hamlet was not reading when he said he was reading words. This cryptic word play induces a spontaneous spell of explainable giddiness into the reader.

Here’s Mr. Carse explaining the difference between art and artist: “Art has no scripted roles for its performers. It is precisely because it has none that it is art. Artistry can be found anywhere; indeed, it can only be found anywhere. One must be surprised by it. It cannot be looked for. We do not watch artists to see what they do, but watch what persons do and discover the artistry in it. Artists cannot be trained. One does not become an artist by acquiring certain skills or techniques, though one can use any number of skills and techniques in artistic activity. The creative is found in anyone who is prepared for surprise. Such a person cannot go to school to be an artist but can only go to school as an artist.”

Mr. Carse also elucidates on what he terms represents a “theatricalization of society.” “The more effective policy for a society is to find ways of persuading its thieves to abandon their role as competitors for property for the sake of becoming audience to the theater of wealth. It is for this reason that societies fall back on the skill of those poietai who can theatricalize the property relations, and indeed, all the inner structures of each society. Societal theorists of any subtlety whatever know that such theatricalization must be taken with great seriousness.”

There is yet another Chapter that dwells with jaw dropping intricacy on the subject of human sexuality. I won’t take a stab at even a rudimentary explanation of the same since the entire Chapter left me looking and feeling like an intellectual pygmy!

The best-selling author Simon Sinek confesses that he derived his inspiration for the best seller “Infinite Games” from a reading of Mr. Carse’s work. I intend to read the book next, and the very prospect has induced a daunting element of trepidation in me.