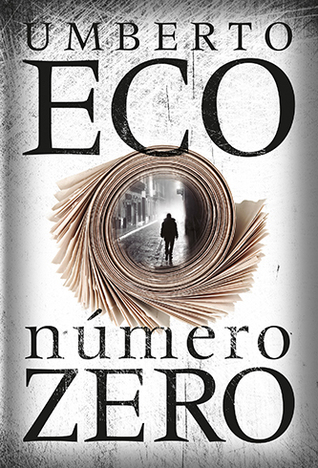 “Numero Zero” by the late Umberto Eco is a thriller rendered willingly readable on account of a plethora of plots and sub-plots.

The one time Italian dictator and a sworn ally of Adolf Hitler, Benito Mussolini a.k.a The Duce along with his mistress, Clara Petacci was captured trying to flee a lost cause, by the Political Commissar of the partisans’ 52nd Garibaldi Brigade, Urbano Lazzaro, on 27 April 1945, near the village of Dongo (Lake Como). The very next day, both Mussolini and Petacci were summarily shot. The shootings took place in the small village of Giulino di Mezzegra and were conducted by a partisan leader who used the nom de guerre of Colonnello Valerio.

The facts as stated above are those that are universally accepted, acknowledged and to a great extent, forgotten. But what if by a bizarre twist of fate, The Duce had a body double and as an act of ultimate sacrifice, it was the body double who gave up his life instead of the original leader? What if Benito Mussolini actually escaped to Argentina and sought refuge within the bowels of Buenos Aires waiting for an opportune moment to arrive, before he could spring a malevolent surprise on Italy yet again?

A disillusioned and dispirited author desperate to make ends meet, and who ends up working for an editor running a ‘dummy’ newspaper, comes into the know of some very uncomfortable facts relating to Mussolini and his possible escape conspiracy. He dismisses it as a fabric of improbable fiction before the acquaintance responsible for postulating this theory is found in a dark alleyway with a fatal knife wound in his back. Things heat up as the conspiracy theory gains substance and stature.

“Numero Zero” is a one sitting read and a just tribute to the story telling talents of a master author and a superb innovator.