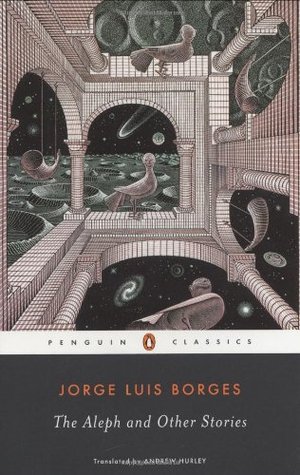 Jorge Luis Borges takes the oeuvre of fiction to an ethereal plane, a plane where fantasy ceases to be the tug and pull of human imagination and concocted tales breathe more conviction and credibility than recorded reality. Along with ‘The ‘Ficciones’, ‘The Aleph’, represents one of the most enduring collection of stories penned by this Argentinian literary genius. Ranging from the mellow to the macabre, each of these tales regale, rivet and reverberate under the dexterous influence of their creator.

‘The Dead Man’ hold forth on the untrammeled ambitions of a strapping young lad, who nurses a burning ambition of being the unquestioned and celebrated leader of a famous smuggling racket. The story unfolds at a dizzying pace and hurtles towards its tragic end, which on hindsight is the only befitting conclusion that merits the designs of the protagonist. “The Aleph” is a spellbinding tale of intrigue and perceived delusions, where an old man is desperate to hang on to a run down house, the landlords of which are equally hell bent upon destroying it. “Ibn-Hakam al-Bokhari, Murdered in his Labyrinth” would be a contender to give any detective story of repute a honest run for its money. This short story of deceit and revenge boasts of peculiar twists and pernicious turns involving a brave king and his cowardly but cunning Vizier. Add a slave and a lion to the mix, and you have a melting pot of visceral emotions, vertiginous plots and a vengeful conclusion.

The range covered by Jorge Luis Borges in this book leaves one reeling with admiration and astonishment. The perpetual motion machine that is the mind of Borges, weaves in and ducks out between Soul and Savagery; Barbarism and Benevolence; Introspection and Idiosyncrasy; darkness and realisation. Gods rule and rue, mere mortals ravage and repent; miracles proliferate and perish. This enchanting collection in the readers’ mind like an obstinate leech or a drop of the most powerful glue. There is no way that anyone who has devoured “The Aleph and Other Stories” will ever be able to eviscerate the same from her memory.

This collection symbolises the Latin Phrase “bis dat qui cito dat” (“he gives twice, who gives promptly -a gift given without hesitation is as good as two gifts”). Borges favours the world of literature with a precious gift given without the slightest jot of hesitation or reluctance. A gift that is ephemeral yet eternal, possessed easily yet most rare; and revealing yet hiding the most intricate of secrets.

We should be all perennially grateful to Jorge Luis Borges for such an extraordinary gift!