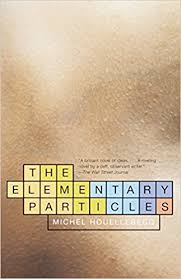 Michel Dzerjinski is a highly acclaimed molecular biologist with impeccable credentials. His personal life however is a prosaic void bereft of love, empathy and relationships. Cocooning himself into a world of Double Helices, chromosomes and Hilbert spaces, Michel leads an existence that is both spartan and dreary. Microwave dinners, research entries and teaching aspiring students represent the whole of Michel’s life. Bruno, the half brother of Michel (both the lads having been abandoned by their libertine mother, Janine in favour of a Bohemian commune), is the polar opposite of Michel. After having been mercilessly bullied and tortured by wayward seniors in boarding school, Bruno develops a hedonistic attitude towards life. Astringent and unhinged sex, a lingering feeling of inadequacy and insecurity and succour in bottles of wine and brothel houses constitute the way of life for Bruno.

However both the brothers sunk in their own seemingly irredeemable ways of life get one final opportunity to mend their ways and put their lives back in order. Will the two brothers undergo a transformation? Or will they choose to neglect the fortuitous chance and continue wallowing in their self imposed misery?

Houellebecq dazzles in this work which makes it an instant classic. There are unmistakable shades of the despondence and pessimism of Aldous Huxley which lends a veneer of introspection to the book. Houellebecq’s writing is unhinged and without any element of inhibition or shame. The sexual escapades that are the obsession of Bruno are narrated in a stupendously explicit manner that makes the reader bristle. But then again the sequences are so contextual that they seamlessly blend with the situation in which the actors are placed, lending a bizarre sense of inevitability to what otherwise would be construed to be embarrassing episodes. If Houellebecq has been compared to the great Albert Camus by many who have been influenced by his writing, they cannot be blamed for nursing such an opinion. Here is a modern day great who uses the medium of writing to illuminate his readers about the social, cultural, metaphysical and ideological problems that are plaguing the world today. Michel and Bruno can be any one of us, lost in a meaningless vortex of existence, struggling to justify the paths that we take, oblivious to the sinking reality that clasps us in its vice like grip. We are too ashamed to acknowledge our imperfections; too egoistic to admit our superficial victories in the midst of a devastating sense of defeat. We go through constant crises of confidence yet pretending to be in complete control of our lives. It is this false sense of security and pretentiousness which Houellebecq attempts to puncture and bring us back to reality and most importantly, guides us towards repossessing our sanity.

“Elementary Particles” is a modern day classic. It is a work which firmly established Michel Houellebecq as one of the most erudite and astute novelists in the writing world today. It is also a book which instructs us to leave behind our sense of shame when putting our thoughts into words and sentences. Once the great Jack Kerouac remarked, “One day I will find the right words, and they will be simple.” Like Kerouac, Michel Houellebecq seems to find the right words every single time he sits to write, and those words are phenomenally and enduringly simple!