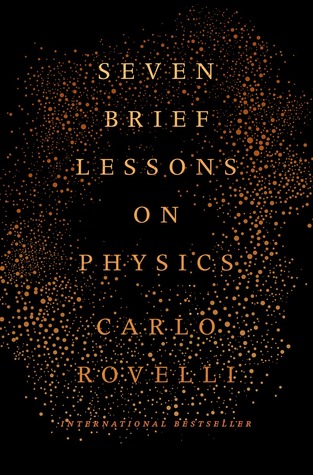 It is next to impossible to confine within all of 78 pages, some of the seminal and breakthrough concepts in Physics. For example, how does one reconcile the alluring tug of Einstein’s Theory of Relativity with the seemingly contradictory push of Feynman’s Quantum Mechanics? Does it even make sense to fit Clerk & Maxwell’s Electromagnetism and Stephen Hawking’s celebrated voids that are Black holes within a book that is even smaller in size than a recommended Physics Text Book for a high school student?

Apparently it is possible to accomplish the above – and more. This is precisely what Carlo Rovelli does as well. Employing brilliant clarity and common sense, Rovelli provides a basic introduction to six developments in the domain of Physics that have changed the manner in which we think and the prism using which we view the world. This is a book which is for the novice and the expert alike. Without carelessly venturing into the realms of incomprehensible jargon, the author lays bare the concepts of Relativity, Particle Physics, composition of atoms and the spectacular role played by time, space and matter in the cosmic interplay that has led to the evolution of a plethora of galaxies containing billions and billions of stars and planets.

We have come a long way since Giordano Bruno was burnt at the stake for predicting (with absolute precision and truth) that the Sun was at the centre of the Universe and not the Earth. It took Copernicus and his Heliocentric Theory to displace the ‘sacred’ Geocentric Theory. Hence the heretical has displaced the sacrosanct – and rightfully! . But in spite of or rather despite all our celebrated scientific advancements, the unknown today still trumps the known. Mankind might have discovered “God’s Particle” in the form of the Higgs Boson at the Large Hadron Collider at CERN, but God’s mysterious workings (assuming the existence of Divinity and his contrivances) are yet to be fully comprehended and deciphered. Although such a task will not be accomplished in our lifetime, seeds have already been sown by pioneers and visionaries for the future generations to embellish and enhance the knowledge gathered by us today.

Carlo Rovelli is undoubtedly one such pioneer. Reading this book will certainly assure the young and the vibrant that their choice to take up the discipline of Physics was the best one. Meanwhile the old can gleefully contemplate on what has been and what will be!