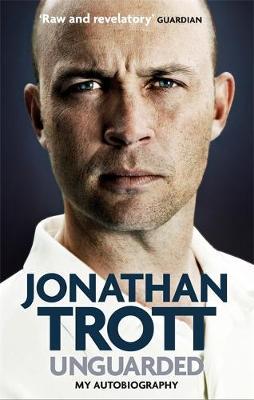 While some autobiographies constitute an exercise in monotonous trumpeting of the self, there are some that traverse the path of introspection. However rare are the ones that lend a clear perspective regarding life itself. Jonathan Trott and George Dobell have successfully written a book, which, although primarily revolves around the game of cricket, transcends the sporting arena, to touch a raw and uncompromising nerve. The confluence of sport and mental pressure is a subject that has unfortunately and undeservedly not received the coverage and visibility that it deserves. The assiduousness of Marcus Trescothik’s moving autobiography being an outstanding exception. Trott and Dobell however have taken a huge step in the right direction with “Unguarded”.

For a substantial period of time, Jonathan Trott was the undisputed spine of the English batting line up, shoring responsibilities galore. He blunted many a fierce bowling attack, standing firm like a Colossus at the batting crease. Trott was a veritable mendicant unaffected by either cause or consequence and unmoved by neither circumstance nor calamity. He was the perfect ascetic amongst batsmen, whose concentration remained firmly cloistered between the 22 yards that was his home and his possessed turf. When this formidable monk however lost his preternatural Mojo in the year 2013 in an Ashes series Down Under, things turned ugly. Serene calmness metamorphosed into roiling confusion and the art of batting was but an architecture collapsing without reason. Within two years Jonathan Trott’s international career was done and dusted. What was it that led to this extraordinary tumble from a pinnacle that was scaled with patience, purpose and perseverance?

Trott and Dobell tackle the reasons underlying the downfall of Jonathan Trott as a batsman head on without mincing words or professing a litany of excuses. In the process, they demonstrate with clarity and lucidity the fact that while cricket or any other chosen career may be for a livelihood, it need not be for life. Trott’s debilitating state of mind and progressive deterioration for the love of the game reveals more than what meets the eye. It also serves as a clarion call for all those involved in the game, players, management and the pundits alike to sit up and take note of an indispensable facet which although seeming extraneous to the game is a integral part of the very heart of the sport. The authors elucidate the pompous and impetuous manner in which the words “mental make-up” is used to describe alternatively the success and failure of a cricketer instead of trying to understand the emotional state of mind of the man behind a helmet or a player rushing into the popping crease with a cherry. The nonexistence of a support infrastructure that fails to initially recognize player anxiety and consequently to treat the same with care and caution has led to the pristine game of cricket treading dangerous grounds.

The courage displayed by Jonathan Trott in bringing his sordid story to the whole world is to put it mildly, exemplary. While he might not have achieved the heights which the whole cricketing world expected him to achieve as a world renowned Number 3, he has certainly distinguished himself from being a mere cricketer to an extraordinary human being. In this he has succeeded beyond all imaginable measures. On a personal note, “Unguarded” landed in my hands only a couple of days after I met with a horrific automobile accident. The taxi by which I was travelling with a couple of colleagues (and driven by a particularly reckless driver) crashed head on into an oncoming vehicle leaving me with a shattered femur, dislocation and compound fractures of the hip. Six hours of emergency surgery later, I lay in bed with aching limbs and creaking bones or rather broken ones. Only a book could have diverted the focus off the pain and it was Trott’s biography that I resorted to. Where I was seeking relief, I got succor and where I was seeking sympathy (involuntarily) I received a morale boosting dose of strength. More than everything else I clearly realized the full import of the word – perspective.

For this I thank Jonathan Trott and George Dobell!