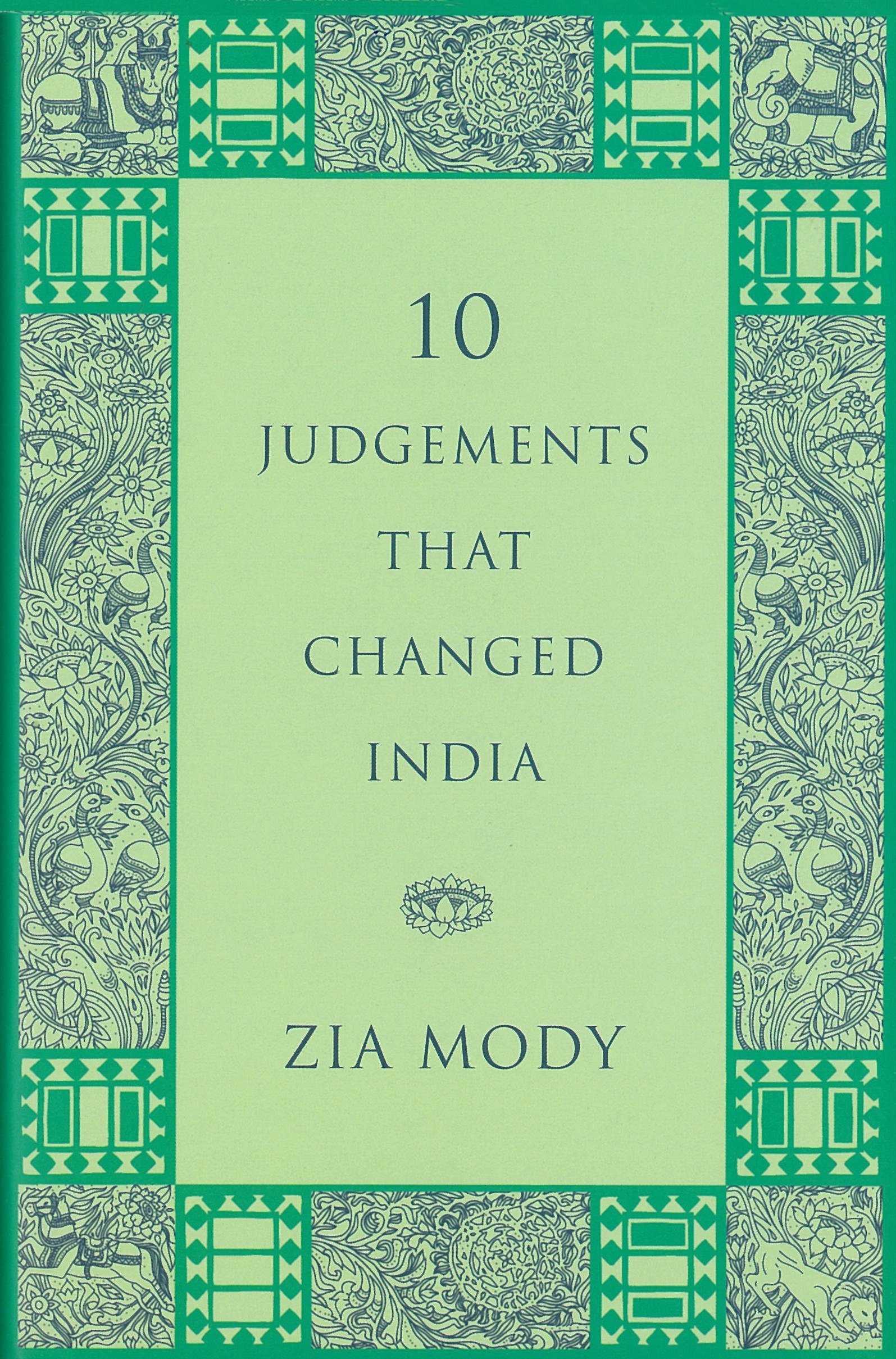 The Indian judicial landscape is a veritable kaleidoscope of the profound and the petty. An accumulated debris of pronounced verdicts spanning more than 7 post-independence decades hides within its messy confines, precocious pearls as well as a phalanx of perfidies. While there have been decisions that have influenced the very societal progression in a positive aspect, there also exist renderings whose very regressive nature put paid to the genuine aspirations and hopes of a multitude. Some judgments find a place in the pantheon of immortality for their prolixity alone, yet there are others carving out an indelible niche courtesy their brimming substance. Hence listing a “Top 10” ranking from this sprawl of maze and mess is something that takes more than just courage to attempt. Yet this is exactly what Ms. Zia Mody, one of India’s most renowned corporate attorneys and the co-founder of AZB & Partners does. Ms. Mody executes this attempt with neither rigidity nor laxity, but with a sense of purposiveness and alacrity akin to that displayed by various judges themselves during the course of discharging their business.

In her book, titled, “10 JUDGEMENTS THAT CHANGED INDIA” Ms. Mody navigates her readers through 10 mercurial judgments that have transformed the legal façade of the world’s largest democracy. Excoriating in their sweep, ebullient in their wake and effervescent in their narrative, these ten extraordinary judgments constitute a bouquet of ten unique flowers, each with its own fragrance, colour, size and shape. Yet in their distinctness lies their unity. Spanning a diverse range of issues, each of the ten cases have had the same cumulative impact in so far as that all of them capture the imagination of the broader public, drawing them in an inclusive manner to a platform that encourages debate, discussion and deliberation. Capturing the sense of imagination of the Indian citizen, these cases bestow upon her a knowledge of rights and obligations, thereby investing in her a perception of belongingness.

Ms. Mody sets us on our path by opening her book in a resounding manner with the epochal Kesavananda Bharati v State of Kerala case. This path-breaking judgment that expounded on the “Basic Structure” of the Constitution was a painstakingly exquisite exercise in elaboration. “Thirteen judges of the Supreme Court sat en banc for almost five months to consider questions that stood to define constitutionalism and the exercise of democratic power in India. This judgment was so lengthy in its construct that it has been designated the ‘longest appellate decision’ of the last century. Spread over an unimaginable length of approximately 800 pages and comprising of 420,000 words, the decision had eleven out of the thirteen judges issuing their separate opinions. A convergence, as to what broadly constituted the intractable, indispensable, and inviolable structure of the Constitution was however reached and it is now a given that the tenets of supremacy of the Constitution, separation of powers between the legislature, executive and the judiciary, sovereignty of India and its democratic polity, dignity of the individual and the mandate to build a welfare state and an egalitarian society all represent the basic Constitutional Doctrine;

The Olga Tellis case disseminates with great resonance the fundamental essence of the very right to life and personal liberty. The Honourable Supreme Court took on the fetid plight of pavement dwellers leading an abject existence of utter squalor, and who were threatened to be evaluated under the Bombay Municipal Corporation Act. The Supreme Court coming down heavily on the high handedness of the Bombay (now Mumbai) State Administration declared that every human being enjoyed the fundamental right to live in circumstances, that at a minimum signified a modicum of dignity. This decision had ripple effects that transcended India and has the distinction of being quoted liberally in manifold judicial precedents, especially in the region of South East Asia.

There are also cases that expose the inadequacies and seemingly inexplicable positions adopted by the Apex Court that goes against the very grain of reason. A classic case in point being the infamous Union Carbide Corporation case.  In December 1984, the Union Carbide pesticide plant in Bhopal, India, leaked over forty tons of the highly poisonous gas methyl isocyanate thereby leaving nearly 3000 people dead and 50,000 people permanently disabled. What’s more, 15,000 people died subsequently from exposure to the poisonous gas. In 1989 the Supreme Court approved a settlement of the civil claims against Union Carbide for a paltry sum of $470 million. On 2 August 2010, the Central Bureau of Investigation filed a petition with the Supreme Court demanding a more stringent punishment for the accused.  This petition sought to reinstate charges of culpable homicide against the accused; a September 1996 order had reduced the charges from culpable homicide to criminal negligence.  In May 2011, the Supreme Court rejected this petition and declined to re-open the case to reinstate the harsher charges.

However, the most harrowing case in the book and one that rends the very soul is that involving a sprightly nurse named Aruna Ramachandra Shanbaug. Poignant in its plea, philosophical in its context and perverted in the facts leading to the very genesis of the protagonist’s plight, this case dealt with the controversial yet topical sphere of legalizing euthanasia.  Section 309 of the Indian Penal Code was subject to a granular and microscopic review by the highest Court and after intense scrutiny, passive euthanasia as against active euthanasia was deemed to be legal subject to the satisfaction of a set of stringent conditions.

The book also dwells on other vital cases such as the Shah Bano case wherein the Supreme Court caught itself in a bind attempting to wax eloquent over an issue that not only stood at the cusp of two laws but also coalesced them. In a noble endeavor to reconcile the provisions of personal law with Sections 125 and 127 of the Civil Procedure Code, the Supreme Court unwittingly inflamed a range of communal passions whose reverberations echo even today.

Ms. Mody also highlights the Herculean efforts put in by the Supreme Court to prevent and prosecute sexual harassment of women at the workplace. The far reaching propositions forming the cornerstone of the Vishaka judgment rule the roost even today in the absence of formally promulgated legislative statutes.

Ms. Mody does an admirable job in imparting the core and crux of each judicial decision. At the nub of every single judgment lies principles of far reaching implications, which unfortunately in the original judgements are obfuscated by length and obscured by some scintillating although avoidable prolixity. Ms. Mody however does not attempt to couch her narrative in ‘legalese’, opting instead to employ a crisp and matter-of-fact narrative. She however supplements her simplicity with copious footnotes that reference all materials and bibliographies that are relevant to the topic on hand.

Since the writing of this book, India has been rocked by quite a number of earth shattering verdicts that have been revered and reviled with equal vigour. The Aadhaar judgment and the right to data privacy, the Nirbhaya case and the decriminalization of homosexuality by way of annulment of Section 377 in the Indian Penal Code, amongst others occupy a key pedestal in the annals of Indian judiciary. Sincerely hoping that Ms. Mody would include these in what would be a much awaited sequel to her stirring book.