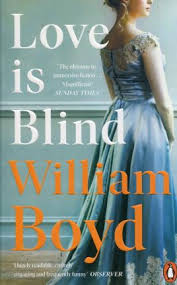 The word apogee is not normally employed to describe a book that constitutes the 15th in a long line of illustrious pearls dexterously strung together by an author of acclaim. Yet, this is exactly the word to describe, “Blind Love” by William Boyd. Incandescent, Irrepressible and Irreverent, “Blind Love” is an apotheosis of dare, deceit, despondency, despair and dangerous delights. Brody Moncur is an affable young man who possesses a singularly spectacular talent for tuning and fine tuning pianos. Escaping the inexplicable wrath of a preacher-father who detests Brody’s very presence – “Black Bastard, Octaroon among others, being the Nouns of choice which Malky Mancur prefers to address Brody – as well as an idyllic but unappealing Scottish manse, Brody sets out to make a career tuning pianos for Channon & Co, a prestigious firm purveying pianos.

Expertise and Encomium sends Brody careening towards higher aspirations as Ainsley Channon, his employer and proprietor dispatches Brody to Paris to embellish the Channon family business there.

Brody strikes gold in Paris when his persuasive efforts succeed in signing on “the Irish Liszt”, John Kilbarron as Brand Ambassador for his company’s pianos. But in the process, Brody also signs up for a malevolent and unenviable bargain. Beginning a dangerous dalliance with Kilbarron’s dazzling, lithe Russian lover, Lika/Lydia Blum, Brodie realises he has inadvertently chewed much more than he can just swallow. Things reach a crescendo when Malachi Kilbarron the wrathful brother of John catches Brody In flagrante delicto with Lika in a modest hotel in Russia. When John Kilbarron challenges Brody Mancur for a duel to resolve the blotch caused to his honour, Brody stares unblinkingly at an existential crisis.

Thus begins for Brody a perilous sequence of journeys spanning countries and subterfuges transcending the subtle. From the cafes of Paris to the theatres of St Petersburg, from the warmth of Nice to the blazing hot tropical environ that is the preserve of Andaman and Nicobar Islands, Boyd’s book thrills, humours, angers and hurts the reader in equal measure. Raw and resurgent passions find an invariable connect with inevitable causal consequences as a phalanx of characters both revered and reviled weave in and out with pace and panache. Malachi Kilbarron’s relentless pursuit of Brody keeps both the plot and the reader on a knife’s edge. While the hunter takes on an almost supernatural visage, the hunted makes an admirable and adroit effort to rise above his innate vulnerabilities to always stay one step ahead. The predator and prey engage in a deadly game of hide and seek with neither an inch yielded or quarter seized.

Some of the most mesmerizing bits of the book make for some of the most complicated albeit fascinating reading. For example, Mr. Boyd remarkably takes his readers through the convoluted workings of the piano as seen through the expert eyes of Brody in a manner that is technical yet absorbing. “Now all the moving parts were visible beyond the black and white keys – the hammers, the rockers, the jacks, the whippens, the dampers – its innards were exposed like a clock with its back off or a railway engine dismantled in a repair shed. Mysteries – music, time, movement – were reduced to complex, elaborate mechanisms. People tended to be fascinated.”

The grave is waiting for one and all.”