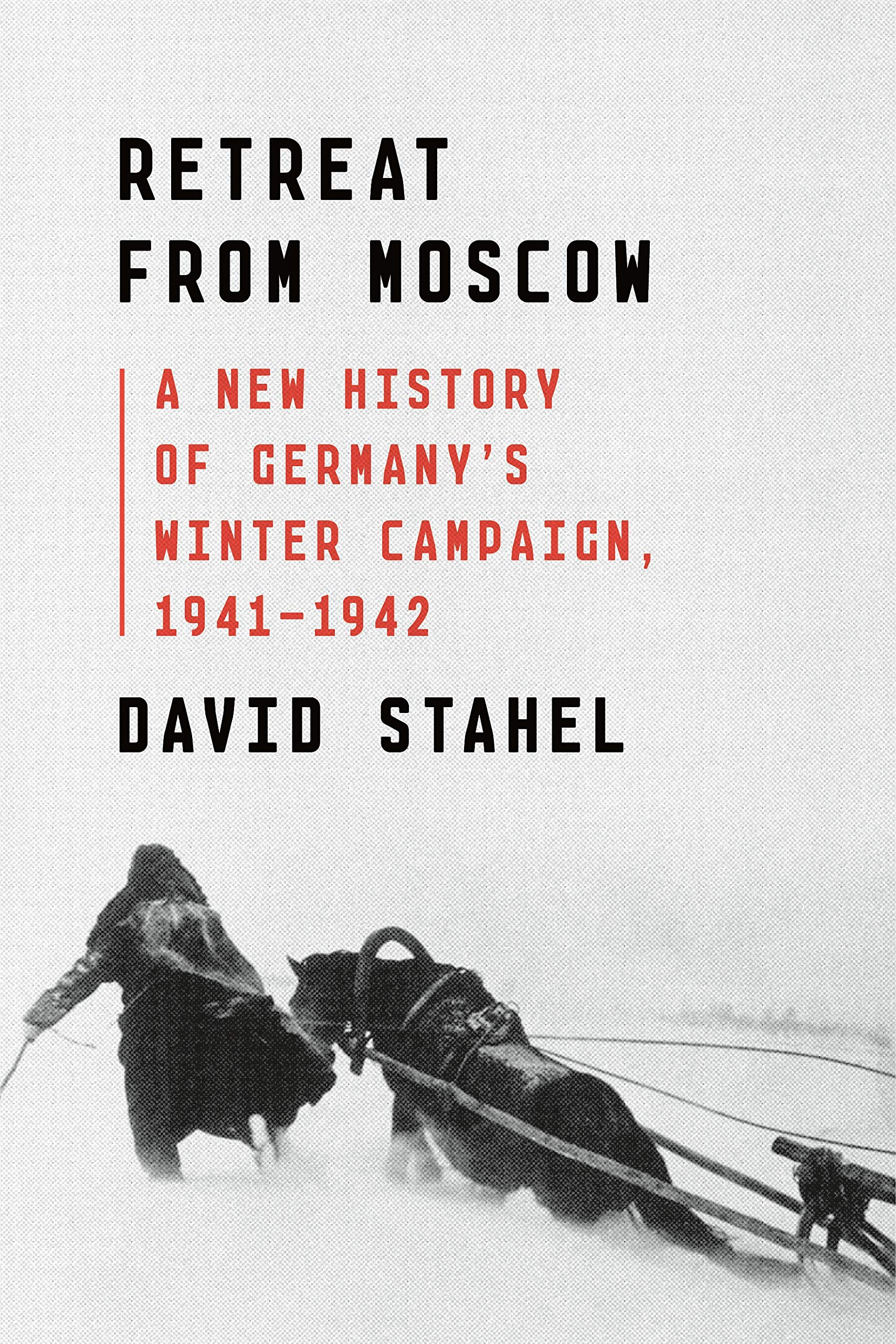 Riding on the back of research that can only be appropriately described as ‘monumental’, David Stahel’s “Retreat From Moscow”, portrays in an unsparing and eviscerating fashion, Germany’s ill-fated winter campaign between 1941 – 1942. Drawing on new sources of history, Mr. Stahel argues that the despotic dictator Adolf Hitler’s “first defeat” took place as early as in the summer of 1941. Operation Barbarossa (the code name for Hitler’s invasion of the Soviet Union) which was to have culminated in the Fuhrer securing his much trumpeted Lebensraum (living space) in the East, instead transformed into a bloodied and blithering blunder of irredeemable proportions. From the beginning of 1941 till early 1942, both the Wehrmacht and the Red Army, competed with each other in resorting to tactics that were inexplicable and maneuvers that could only be termed indecipherable. It would be wrong to foist the responsibility for such mindless mechanics solely upon the Generals commanding their troops. While Hitler and Army High Command (Oberkommando des Heeres –OKH)’s Halt Orders and War Directives prohibiting beleaguered groups from withdrawing, in the face of a continued and relentless onslaught had the German Army in a bind, Stalin’s equally incalculable but vengeful determination to hurl everything the Soviets had at a more experienced and well entrenched opposition, in spite of staggering losses of life and limb had the Soviet forces in veritable tatters. What’s more all of this fighting was being conducted in the most inhospitable and treacherous of conditions. For e.g. the diary of Erich Hager claimed that on the 6th of December, the thermometer had reached minus 46 degrees Celsius near Tula.

As Mr. Stahel painstakingly informs us, what prevented the German army from a complete annihilation was the ingrained hall-mark system of “mission oriented tactics” (Auftragstaktik) which enabled bold “initiatives” to be taken at the front. A combination of brazen and tactful disregard of Hitler’s “retain-ground-at-any-cost” instruction resulted in the Germans retreating to temporary safety.

The Soviets, suffering from an appalling lack of leadership and experience did not have the luxury of any mission oriented tactics. Drawing upon statistics provided by Lev Lopukhovsky and Boris Kavelerchik, Mr. Stahel informs his readers about the casualties suffered by the Big Bear. “. revised upward the Soviet winter total, arriving at more than 1.6 million Soviet losses, which tells its own story when set against the German total of just 262,524 casualties for a slightly longer period (November 26, 1941, to February 28, 1942).

Pandering to Hitler’s whims and wanton mood swings, his coterie, as Mr. Stahel demonstrates, filtered information coming in from the front thereby distorting the actual goings on and feeding the murderous leader only what he wanted to hear. The likes of Field Marshal Wilhelm Keitel who controlled the Fuhrer’s Headquarters and Franz Halder, then chief of staff of the Army High Command (OKH), provided detailed instructions to the “Generals” about both the news to be conveyed and the manner which was to be adopted while presenting oneself before Hitler. However, as Mr. Stahel demonstrates with extraordinary clarity and verve, there were brave and brilliant Generals and Commanders who cocked a snook at the famous “halt order” (Halthefehl) issued by their Supreme leader. Chief amongst such dissenters was the immensely respected and incredibly measured Günther Adolf Ferdinand von Kluge. The man who later on became an active conspirator in the 20 July plot to assassinate Hitler, and who took his own life on 19 August 1944, when the plot failed, was almost single handedly responsible for the Army Group Centre remaining intact during the winter campaign. As Mr. Stahel elaborates, “His so called “middle solution” sought, under the most difficult circumstances, to chart a response between the all-out retreat practiced by the likes of Heinz Guderian and the fanatical resistance demanded by Hitler. Kluge’s limited withdrawals sought to avoid exhausting the men, while seeking to preserve as much equipment as possible.” This was no easy task, especially considering the predilections of Hitler to ingloriously sack anyone possessing the will, if not the temerity to challenge his diktat. An unfortunate but classic case in point was the case of Walther von Brauchitsch, a Field Marshal and Commander-in-Chief. Contemptuously treated or mistreated by Hitler, this decorated war veteran was dishonorably discharged from his duties upon incurring the wrath of his leader.

The German’s while strategically retreating from the positions that they had captured and occupied followed a scorched earth policy. Burning every village in their wake, their main objective was to leave not one structure standing or one inhabitable building intact. For example, in December 1941 the retreating forces of Schmidt and Guderian’ s armies wreaked wanton misery upon both people and property in Orel. “An MG 42 was set up in the main aisle of a church. Then the Russian men, women and children were made to shovel snow; then they were taken into the church, without knowing at all what was happening. They were shot immediately with the MG 42 and petrol was poured on them and the whole place was set on fire.”

With the propaganda machine on both the warring sides working overtime, the losses incurred by each side was grossly overestimated by their opponents. The propaganda Minister and a rabid Nazi, Josef Goebbels cranked out incredulous quantum of fictitious victories thereby satiating the anxious Germans. The Soviet Union on the other hand had its own share of mercurial writers such as Ilya Ehrenberg, churning out reams of glorious battle field exploits which either had taken place only in the author’s mind or whose outcomes grossly exaggerated glorifications.

While two sparring vainglorious and pretentious men played dice with the future of their respective countries and country men, the gallant soldiers who were sacrificial pawns in the broader scheme of things fell prey to a legion of uncontrollable factors. A crippling loss of materiel, and men not to mention the specter of frost bite and lice infestation, took an enormous toll. “While epidemic typhus was the most common of louse-borne diseases on the Eastern Front, it was not the only disease transmitted by the lice. Rickettsia Quintana caused trench fever, and Borrelia recurrentis, relapsing fever. There was also spotted fever, but this was spread by mites, ticks, and fleas, not lice.” Consumption of the stimulant Pervitin, colloquially termed Panzerschokolade (tank chocolate) became rampant and led to the drug being subject to the Reich opium law.

Ultimately, when the dust settled and the spoils of war were temporarily counted, both sides were left not just licking their wounds or massaging hurt prides. They were left to nurse permanently etched scars that would haunt them for not just their lives, but future generations as well. To quote Willy Peter Reese, who was in the eye of the storm and was returning home on furlough:

“I lived on the edge. Death, the blind strangler, had failed to find me, but a human being had died in Russia, and I didn’t know who it was…We were required to subject our own lives to the will of the age, and our destiny began like a tale of duress, patience, and death. We could not escape the law, there was a breach in our unfinished sense of the world, and, like a dream, the march into the other and the unknown began, and all our paths ended in night.”

“Retreat from Moscow” – a Masterpiece dealing with a perfectly avoidable tragedy; or was it inescapable?