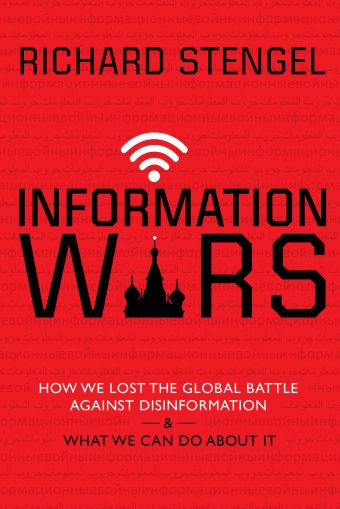 Gleb Olegovich Pavlovsky a Russian political scientist and a self-proclaimed “political technologist”) once famously exclaimed that to get people to vote the way you want, “you need to build a fairy tale that will be common to all of them.” Who better to assimilate this fact than Richard Stengel. Mr. Stengel, in his capacity as the longest serving Under Secretary of State for Public Diplomacy and Public Affairs in American history (2013-16) spent his entire tenure directing all resources at his disposal to counter the threat of global disinformation.

In a hard-as-nails, quasi memoir Mr. Stengel regales his readers as in a quest to combat the plague of disinformation, he unwittingly locks horns with two of the deadliest purveyors of the tradecraft of disinformation. No.55 Savushkin Street in St Petersburg, four story limestone building with neither razzmatazz nor name was the very motherlode of disinformation. The machines of propaganda were lubricated and greased in this otherwise nondescript building. No.55 Savushkin was Russian strongman Vladimir Putin’s “troll factory.” Registered to the “Internet Research Agency”, “a shadowy Russian company that seems to do everything from creating sock puppets to practicing cyber vandalism…every day, in two shifts, a few hundred young people spend their time writing blog posts, tweets, Facebook posts, VKontakte posts and much more.” Spewing out thousands of content or rather malcontent at a speed which would put the reproduction of rabbits to utter shame, this troll farm was the veritable synonym of malicious disinformation.

As Mr. Stengel reveals in startling detail, the other most insidious source of disinformation emanated from a less tranquil but unlikeliest of settings. Al-Qaeda and the Islamic State of the Iraq and Levant (“ISIL” a.k.a “ISIS”) may not strike one as popular mediums of news enjoying stellar ratings. Yet, the two most murderous terror outfits wreaking mayhem across the globe, also double up as genius peddlers of disinformation. As Mr. Stengler, was briefed by a senior intelligence officer, who employed an element of morbid humour for added effect, “ISIS is a distributed network. Al-Qaeda is Yahoo. ISIS is Google.” As Mr. Stengel explains, the twin kingpins of terror while not slaughtering civilians in Syria or reducing cities to a rubble in Iraq, were busy circulating English language magazines. While Al-Qaeda’s online publication was – ironically titled “Inspire”, ISIS’s competing offering was named “Dabiq.” Writing about Dabiq, Mr. Stengel says, “it was a digital publication…it actually had a pretty sophisticated layout and decent pictures…. the two publications debated each other about Islamic theory. They were like the Time and Newsweek of medieval Islamic theology.” Incidentally before accepting a job with the State, Mr. Stengel was Time ‘s 16th Managing Editor from 2006 to 2013.

Attempting to combat the pernicious princes of fake news, let alone conquering them, as Mr. Stengel realised was an unenviable if not an insurmountable task. To add insult to injury, the weapons available in his arsenal was turning out to be woefully inadequate. The State was grossly ill-quipped to deal with the sophistry and chicanery of both the Russians and the reprehensible terrorists. As Mr. Stengel elucidates, the actual canary in the coal mine was not the physical war and bloodshed but the information war that was engulfing and enveloping the digital world in a sweep, all encompassing. When Putin’s special Spetsnaz forces invaded Crimea, backed by a narrative of white lies and brazen denial, they were merely paying obeisance to the principles of Igor Panarin and Alexander Dugin, Russia’s two primary theorists of information warfare. Dugin, popularly known as “Putin’s Rasputin” coined the term “netcentric warfare”, a military line of effort. Hand in glove with the digital propaganda machine was RT the English language Russian TV channel. Conceived by former media minister Mikhail Lesin, and Russian president Vladimir Putin’s press spokesperson Aleksei Gromov, RT in the words of Mr. Stengel, “used all the traditional tricks of tabloid TV: attractive anchors, colourful graphics, wacky guests, sensational chyrons.” Even Julian Assange was provided a TV segment for his hosting. However, at the helm of all this glitz and glamour is Margarita Simonovna Simonyan, editor-in-chief and master orchestrator of the disinformation campaign.

Similar was the strategy adopted by ISIS. Their suave imagery, magnetic resonance and the affiliation towards a cause acted as an irresistible lure to the youth to either join them in their homicidal escapades or to essay the role of Lone Rangers in wreaking havoc through individual acts of mindless mass shooting and suicide bombings. Someone even termed ISIS the Muslim version of the Baader-Meinhof gang.

With a view to countering the “Russification”, and radicalization of the world, Mr. Stengel undertakes some bold and ingenious steps. In addition to creating and overseeing the Global Engagement Center, the United States’ only stand-alone anti-ISIL messaging entity., he also co-opted foreign allies in establishing the Sawab Center in Abu Dhabi. Initially nursing honest ambitions, the Sawab Centre has become a model organization for disseminating anti-ISIL messages and campaigns. The Under Secretary also oversaw the Future Leaders Exchange (FLEX) program is a competitive. This was a merit-based scholarship program funded by the U.S. Department of State. FLEX students who pass multiple rounds of testing earn a scholarship to spend an academic year in the United States living with a volunteer host family and attending a U.S. high school. Unfortunately, Russia prohibited its students from enrolling in the FLEX programme following a false allegation of the abduction of a Russian boy, who was part of the FLEX programme.

Even while dealing with a subject as serious as that of disinformation, Mr. Stengel juxtaposes a blend of sardonic wit with dollops of wisdom. For example, while describing the filtering process to which Mr. Stengel was subjected to before being cleared for service as the Under Secretary of State. “For the SF86 and the Senate Foreign Relations Questionnaire, you have to list every foreign trip you have taken over the past 14 years, every significant relationship you had with any foreign national on the trip, and to the best of your ability, an estimate of how much you drank on these trips, Oh, and whether you had any illegal drugs.”

Mr. Stengel also recounts a painfully embarrassing personal encounter while experimenting with 140 characters on Twitter. Tweeting in a fit of fury about the downing of MH-17, a Malaysian Airlines commercial jet with 298 passengers aboard, by Ukraine separatists, who fired a Russian made BUK missile at it, Mr. Stengler overcome by rage, expresses his disgust on the incident. However instead of employing the hash tag #UnitedForUkraine, he falls prey to the auto-complete function and chooses the first hash tag to appear on screen. Thus #UnitedforGaza instead of #UnitedforUkraine.  As may be expected, even though he deletes the tweet subsequently, he gets panned on Twitter by Twitterati, of silly and sublime breed alike.

So long as there are warring factions with entrenched beliefs in their ideologies however manic or senseless, the armoury of disinformation will not be lacking in myriad weapons. This has been evidenced in eviscerating detail by the Trump campaign and the Russian involvement in it. However, hope quelling maliciousness is brought to bear, courtesy, the indefatigable efforts of intrepid people, the likes of Richard Stengel.