The second most scathingly dishonest environment has to be an overcrowded, cramped, noisy and impatient airport lounge, thought Siew Kuan. The first being an enclosure in a Courtroom from which one held forth. The low humming murmur of the dysfunctional air conditioner was being drowned out by a cacophony of railing expletives, genuine lamentations and flagrant bursts of anger.

You could not blame the protesting mass of passengers. Bar Mitzvah’s could not wait; neither could funerals. The banks of suspended electronic screens blinked away the fact that there was a delay in departure. However, there was no devil in the details. The reason for the delay was not communicated to the throng. All the flight authorities could offer by way of an explanation was the tried, tested, perfected and by now cliched two-word excuses, “technical snag.”

“Dinner will be served to all the passengers travelling on board Delta Airlines flight no 215, at the hospitality lounge” crackled a voice over the intercom. The disgruntled voices suddenly fell silent and rushed headlong towards the lounge. “Ah! what freebies can do to stymie genuine concerns, even if what is offered is totally disproportionate to the suffering” wondered Siew Kuan. 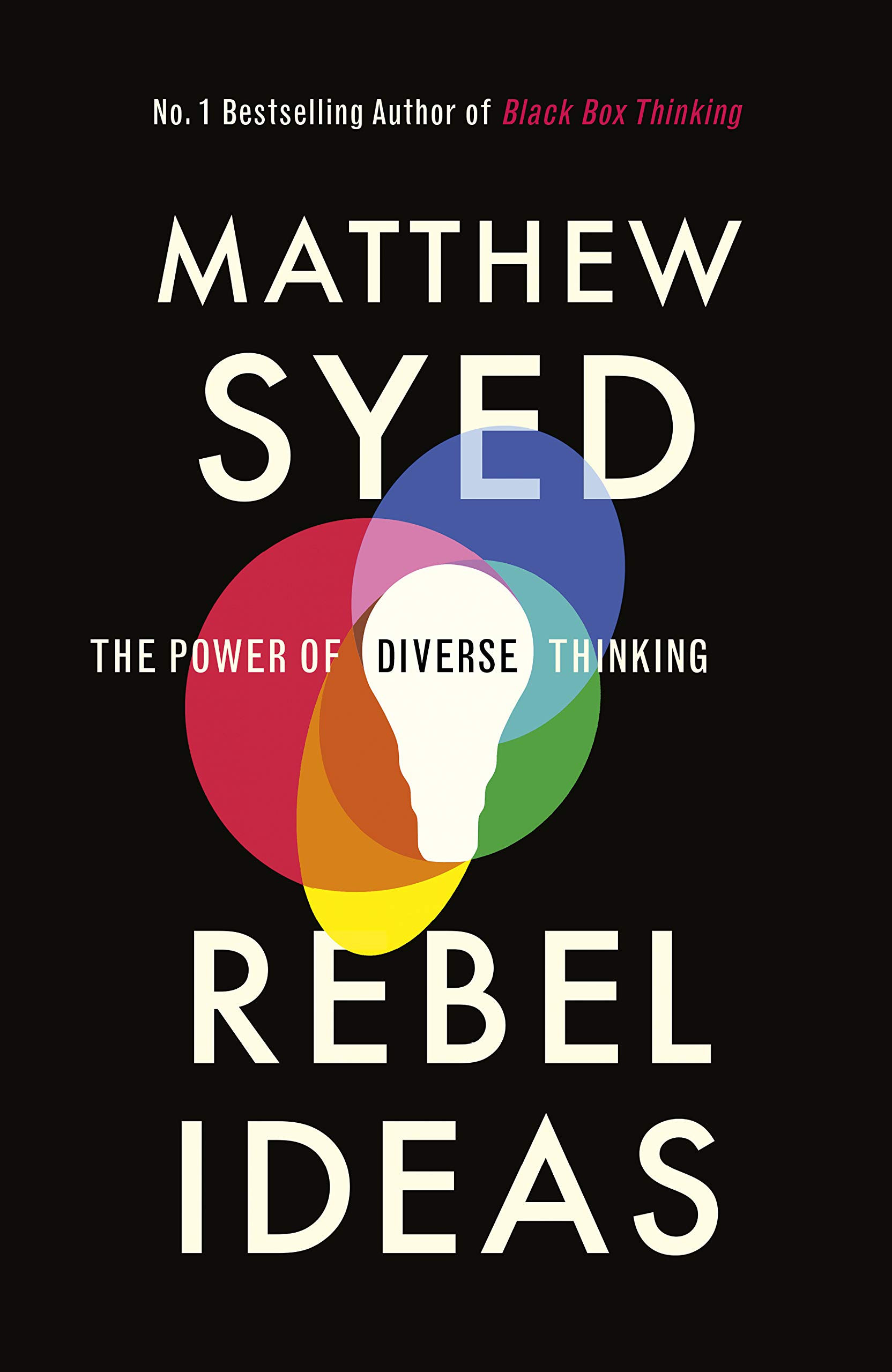 What connects the tragic Everest expedition in May 1996 that consumed the lives of legendary mountain climbers such as Rob Hall and Scott Fischer, with the 9/11 catastrophe where the CIA choose to adopt a blinkered approach to the many cogent threats and chilling clues that emanated from Osama Bin Laden even as early as in 1996? Is there even a link between these two diverse, albeit tragic events? In a bold and provocative book, “Rebel Ideas”, the Sunday Times bestselling author and co-founder of the charity, Greenhouse, Matthew Syed tackles the issue of cognitive diversity, (or a deep lack of it) that characterizes the fabric of our society. And in this process, he reveals fascinating potentials and probabilities which may be both exploited and overlooked – such as the critical binding threads between two seemingly disparate events.

So here is “Rebel Ideas” summarised in the form of a few key takeaways:

The Curse of  “Homophily”

When a group of people glued by the same set of thinking assemble together to   solve a problem, they bring to the table a homogenous framework, which while greatly aiding and abetting in arriving at a consensus, might totally fail to identify heterogeneous perspectives. For example, a lack of cognitive diversity in the hiring policies of the CIA (which was mostly Pale, Male and Yale at the time of the 9/11 disaster) might have unwittingly resulted in the ignoring of a myriad of chilling clues that proliferated long before the actual tragedy hit home. For example, as highlighted by Lawrence Wright in his Pulitzer Prize winning book, “The Looming Tower”, clad in spartan clothing and issuing proclamations from within the confines of a cave in the mountains of Tora Bora might have made Bin Laden look not just like a Medieval Luddite, but a comically deranged individual too. But the man was a master strategist. By resorting to such tactics he was only appealing to the sentiments of thousands of Islamic youth to step onto the path of radicalisation, since it was from a very cave during a period known as Hejiraa that the vision of the Koran occurred to the Prophet. Yet Richard Holbrooke, one of the most senior officials under the Clinton regime, exclaimed, “how can a man in a cave out-communicate, the world’s leading communication society?”. As Mr. Syed illustrates, one reason for this myopic view was an absence of diversity in the hiring policies of the CIA. A dearth of Muslim agents within the CIA (who would have been alert to at least some of the messages originating from Al -Qaeda), coupled with the existing homogeneity cast a perception blindness, which in turn led to a tragedy of humongous proportions, that was otherwise, preventable.

Bletchley Park, a non-decrepit estate in rural Buckinghamshire covered itself in immortal glory when a team of men and women working within its confines managed to crack the Nazi encryption device termed Enigma, thereby shortening the very tenure of World War II by at least 3 years. What made Bletchley Park the legend of lore, was the eclectic mix of people sheltered within. From Alan Turing, one of the greatest Mathematicians of the twentieth century, Leonard Foster, a scholar of German and the Renaissance to Norman Brooke Jopson, a professor of comparative philology, the team at Bletchely Park was a classic example in diversity. Of course rounding off the motley crew there was Stanley Sedgewick, a clerk with a firm of city accountants and a crossword tragic, who had participated in a contest hosted by the Daily Telegraph for tackling a cross word context under controlled conditions.

Constructive Dissent on the Everest

The ghastly tragedy that befell multiple groups of climbers as they attempted to create history on the world’s tallest mountain peak on the 10th of May 1996, highlights the peril of the absence of what Mr. Syed terms as “Constructive Dissent.” Even though many of the climbers in Rob Hall and Scott Fischer’s team were experienced altitude climbers, it was their first shot at Everest. Hence there was an acute prevalence of “dominance dynamics” between the guides and their clients. Such a steep hierarchy, however proved tragic as many vital clues were prevented from being disseminated. For example, when Martin Adams one of the clients, noticed thunder clouds as he inched ever closer to the summit, he knew his team had to get out of there. Adams was after all a commercial pilot with loads of experience with thunder clouds. But still he didn’t speak up because he was low in the chain of the dominance hierarchy.

In 1996, MIT researchers Marshall Van Alstyne and Erik Brynjolfsson issued the following warning: “Individuals empowered to screen out material that does not confirm to their existing preferences, may form virtual cliques, insulate themselves, from opposing points of view, and reinforce their biases. Internet users can seek out interactions with like-minded individuals who have similar values, and thus become less likely to trust important decisions to people whose values differ from their own.”

The researchers termed this online fissure and faction formations, Cyberbalkanization.”  Mr. Syed illustrates both the concept of an Echo Chamber and its consequences in a riveting fashion by informing his readers about the transformation of the once white supremacist Derek Black. Home-schooled by parents who were the rabid epitome of white supremacist beliefs, Black was insulated from being in the proximity of people nurturing alternative views and was fed continuously upon the fodder of white supremacy. This Echo Chamber from which he led his existence formed an information bubble into which contradicting views were not allowed to penetrate. It took Matthew Stevenson, a Jewish friend with a Yarmulke cap and a series of open discussions about sensitive and delicate topics on race and colour to being down Derek Black’s epistemic walls and transform him from a rabid pro-white propagandist into a fervent anti-racism advocate.

Unconscious bias refers to “the way that people are denied opportunities not because of a lack of talent or potential but because of arbitrary factors such as race or gender.” Eliminating such bias would broaden the domain and realm of collective intelligence.

Corporations, with a view to channelizing the benefits of diversity, are actively engaged in a mechanism called “Shadow Boards.” Young personnel lend advice to executives on key decisions and strategies. This technique according to Mr. Syed, “lifts the conceptual blinkers that can attach to age.”  In fact Gucci benefited to such an extent by employing this shadow boarding techniques, that its revenues leap-frogged a mind numbing 136% – from 3,497 million Euro in FY 2014 to 8, 285 million Euro in FY 2018

A willingness to offer one’s insight to others; to share one’s perspective and to impart one’s wisdom, in turn accords an opportunity to received, according to Mr. Syed. Empirical analysis conducted by Professor Daniel Levin of Rutgers Business School on the importance of dormant ties also lends further credence to this proposition.

“Rebel Ideas” by Matthew Syed is a thought provoking, insightful and relevant work, especially in an age where independent thinking is obfuscated by the pernicious spread of fake news, authenticity is clouded by disinformation and cohesiveness is marred by a group think of the most malicious breed.