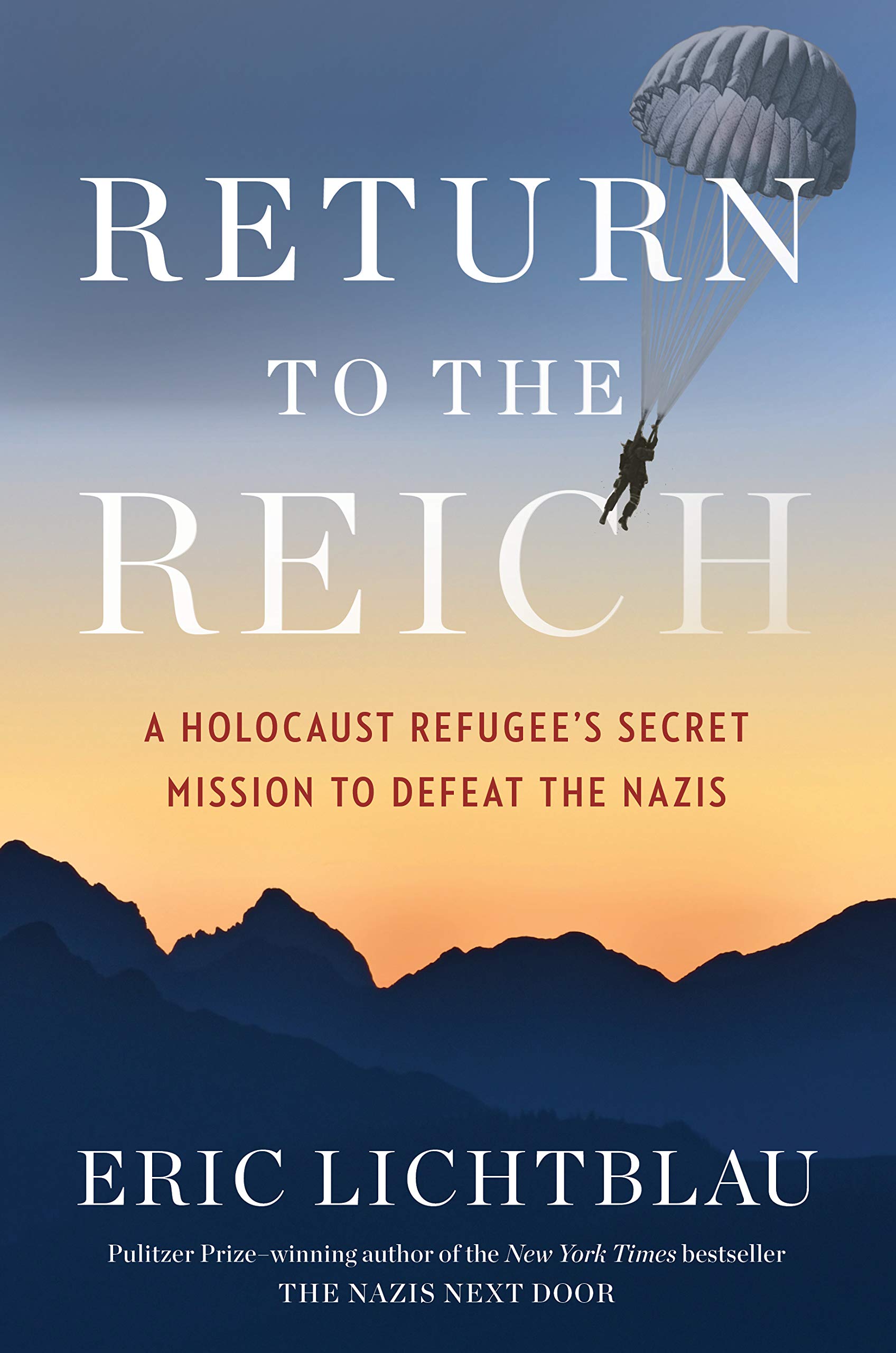 “Return to the Reich” by Pulitzer Prize winning author, Eric Lichtblau is a thrilling and racy account of the extraordinary exploits in subterfuge pulled off by three indomitable men right behind enemy lines. Private First Class Fred Mayer, Sergeant Hans Wynberg and the Wehrmacht deserter Franz Weber, were tasked by the Office of Strategic Services (“OSS”), a wartime intelligence agency of the United States during World War II, and a predecessor to the Central Intelligence Agency (CIA) , to penetrate German lines in the Tyrolean capital of Innsbruck in Austria. The motive: to garner as much intelligence as possible on the despotic Adolf Hitler’s proposed last and violent stand in the Alps against rapidly advancing Allied Forces. If this resistance, rumoured to be known as the Festung or the ‘fortress’ was to be left unchecked, then there was the unenviable and unsavoury prospect of the World War being prolonged for a few more months, if not weeks.

As Mr. Lichtblau regales us in fascinating detail, Freddy Mayer was one astounding individual. The son of Heinrich Mayer, a decorated German war veteran, and also the recipient of an Iron Cross medal, Freddy’s life is turned upside down with the ascendancy to power of the Nazi Party. The otherwise tolerant and accommodating town of Freiburg becomes a bastion of the Third Reich philosophy. The Mayer family, forced to desert their family home and business, clamber aboard the SS Manhattan and in March 1938 find themselves at New York. The calamitous strike on Pearl Harbour, that sucked America into World War II provided the most appropriate opportunity for Mayer to do his bit in fighting the very forces of evil that had led to his family getting uprooted from their own home. However, Mayer’s application papers get rejected solely on account of the fact that he was a Jew of German descent. A paranoia of “Fifth Column” incursions cast aspersions on both the motive and loyalty of 1.1 million Americans of German, Italian and Japanese descent. However, a paucity of both physical bodies and intellectual information, ensured that Mayer was drafted into the OSS, a brainchild of celebrated World War I hero William Donovan. As Mr. Lichtblau informs his readers, the ambitions of the OSS stretched from training bats to drop bombs and injecting Hitler with female hormones to make him less aggressive.

Hans Wynberg, Mayer’s radio operator and perpetrator-in-crime also had his justified grouse against Hitler and his forces. Hans and his twin brother Luke were dispatched to the United States by his astute father who feared the worst for the Dutch in the event of the country being run over by the Germans. His worse prophesies come true as the Germans not only occupy Netherlands but arrest Han’s parents and his little brother Robbie before putting the trio away at the infamous concentration camp as Auschwitz, where the family perishes.

Franz Weber, a twenty-three-year-old Prisoner Of War (“POW”) inside Camp 209 in Naples was a man nursing a wounded conscience. Although fighting for Hitler, his beliefs were in direct contradiction to that of the brutal Nazis. He was also inextricably bound by Gewissen – his conscience as a Catholic, which prevented him from engaging in unspeakable atrocities, which for his fellow soldiers constituted pleasure and purpose. Hence when Dyno Lowenstein, Mayer’s boss approaches Franz with a proposal to not merely defect but work for the OSS, he agrees immediately.

On the 25th of February, 1945, Mayer, Hans and Franz are para-dropped from a B-24 Liberator piloted by the irascible twenty-one-year-old John Billings, to land near the Sultztaler Glacier at an elevation of 10,500 feet. From here begins the unbelievable story of Operation Greenup or Operation Gulliver that has now attained immortality in the lore of espionage. Franz Weber, now calling himself Leutnant Erich Schmitzer, and armed with a Nazi Soldbuch identification, proceeds to Innsbruck. Mayer and Hans are his supposed deferential collaborators. The primary objective of their mission is to glean invaluable information about the German activities surrounding The Brenner Pass. A Pass dividing southern Austria and northern Italy for some sixty miles, The Brenner Pass acted as a veritable lifeline for the Nazis, transporting weapons and troops to the frontline. Any disruption to this line would create havoc for the Nazis sending their supply schedules into a tailspin.

Banking on an incredibly intricate system of covert networking, Mayer seeks out Nazi resisters and disgruntled populace who are more than just eager to see the decimation of the Nazis. Popularly known as “cut outs”, they included Alois Abenthung, a former Burgermeister in Oberperfuss, and Franz’s own fiancé Annie. Hans strings up a communication platform and works from the attic of an allied sympathizer and the trio begin transmitting some extraordinarily delicate & confidential information back to OSS Head Quarters. For example, Mayer, obtaining Nazi uniform and papers surreptitiously, walks in an audacious manner into a barracks for the Nazis and even manages to get an assistant who irons his uniform and shines his boots!  Disguised as a Nazi soldier on recuperation, strikes a conversation with a more than just boisterous Nazi officer. Fueled by both pride and copious quantities of wine, the officer, by now garrulous, boasts about the fortification of Fuhrerhauptquartier – Hitler’s underground bunker. The spectacular quality of details divulged include even the precise location of the bunker.

But as Mr. Lichtblau admirably reveals, the most wonderful and material missive of Messrs Mayer, Hans and Franz involved leaking information about a massive caravan of military supplies heading for the front line in Italy. Upon receiving this information, the 15th Air Force sends a reconnaissance mission which corroborates Mayer’s stupendous information. B-17 fighter planes swooping down upon 26 trains of 30 to 40 cars each – and stuffed with ammunition, tractors, anti-aircraft guns, gasoline and light equipment – bomb them with the utmost ferocity before reducing the caravan to a smouldering spectacle of ruin and rubble.

However, Mayer’s egregious attitude and an eagerness that even extended to insubordination brings him right at the door step of death, as after weeks of sabotage, surreptitiousness and secrecy, the truth and the Gestapo finally catch up with him. Mayer is sold out by a mercenary and turncoat, Karl Neiderwanger, a man who had earlier informed Freddy that he could produce five hundred resistance fighters for him, and Hermann Matull a Nazi Radio Operator who defected to the OSS before agreeing to work for the Germans as a double agent. Matull was derisively termed, ‘a real gutter snipe” by his OSS trainer Walter Haass. Walter Guttner, an Obersturmfuhrer, in charge of Mayer’s interrogation employs the most extreme measures to squeeze out information from Mayer. Slapping and punching Mayer, rupturing his right eardrum, knocking out 6 of his teeth, whipping him until his back had deep cuts and waterboarding him were some of the techniques resorted to by Guttner, during Mayer’s seven days of Gestapo custody.

As suddenly as he was arrested, Mayer is released and is escorted to the house of the most powerful Nazi in Tyrol: Gauletier Franz Hofer. In a jaw dropping spectacle of self-professed diplomacy, Mayer convinces Hofer to not exhort his soldiers to fight but to lay down their arms as further encounters would only be futile. Incredulously, Hofer heeds Mayer’s pleas and surrenders to the Allied forces. Innsbruck is thus liberated without a single drop of blood being shed.

As Mr. Lichtblau concludes, the Gulliver mission will go down in the annals of military history as one of the most successful espionage operations engaged in by the Americans. The “Das Verwegene Trio” or the “Three Swashbuckling guys”, not only secured intelligence to bomb Nazi supply trains, but also tracked German troop movements, pinpointed Hitler’s bunker and in a feat of insurmountable stupefaction, arranged the surrender of Innsbruck!

But the core and crux of Mr. Lichtblau’s wonderful book – a monumental testimony to the preservation of humanity –  is contained in one of its concluding passages. Mayer’s meets with Guttner, who is now imprisoned, at the end of the war “Do anything you want with me,” Guttner begs, “but don’t hurt my family.”

“Who do you think we are?” Mayer replies. “Nazis?”

Although Freddy Mayer for his show of exemplary and singularly undaunted courage was honoured with the Legion of Merit, the Congressional Medal of Honour was denied to him. One of the banal excuses proffered for this travesty was that, Freddy’s daring acts, did not demonstrate “actual conflict or direct physical contact with an armed enemy.”

But as Mr. Lichtblau beautifully chronicles in this absolute masterpiece, may honours be damned! The honourable will live forever!