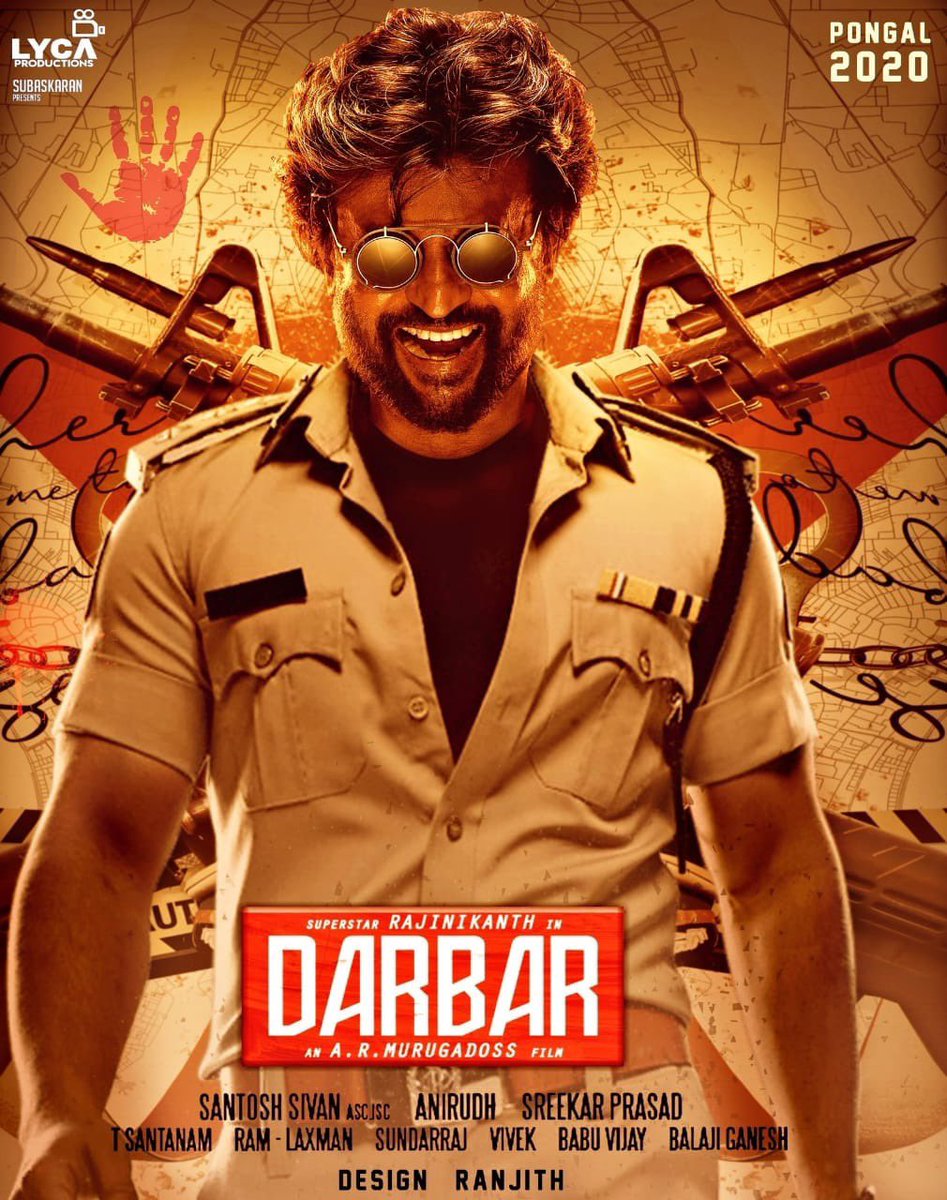 Prior to reviewing the hotly anticipated A.R. Murugadoss directed movie “Darbar” starring Superstar Rajinikanth (Rajini), that hit the screens on the 9th of January, 2020, a disclaimer is in order. I am an impossible, incorrigible and inveterate Rajini tragic. Hence there is an inevitability attached to the fact that a degree of bias would creep into my evaluation. Having said that I promise to be as objective as possible striving hard not to compromise assessment at the altar of adulation. So, not being Mark Antony’s Brutus, who after all was an honourable man, here goes!

First things first. “Darbar” is NOT “Baasha.” There is an unfair proclivity amongst critics and laymen alike to compartmentalize the Rajini Filmography into Baasha and post-Baasha periods. Employing Baasha as the gold standard against which its successors are judged is doing injustice both to the Superstar as well as his Directors. “Darbar” is 169 minutes of glorious Rajini mayhem, mania and mannerisms. Both Karthik Subbaraj, initially with “Petta” and now Murugadoss have phenomenally succeeded where the likes of Shankar and Ranjit have colossally blundered with Enthiran -2, Kabali, and Kaala respectively. The great poet, author and Nobel laureate Rabindranath Tagore once famously said, “a mind all logic is like a knife all blade. It makes the hand that uses it to bleed.” Murugadoss grasps this nuance to perfection and produces an entertainer that is by, for and of Thalaivar.

Aadithya Arunasalam (“Rajini”) a top cop is posted to the throbbing metropolis of Mumbai to put paid to a proliferating menace of substance abuse and trafficking in women. Arunasalam engages in a burst of extra judicial killings that reek of utter disdain and remorselessness. Managing to get to the root of the problem, Arunasalam succeeds in nabbing Ajay Malhotra (Prateik Babbar), the son of Vijay Malhotra (Nawab Shah), a business tycoon and the mastermind behind the purveying of drugs in the city. But when Hari Chopra (Suniel Shetty), a dreaded gangster who made a veritable mockery of the police force 27 years earlier before fleeing abroad, makes a menacing return to his motherland to wreak vengeance by targeting Arunasalam and his daughter Valli (Nivetha Thomas), all hell breaks loose.

In a plot that is if not gripping, exhilaratingly engaging, Rajini rules the roost. In a performance that mirrors “Padayappa” for entertainment quotient, and Petta for ‘Rajinisms’, “Darbar” is both Murugadoss tribute to Rajini fandom and Thalaivar’s offering to his fanatical followers. Oozing patented style that has made him one of the greatest entertainers in the annals of Indian cinema, Rajini holds Court, in what undoubtedly is his personal “Darbar.” There are the uncompromising slow motion fight scenes where antagonists come in bunches only to dispatched in multifariously unbelievable ways. Defying gravity they remain painfully suspended in thin air, before being ordered by their punisher to pay heed to the immutable laws of Physics. One of the highlights of the movie is a fight sequence in a railway station, the choreography of which is an exquisite paean to the charisma of Rajini. In more ways than one this is an age defying performance by the Superstar who at the time of this review is 70!

Although the introduction scene of Rajini takes on the contours of a by now expected panache, it is a tad bit weak by his own standards. A very clever and logical take on Rajini’s age is seen in the expectant albeit hesitant approaches made by Arunasalam towards Lily (Nayanthara). The crowning glory of the movie however is reserved for the interactions between Arunasalam and his daughter Valli (“Nivetha Thomas”).

Suniel Shetty as Hari Chopra is a looming Damocles Sword hovering over the head of Arunasalam. Considering the fact that he is making a comeback to the silver screen after a long hiatus, his role could have been meatier and substantial.

Nivetha Thomas as Valli holds her own in a performance that can only be termed brilliant. Effortless, effervescent and energetic, she is the most soothing foil to Arunasalam’ s raging temper. Yogi Babu as Kaushik is his usual natural self. Nayanthara plays the role of a charming and self-effacing woman who nurses an admiration for Arunasalam that goes beyond just camaraderie. However, her role is unfortunately one that just makes up the numbers.

Anirudh with his racy composition and an addictive background music proves why he is one of the most formidable young talents to be reckoned with in the musical world currently.  “Summa Kizhi” has all the hallmarks of a Rajini anthem. Santosh Sivan, with the free reign that he seems to have been accorded dishes out what is virtually a magical treat.

With the impudence of an Alex Pandian (coincidentally Murgadoss’s inspiration for this character), the impetuosity of a Petta and the inevitability of a Padayappa, Rajini reigns supreme as the Emperor of his Darbar. Even Manik Baasha would have approved of Aadithya Arunasalam, at least in so far as their methods of dispensing justice are concerned. But then again, I am not comparing.