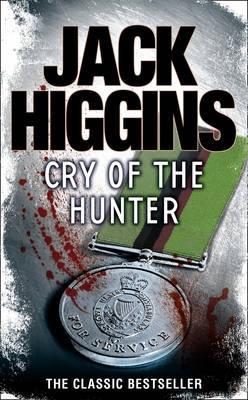 When Jack Higgins wrote “Cry of The Hunter” in 1960, it was under the pseudonym, Harry Patterson. Unfortunately, however this brilliant novel went out of print before it was thankfully and fortuitously revived by both the author and his publishers. And by doing this what a yeoman service they have done to the reading community at large! Cry of the Hunter happened to be the first of the Martin Fallon series of books that took the entire literary world by storm.

“Cry Of The Hunter” has the revered (by the Irish) and reviled (by the Ulster Constabulary), Martin Fallon come back out of a self-imposed retirement to attempt what has to be the most dangerous mission, even by his dangerous and fearful standards. A standard that has seen Fallon occupy nine years in prison, before which he saw himself fighting in his teens and assume leadership north of the border in his twenties.

His mendicant existence writing cheap books and consuming generous portions of Whiskey is abruptly terminated when his old mate O’ Hara manifests himself in his tranquil cottage along with a raw acquaintance named Doolan. A key member of the ‘Organisation’, Patrick Rogan has been captured by the police and unless he can be extricated from the hands of the police the future of the organisation is itself under stake. The irascible Rogan has threatened to turn turncoat in exchange for being offered a reprieve from the gallows.

How Fallon goes about this dangerous mission and whether he triumphs or fails forms the rest of this nerve racking story. Higgins the master story teller weaves a dexterous pattern that has its own inimitable repertoire of dazzling designs. Anger, love, comradeship, treachery and inevitability all fuse together to culminate in a crescendo that will leave the reader reeling!

Fallon’s man Friday Johnny Murphy a twenty-year-old effervescent boy, who is rooted to the cause of the organisation, and because of which he idol worships Fallon, has go down as one of the most indelible, enduring and endearing support characters in any work of thriller fiction. Anne Murray, Fallon’s benefactor and support system is a woman of substance, displaying both strength and vulnerability in equal measure.

“Cry Of The Hunter” – a master at his visceral best!