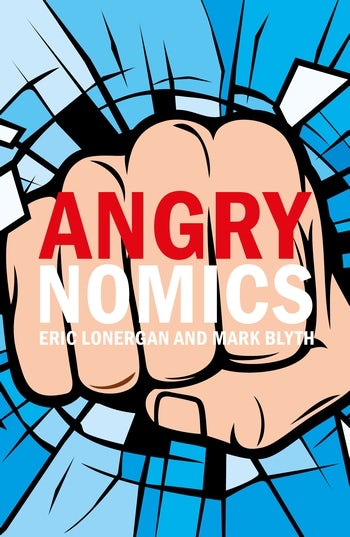 In a concise albeit compelling new book, imaginatively titled, “Angrynomics”, Eric Lonergan, a macro hedge fund manager, economist, and writer, joins forces with Mark Blyth, William R. Rhodes Professor of International Economics at Brown University, to dwell about a form of anger, a moral outrage even, that has currently enveloped the world brining about in its wake, changes and trajectories that are both undesirable and welcome.

The book is written in a unique manner. The primary essence of the work is captured and retold in the form of a measured, informed and nuanced deliberation between the authors themselves. They engage in a ‘Platoesque’ dialogue, bouncing off ideas, planting seeds of doubts, upending received wisdom, and all the while leading the reader towards a set of novel and ingenious ‘prescriptions.’

The duo at the beginning of their work distinguish between two types of anger, public and private. Public anger is a collective form of expressing an extreme emotion in response to an act that is perceived to be against the common good. For example, as the authors illustrate, the chagrin of the Icelanders when they found out after the infamous “Panama Papers” leak that their political elites were siphoning off money in caches to tax havens, provided a perfect example of a spontaneous exhibition of public anger. Private anger on the other hand, is one that is synonymous with shame. People who are privately angry are more in need of counselling than retribution. Stressed parents being a classic case in point.

Where the book gets very interesting is when the authors posit a more serious and venomous variant of anger – tribal rage. When public anger casts aside its moral outrage in a positive form and begins forming exclusive ranks and groups, it takes on a more dangerous and devious shape. Mostly seen in sports in the form of fanatical fan support, tribal rage manifests itself in the maniacal railings of fans, at times against their own teams, when the squad’s performance does not match the various expectations. But the biggest fall out of a tribal rage is its remorseless and deliberate exploitation by politicians of various divides, hues and colour to further their own interests, push their party’s ideologies and peddle otherwise unacceptable policies. The election of the maverick Donald Trump to the highest office in the most powerful nation of the world is a monumental testimony to the channeling of tribal rage to fuel personal aspirations. While the genuine woes of a neglected Rust Belt represented public anger and an honest moral outrage, Trump, in promising to alleviate the grievances of those affected, also pulled out a very dangerous tactic by foisting unverified and unwarranted blame on immigrants. This induced a wave of tribal rage across the country unleashing a false perception that immigration had a linear bearing on other economic and social distresses such as job losses, recession and a spurt in crime. Similar was the case with Cameron’s referendum and a tumultuous Brexit.

The authors bring the reader’s attention to the various ‘triggers’ that induce moral anger. First proposed by Martha Nussbaum, who in turn, relied on the works of the psychologist Carol Travis, moral anger is an outcome of perceptions such as ‘insults’, ‘slights’, ‘condescension’, ‘being treated as if I were of no account’ etc. These are exactly some of the myriad feelings which the common man experienced when subsequent to the Financial Recession of 2008, unscrupulous bankers and too-big-to-fail financial institutions were bailed out by Governments, whilst the ordinary citizen who was far removed from the scheming contrivances of Wall Street, was left holding the bag. “Not many people know the intricacies of the banking sector, but they do know when they are being ripped off. Whether it was the Tea Party movement in the US; outraged at capitalism for the people and socialism for banks, Los Indignatios in Spain protesting austerity cuts, or in the UK with Brexit, the crisis provoked a politics of anger that is now transforming politics everywhere.”

Personally, my favourite part of the book refers to the portion where Lonergan and Blyth employ an analogy of capitalism being like a computer that crashes from time to time and requires rebooting. The authors identify three versions of capitalism 1.0, 2.0 and 3.0. Without spoiling the pleasure of a fellow reader, I would let him/her be regaled by the authors themselves on the potentials and pitfalls of each version of the Capitalism Model. But as a juicy tidbit, the three versions in chronological order take the form of the postulations put forward by Karl Polanyi, John Maynard Keynes and Michal Kaleckirespectively.

With the world currently being ravaged by the COVID-19 pandemic and the lure of a vaccine still quite some time away, the micro and macro stressors that incite public anger and resentment are only bound to increase. The resonance of such an increase would be felt uniformly across the globe. For example, with the concept of social distancing more or less being a permanent facet in the lexicon of employment, the need for automation would only increase exponentially. Similarly, the gig economy would face a future that is uncertain, if downright, perilous. So are there measures that may be instituted to ameliorate the real uncertainties plaguing a majority of the global populace?

The authors, before concluding their book, offer a couple of innovative and out of the box suggestions for transferring cash directly into the hands of the deprived. The first of these “helicopter money” mechanisms involves the Government taking advantage of zero to negative interest rates. The authors propose the establishment of National Wealth Funds to tackle global inequality. Governments can issue a certain percentage of their Gross Domestic Product (GDP) in long term bonds at zero real interest rates. Hence after a few years, the real value of the debt would remain unchanged. If the relevant proceeds are invested in a diversified basket of global equities, the value of the assets would more than double in real terms over the same period. These proceeds may then be distributed in the form of individual trust funds to 80% of the households owning the fewest assets.

Another solution could be to extract a data dividend from the technology companies such as Google, Amazon, Apple and Facebook. Notwithstanding the issues of intrusion of privacy, these entities may be made to fork out a fee every time the data of a user is extracted and used. The payments can either be made in the form of a one-off royalty or a data license can be granted for 30 – 40 years on the same model as those that are currently being done for digital spectrum auctions. But what about those who do not use the internet? The authors do not address the issues that may arise as a result of cross subsidization and cream skimming.

“Angrynomics” is a very essential and relevant work especially considering the unprecedented times that we find ourselves in. It provides a very justifiable template for the public angst that is influencing global politics and also lays down a platform for utilizing such angst to achieve measures that are in the general interests of humanity.

(Angrynomics by Eric Lonergan and Mark Blyth an Agenda Publishing endeavour distributed by Columbia University Press in the USA and Canada will be published on the 30th of June, 2020)