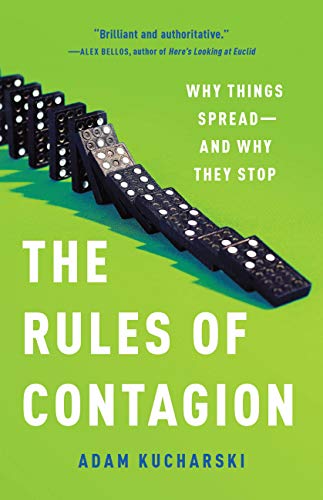 One of the most followed and admired epidemiological handles on Twitter is the one belonging to Adam Kucharski. A Mathematician, and Epidemiologist at The London School of Health and Tropical Medicine, Mr. Kucharski keeps his ‘followers’ informed, invested and entertained thereby allowing them to find their way through times unprecedented. One of his threads on the fundamentals of how a virus works has been the one of the most accessed on social media. Now Mr. Kucharski brings the same insights and information to bear in his authoritative new work, “Contagion.” A delight for the expert and the uninitiated alike, “Contagion” demonstrates with a pleasantly surprising verve, a myriad of linkages connecting the study of epidemics with other seemingly unrelated spheres such as gun violence, financial crisis etc.

As Mr. Kucharski points out, following the woeful financial crisis that rocked the world in 2008, central banks across the world, latching onto the repository of knowledge built upon the study of infectious diseases, homed in on the concept of networks. A structure of a network could amplify contagion. This was a theory pioneered by researchers engaged in the study of Sexually Transmitted Infections as far back as in the 1980s and 1990s. Similarly, notions such as the basic rate of reproduction or reproduction numbers are enabling researchers quantify the spread of innovations and online content.

Mr. Kucharski begins the book with a poignant personal reference. Struck down by Guillain-Barre Syndrome when still a toddler, the author completes a long and arduous path to recovery aided and abetted by a pair of resilient and resolute parents who keep reminding their son that GBS stands for ‘getting better slowly.’ Mr. Kucharski, in an eerie coincidence comes face to face with his old adversary after many years, when, in 2015, during a course of investigating a dengue fever epidemic in the Fijian Capital of Suva, he finds many patients afflicted by GBS. This endeavour results in the evaluation of surprising linkages between GBS syndrome and various other neurological ailments. As the COVID-19 epidemic of today is leaving the medical and the political community stumped with its mischief, so did the Zika virus with its shenanigans when it first struck. Mr. Kucharski requotes epidemiologist Laura Rodriguez in 2016, “rarely have scientists engaged with a new research agenda with such a sense of urgency, and from such a small knowledge base.” Since then as Mr. Kucharski illustrates, we have come a long way using welcome aids such as Information Technology and community outbreak research. “One of the best examples is the Nextstrain project, pioneered by computational biologists, Trevor Bedford and Richard Neher. This online platform automatically collates genetic sequences to show how different viruses are related and where they might have come from…Nextstrain has proved to be a powerful idea, not just because it brings together and viualises all the available sequences but because it’s separate from the slow and competitive process of publishing scientific papers.”

Mr. Kucharski keeps his narration riveting and shies away from employing technical jargon that might put the lay reader into a bind, if not a tizzy. Taking his readers through various epidemiological techniques employed by pioneers such as Sir Ronald Ross whose forays into the study of malaria are legendary, to the studies of William Kermack (who in 1924 was permanently blinded while working on a corrosive alkali solution in the Edinburgh’s Royal College of Physicians Laboratory) and Anderson McKendrick, Mr. Kucharski highlights the marvelous trajectory that epidemiological research has taken as time has evolved. Kermack and McKendrick evolved the Susceptible Infectious Recovered (“SIR”) Model, which postulates that for an outbreak to gain traction, three important factors are necessary: “a sufficiently infectious pathogen, plenty of interactions between different people, and enough of the population who are susceptible.”

Mr. Kucharski finds himself possessing two unusual and seemingly unconnected domains of expertise. Starting out his early career as an aspiring investment banker, he plied his trade with one of the financial institutions in Canary Wharf before the lure of epidemiology took over him. Hence he brings to bear this an invaluable two-pronged knowledge identifying unique connections between medical outbreaks and spreads of a non-medical nature, such as ideas. Referring to the 1962 work of Everett Rogers, “Diffusion of Innovations”, Mr. Kucharski informs us that four types of people are responsible for a product to become popular: “initial uptake comes from ‘innovators’, followed by ‘early adopters’, then the majority of the population and finally ‘laggards.”

As Mr. Kucharski holds forth, the economist Jean-Paul Rodrigue proposes dividing a financial bubble into four main stages. These stages bear an uncanny resemblance to an epidemic outbreak too. It all begins with the stealth phase, where specialist investors invest in a new idea. This is closely followed on its heels by the awareness phase, with a wider gamut of investor involvement. As and when the idea gains popularity and spreads fast, the media and the public drop their hats into the fray, driving the prices in only one direction – north. Finally, the bubble bursts, during the ‘blow off’ phase. Now compare this with the four phases of an outbreak: spark; growth; peak, and decline.

As the entire world is left to grapple with the consequences of COVID-19, one of the most, if not the most important facet associated with the management of the pandemic is reigning in its “reproduction number’ or ‘R Nought/Naught’. What exactly is this notion? Mr. Kucharski educates his readers on the work of Mathematician Klaus Dietz which resulted in the use and implementation of the R Nought. “R represented the number of new infections we’d expect a typical infectious person to generate on average…If R is below one, each infectious person will on average generate less than one additional infection….If R is above one, the level of infection will rise on average, creating the potential for a large epidemic.”

Drawing on the concept of R, Mr. Kucharski comes up with the acronym, ‘DOTS.’ DOTS stands for: duration of time a person is infectious; the average number of opportunities they have to spread the infection each day they are infectious; the probability an opportunity results in transmission; and the average susceptibility of the population.”

Mr. Kucharski relies on the work of the epidemiologist Sunetra Gupta in 1989 to correlate the dynamics of infection with a financial contagion. The spread of infections is dependent upon whether networks related to it are ‘assortative’ or ‘disassortative’ in nature. In the former, highly connected individuals are linked mostly to highly connected people. “This results in an outbreak that spreads quickly through these clusters of high-risk individuals, but struggles to reach the other, less connected parts of the network. However, in a disassortative network, high risk people are connected to low-risk ones, making the spread of the infection slower initially, but resulting in a larger overall epidemic. The banking network, according to Mr. Kucharski, turned out to be disassortative. This led to failed institutions such as Lehman Brothers spreading the contagion far and wide. Social contagion is also an interesting concept that has captured the imagination of the public at large. Physicians Nicholas Christakis and social scientist James Fowler’s famous, albeit controversial study on “The Spread of Obesity in a Large Social Network over 32 Years”, gets a special mention in Mr. Kucharski’s book.

“Contagion” abounds with interesting references such as the ones mentioned in the preceding paragraphs. Peculiar and asymmetrical patterns are dissected and social relationships analysed. In an interesting reference to “transmission of suicides”, Mr. Kucharski refers to a 1974 paper published by David Phillips examining media coverage of suicides. “He found that when British and American newspapers ran a front-page story about a suicide, the number of such deaths in the local area tended to increase immediately afterwards.” In fact, researchers in Columbia University found a 10 percent increase in suicides following the death of Hollywood actor Robin Williams.

The correlation between online platforms and biological occurrences can also be uncanny. Most of these platforms that are algorithm driven, feed on a self-perpetuating diet of undesirable viewing choices, pulling people further and further down what technology researcher Zeynep Tufekci terms an online rabbit hole. These algorithms draw people towards content that are more incendiary in general according to Ms. Tufekci. As Mr. Kucharski expounds, “the same situation arises in the biological world. Many species have to adapt simply to keep pace with their competitors. After humans came up with antibiotics to treat bacterial infections, some bacteria evolved to become resistant to common drugs. In response we turned to even stronger antibiotics. This put pressure on bacteria to evolve further. Treatments gradually became more extreme, just to have the same impact as lesser drugs did decades earlier. In biology this arms race is known as the ‘Red Queen effect’, after the character in Lewis Carroll’s Through the Looking-Glass….”

At the time of this writing, there seems to be a glimmer of hope in so far as the efforts to combat COVID-19 go. In a drug trial titled “Recovery” – an acronym for Randomised Evaluation of Covid-19 Therapy that was set up in nine days, and had recruited 11,500 Covid patients in 175 hospitals across the UK, it was revealed that Dexamethasone, an anti-inflammatory steroid which has been in use since the early 1960s has the potential to cut the risk of death for patients on a ventilator by a third, and for those on oxygen by a fifth. This has been the most welcome news in an otherwise depressing miasma of death and excruciatingly prolonged recoveries laced with lasting side effects. This refreshing piece of news bears monumental testimony to the indefatigable work of people such as Adam Kucharski and his ilk. A band of selfless virus hunters who have taken it upon themselves to make the world a happier, healthier and harmonious place to inhabit. And to their efforts, we remain eternally indebted.

(Contagion: Why Things Spread – and Why by Adam Kucharsky is published by Basic Books, an imprint of Perseus Books, a subsidiary of Hachette Book Group Inc and will be released on the 7th of July 2020.)