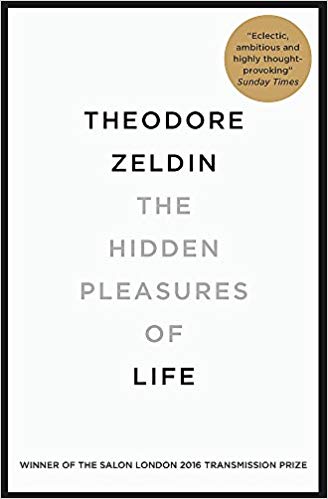 The 81 year old historian and philosopher Theodore Zeldin in a series of conversational essays, tackles head on the vicissitudes and woes faced by mankind during the course of living. This he does in an unconventional manner. Every Chapter in his book “The Hidden Pleasures of Life” begins with a probing and provocative question. Oscillating between the arcane and the obvious, it is as though Zeldin conceives each question after being racked by a bout of epiphany. One may also forgive the reader for harbouring a perception that Zeldin throughout the course of the book is zealously embarking on a quest to discover eternal serendipity and egging the reader on for company.

Some of the questions for which Zeldin tries to wean out introspective answers are:

What is a wasted life?
What can the poor tell the rich?
Is another kind of sexual revolution achievable? What is worth knowing?
What does it mean to be alive?
What can the rich teach the poor?
What is the point of working as hard as one is currently working?
What else can one do in a hotel?

In answering each of the questions, Zeldin takes inspiration from an eclectic mix of personalities, past, present and future. For example in a Chapter where Zeldin attempts to understand the intricacies surrounding stereotypical prejudices, he resorts to the life and works of the Nobel Laureate Rabindranath Tagore who aimed to destroy class conventions and caste hierarchies by establishing a non-conventional educational institution and naming it “Shantiniketan” or “The Abode of Peace”. The philosopher poet also spawned a cultural and social revolution through his works which had at its core bridging the schism of perception that separated the ways of the East from the Western style of living.

Similarly in a Chapter concentrating on the perils of ignorance, Zeldin quotes the example of the great and inveterate Iranian traveler of the 19th Century Hajj Sayyah who with a view to escaping a forced marriage, left home and explored myriad realms, kingdoms, Caliphates and countries, both accumulating and imparting wisdom during the course of his extraordinary circumlocution of the world. “The Hidden Pleasures of Life” spans cultures, seeks inspiration from sources both renowned and remote, and seeks to engage the reader in a honest quest for truth. A truth that would facilitate an escape from the mundane and the monotony that has almost come to represent the modern way of life. Zeldin’s “Hidden Pleasures” is more a plea to introspect than a run-of-the mill self-help manual that promises access to the Holy Grail in 21 easy to follow, practical to implement steps. More than proving solutions, Zeldin teaches exhorts us to pose the right questions. Questions which shape the very manner in which should live as opposed to how we desire and continue to live at present.

Zeldin has been termed the modern day Balzac. It is not surprising to understand why especially after grasping the unique mix of curiosity, concern, and clairvoyance permeating the pages in “The Hidden Pleasures of Life”