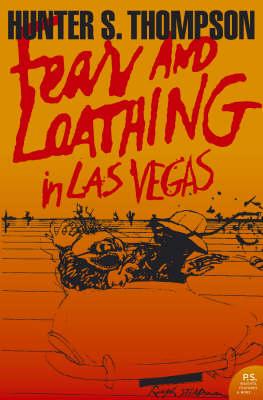 Ushering in the singularly unique style, jarring and abrasive style of Gonzo Journalism, “Fear and Loathing in Las Vegas” by Hunter S.Thompson is a seminal pop culture book that had reverberating ramifications when it first hit the book-stands. Thompson once said “I hate to advocate, drugs, alcohol, violence or insanity to anyone, but they’ve always worked for me”. Fear and Loathing in Las Vegas articulates and mirrors this philosophy in a manner that is at once unabashed and alarming. The genesis underlying the creation of this book lies in a curious assignment. A monetarily struggling author, Thompson accepted a $250 assignment from Sports Illustrated to cover Nevada’s Mint 400 Motorcycle race. Thompson invited his lawyer friend, a playwright, activist and a carefree drug abuser, Oscar ‘Zeta’ Acosta to be his partner in crime for this endeavour. What followed next was a frightening paroxysm of pure mayhem! Littering their path with Drugs, delinquencies and debauchery, Thompson and Acosta left a trail of veritable destruction in their wake. Their messy exploits while searching for the Real Deal occupies 204 pages of unbelievable meanness and gibberish.

The line between fact and fiction considerably thins before fading into sheer oblivion as alcohol is consumed irrationally, hallucinogenic substances consumed irresponsibly and convertibles are driven with loads of imbecility. The entire gist of the book can be encapsulated by a single passage that provides the laundry list of dangerous substances that are packed by the journalist and his intrepid lawyer in their car. “The trunk of the car looked like a mobile police narcotics lab. We had two bags of grass, seventy-five pellets of mescaline, five sheets of high-powered blotter acid, a salt shaker half full of cocaine, and a whole galaxy of multi-coloured uppers, downers, screamers, laughers….. and also a quart of tequila, a quart of rum, a case of Budweiser, a pint of raw ether, and two dozen amyls”. An inventory list which normally represents a straight ticket to either a penitentiary or a rehabilitation centre.

This riotous chemically-fuelled confrontational book while shocking and scandalizing the reader, also brings to the fore the misconceived, misunderstood, and misinterpreted version of the American “New Deal”. A New Deal that has at its edifice a crumbling foundation of values, a tottering tower of ethics and a failed sense of duty. “Fear and Loathing in Las Vegas” is not only an unbelievable rib-tickler sloshing with copious quantum of whiskey, rum and tequila, but also an eye opener to the direction in which the youth of a new generation are heading to.