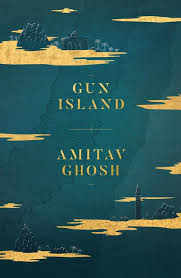 An antiquarian book dealer in Brooklyn, a Bengali folklore of a Merchant trying to escape the wrath of a Snake Goddess named Manasa Devi, an articulate and erudite Italian scholar trying to come to grips with a personal tragedy and a determined environmental activist steadfast in her resoluteness to save marine life from the dangerous effluents spewing out a refinery, all irrupt in a breathless, frenetic and rapturous manner in Amitav Ghosh’s latest thriller “Gun Island.”

Shades of “The Great Derangement” – Mr. Ghosh’s previous work of non-fiction dealing with the catastrophic consequences of Climate Change and its denial – unmistakably permeate the pages of Gun Island. Dinanath, a rare book dealer makes Brooklyn his home. Calling himself “Deen” a name that rolls off Yankee tongues with consummate ease, Dinanath balances his professional success with emotional hurdles by toggling between trading in stocks and talking to a therapist.

Deen’s life however takes a remarkable turn when on a visit back to Kolkata, he gets acquainted with the legend of “Bandooki Saudagar” (“Gun Merchant”). The Gun Merchant, after having fallen foul of the Goddess of Snakes, Manasa Devi circumambulates the world in a dire attempt to escape not just the vengeance of the Goddess but also her phalanx of reptilian horrors. This legend passed down through centuries piques the curiosity of Deen and he decides to be an intrepid explorer trying to get to the very bottom of the folklore. This endeavor takes him to the mangrove swamps of Sunderbans, transports him to the blazing forest fires of Los Angeles before culminating in a frenzied crescendo on the high seas leading to the shores of Venice.

A delectable mix of characters both assist and accost Deen as he plunges headlong into a journey interspersed with coincidences, imbued in myths and inundated by chances. Cinta, a well renowned, sophisticated and erudite Italian Professor, Piya, an energetic and ebullient Marine biologist who dearly loves dolphins and whales, and who in turn is loved by Deen, Rafi and Tipu two young Bengali youths who are both lovers and dream chasers are a few prominent examples.

Visitations from the dead, premonitions of the living and bizarre behaviours of animals all contrive to produce an unalloyed chaos into whose very eye Deen gets sucked into. But at the very epicenter of Deen’s experiences and enervations lie Mr. Ghosh’s pet topic of Climate Change. Exhibiting a usual aplomb that is reserved for dealing with this seminal issue, Mr. Ghosh lays out before us the devastating consequences of rising tides, riotous cyclones and rampaging refugee crises. A degradation in the environment has the dangerous potential to birth fissures that transcend the mere ecology to cover social, cultural and political aspects of our existence. Internecine conflicts, xenophobia, intransigent politics and insouciant policies can all be a direct offshoot of an untrammeled trample of Nature.

Mr. Ghosh’s book goes beyond empty rhetoric and enthusiastic pabulum. Instead it serves as a medium for expounding on one issue, which arguably is one that has spawned a vertical divide for and against it. On either side of the yawning chasm stand self-proclaimed and universally acknowledged experts, academicians of stirring repute and suspect credentials, activists of various hues and cries, and specialized bodies that are both revered and reviled. When an emotional Piya sheds unabashed tears upon seeing a bunch of Irrawady dolphins incredulously beaching themselves, she in her moment of lament rends asunder the veil of complacency and callousness that fails to acknowledge and admit that a failure to protect our climate is a failure to preserve our culture.

“Gun Island” has its fair share of outlandish coincidences, garish escapades and predictable encounters with the supernatural. But every masterly crafted surprise, shock and serendipity is nothing but a vehicle that transports the engrossed reader towards an inescapable eschatology. An eschatology that transcends religion, race, caste, creed and colour to encompass within its confines an urgent need to undertake an introspection to ultimately resolve an existential crisis.

In an interview published in Arts & Culture, Ghosh told his interviewer: “Well, I don’t actually think you can write a novel to an agenda; writing is more complicated than that – if the story doesn’t come alive in your mind then it doesn’t live. You can’t write a novel with a didactic intent because it will have the opposite effect. What I would say is that Gun Island has all my passions, interests and obsessions within its pages. Virtually everything I’ve written has been about people moving, migrating, carried away from one place to another. I’ve always written about natural environments and engagements with animals going right back to the elephants in The Glass Palace. And yet it’s very different to anything I’ve done before.”

However, “Gun Island” is more didactic (encouragingly) than dystopian. It is also a compelling clarion call for humanity to get its act right sooner rather than later before the baby also gets thrown out along with the bathwater.