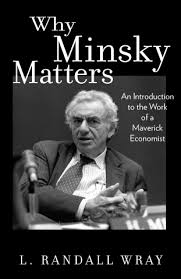 The late Hyman Minsky once said, “[A] fundamental flaw exists in an economy with capitalist financial institutions, for no matter how ingenious and perceptive Central Bankers may be, the speculative and innovative elements of capitalism will eventually lead to financial usages and relations that are conducive to instability”. It were these very speculative and innovative elements of capitalism that ran riot in 2007 before unleashing upon an unsuspecting world, the biggest Global Financial Crisis since the Great Depression of 1929. When the calamitous winds of the Recession began to buffet the world, many Economists claimed that this was a “Minsky Moment”. In this authentically interesting book, Randall Wray brings to light the prescience and philosophy of Hyman Minsky, a maverick Economist whose postulations were lost on the world before resurrecting with great vigour and relevance, courtesy the Global Financial Crisis.

Wray, who at one point was a Teaching Assistant of Hyman Minsky, elaborates in a very clear, lucid and understandable language, the key postulates of Minsky who argued that if ever the advocates of Adam Smith’s ‘Invisible Hand’ were to be successful in achieving equilibrium, those internal dynamics that worked to bring about such an equilibrium would push the economy away towards a state of destabilization. In other words stability is destabilizing! The primary trigger for an equilibrium to disintegrate according to Minsky was a tendency to adopt reckless behaviour and engage in dangerous risky transactions. This tendency is further bolstered by the assurance that the Government would stand behind the Too Big To Fail institutions thereby establishing an insidious element of moral hazard.

Wray also interprets for the reader, Minsky’s famous Financial Instability Hypothesis (“FIH”) where Minsky adds the “financial theory of investment” to John Maynard Keynes’ “investment theory of the cycle”. However the most important and engaging aspect of the book is the chapter where Wray elucidates Minsky’s notion of the Government acting as an Employer of Last Resort in the same manner as the Central Bank chooses to execute its role as a Lender of Last Resort. Minsky’s views on employment creation first took shape and root when he was at Berkeley and Minsky’s opinion was an alternative to the War On Poverty (“WOP”) measures initiated by both the Kennedy and Johnson Administrations. Minsky advocated maintenance of full employment and reduction of poverty rather than introducing schemes up-scaling skills and training aspirants to assimilate more complicated and sophisticated technical practices.

Minsky also famously reiterated that there were 57 different forms of capitalism. The capitalism that was prevalent when the Global Financial Crisis rolled over us was the money manager capitalism, a capitalism that lead to ‘financialisation’ and layering of debt on debt on debt. As one more of Minsky’s bold utterances go, “anything that can be securitized will be securitized”. Minsky was more a fan of relationship banking rather than the mushrooming growth and permeation of shadow banking. In a prescient tone, Minsky warned the regulators about the dangerously disturbing trend of deregulation and non supervision of the balance sheets of behemoth banks. This timely warning that went unheeded, consequently resulted in banks accumulating esoteric ‘trash’ assets on their balance sheets, packaging them into further tradeable securities and passing over the liabilities to numerous other financial institutions. When as a result of the sub prime mortgage crisis, the initial defaults materialised, there arose the inevitable domino effect which brought the world’s financial machinery to a chillingly abrupt halt.

There were very few people who were able to predict the impact of imprudent banking practices upon the global economy. A handful of those who voiced their concern were ignored as insignificant Prophets of Doom. Hyman Minsky was a level above even such Prophets. He was a visionary who foresaw greed overtaking generosity and unscrupulous practices trump utilitarianism. He was also a brilliant Economist whose value (as is usually the case) was realised and appreciated much too later in hindsight.