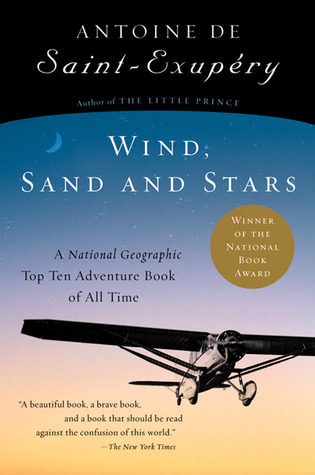 Winner of the Grand Prix of the Academie Francaise, Wind, Sand and Stars is universally acknowledged as one of the most popular books on flying. However to cloister this indispensable Palmarium within the narrow confines of aviation would tantamount to causing absolute injustice, for Exupery’s work is a book on courage, confidence, catharsis and above all a memorable exploration of the very essence of being alive.

In 1926, Antoine de Saint-Exupery enrolled himself as a student airline pilot with the Latecoere Company, the pre-cursor to Aeropostale (now Air France). He was entrusted with the operation of the line between Tolouse in Southwestern France, and Dakar, in then French West Africa. Exupery chronicles in precise detail and perfect verve, his experiences as an airline pilot responsible for carrying passengers and air mail over skies that are at times benevolent and at others brooding; over mountains that are at once malevolent and magnificent and over landscapes barren and breathtaking. Exupery’s respect and reverence for the predictable performance of his craft as well as the unpredictable behavior of the elements of Nature forms the crux and core of the book. Even when being buffeted against raging storm winds and being tossed around in his flight like a ragged doll, Exupery neither traduces the gale force winds nor tamely surrenders to its treacherous demands. He just flies his conveyance in a matter of fact manner riding what he views as a temporary discomfiture – an elongated hiccup almost!

Exupery during the course of his tryst with the Latecoere Company was exposed not only to awe inspiring wonders of nature but also to the anguish and agony of humanity. These were the times when slavery was still an acceptable societal more and the story of a slave commonly known as Bark who was until his paid release (courtesy of Exupery and his friends magnanimity) in the captivity of the nomadic Moors, makes for some introspective, beautiful and rejoicing reading. Freedom we understand is not merely the release from physical chains but the very unshackling of a desolate soul struggling to find its deserved place under the rays of a bright and radiant sun.

Exupery instills in the reader an encouraging faith in humanity and a perennial belief in hope by recounting his near death experience following a crash that found Exupery and his navigator Prevot in the middle of a vast and scorching African desert. Lack of water and food, exhaustion, the outcome of mindless wandering, myriad mirages, a combination of heat and hunger, all but made certain that the two aviators would soon mingle in body, soul and spirit with the sands of the desert in the perennial sleep of life. The miraculous appearance of two inquisitive Bedouins however ensured that the contrivance of fate had kept the Grim Reaper at bay.

Wind, Sand and Stars is a book of hope, humility and humanity. It is a tribute to the ceaseless symbiosis between Man and Nature; life and death; and agony and ecstasy. It is Exupery’s amazement at both the constructive and destructive facets of mankind, as what has been painstakingly nurtured by a pair of hands comes for some wanton destruction by yet another pair of identical hands. It is a precious lesson for all homo sapiens to view with benediction what they have been bestowed with – a chance opportunity to experience life in a wide expanse termed Planet Earth.

On the 31st of July, 1944, Antoine de Saint Exupery took off in an unarmed P-38 on his ninth reconnaissance mission from an airbase on Corsica. To the great consternation of the squadron compatriots who revered him, he did not return, dramatically vanishing without a trace. The wind, sand and stars which was so dear to this magnificent literary genius had claimed him for their own deciding that he was now for and of the elements. Exupery met his end doing what he loved doing the most – sailing serenely, with the skies above, the sea below and the wind all around him for tranquil company. But not before imparting to us a few invaluable, indelible and inextinguishable tenets of life.