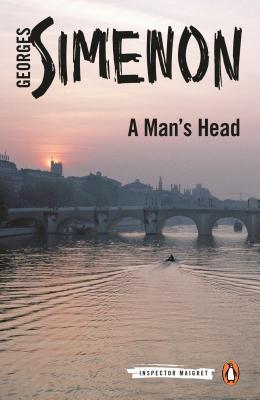 “When a bell somewhere rang twice, the prisoner was sitting on his bunk with his two large hands clasped about his folded knees. For the space of perhaps a minute he did not move, as if suspended in time; then with a sudden release of breath, he stretched his arms and legs and stood up in his cell, a huge man, ungainly, his head too big, his arms too long and his chest hollow.” Thus begins what must be one of the most enduring, endearing and indelible murder mysteries ever penned in the annals of fiction. “A Man’s Head” by the peerless Georges Simenon, has its brooding, introspecting, constantly pipe-smoking protagonist Detective Inspector Jules Maigret facing a challenge bearing a singularly peculiar disposition.

Joseph Heurtin, 27 is arrested and convicted of a gruesome double murder. Mrs. Henderson, a rich American widow and her French maid are found dead in their sprawling mansion under horrific circumstances. The murderer has resorted to stabbing each woman more than a dozen times. Tell-tale clues such as fingerprints, imprinted boot-marks all converge and lead to the detention of Heurtin. However, as the day of the impending execution of the prisoner nears, Inspector Maigret is racked by guilt and a gnawing conviction that Heurtin is either ‘insane or innocent’ but certainly not a murderer. A protracted degree of pleas, arguments and commitments later, an audacious plan is hatched by Maigret with the blessings of the examining Magistrate Monsieur Comeliau, to smuggle Heurtin from his cell. The expectation being, the ‘falsely’ accused criminal would either lead the Detective to the actual criminal or Maigret’s exercise would turn out to be one in misplaced confidence, in which case, Heurtin would be hauled in again and guillotined.

However, things take a nasty and dangerous turn when, after attacking a cop tailing him, with a soda siphon, Heurtin gives Maigret and company the slip and vanishes into the teeming, bustling and heaving mass of humanity in Paris. Further complications manifest themselves in the form of a Czech immigrant named Radek. Portraying a Bacchanalian attitude, Radek although looking like a tramp in his detestable appearance, possesses a razor sharp intelligence which could either improve or impair Maigret’s chances of getting at Heurtin. Then there is the Bohemian nephew of the murdered widow, William Crosby. Always in the company of his wife Madame Crosby or Edna, and his mistress, Edna Reichberg, a Swede, Bill Crosby further adds to the existing flies in Maigret’s metaphorical ointments.

Whether Maigret succeeds in collaring the killer? Or does he pay a hefty price for what ultimately would turn out to be a daft and indiscreet move in the form of protecting a murderous human being from deserved execution?

As with all other books in the Inspector Maigret series, “A Man’s Head” is an absolutely racy one-sitting read. Bewitching, mesmerizing and gripping, Simenon does not lose his reader’s attention even for a micro second. Every word, phrase and sentence is loaded with essence and is inextricably linked to the plot. The characters, littered across pages and chapters in a random scatter graph pattern all converge together in a crescendo at the end, thereby contributing to an explosive climax. But what strikes the reader most vividly is the powerful narration employed by this genius of an author. One of the most memorable cachet of Simenon is his ability to lend what must be the most uncannily appropriate description of each of his characters. In writing about Radek for example, Simenon hold forth: “The mop of red hair struck a note of international bohemian nonconformity, which was reinforced by a shirt with a very low one-piece collar, dark in colour and worn with no tie.” Or take the case of the ever agitated and troubled disposition of Monsieur Comeliau: “Monsieur Coméliau was at his most inflexible and vehement. Thin, excitable and tense, the examining magistrate was pacing up and down in his office. He spoke so loudly that remand prisoners who were waiting in the corridor to be seen must have overheard snatches of what he was saying.”

Simenon also excels in detailing out in exquisite detail the nefarious underbelly of Paris which regurgitates squalor and detritus. The relevance and contribution of the Seine along the length of which life and living sprouts in a kaleidoscopic variety, is also brought to the reader in full force. The barges and cafes, inns and bars that are heaving, throbbing and pulsating with the paradox of wastrels and wisdom provides a great insight into the dark side of one of the world’s most exotic and esoteric capitals. “And Maigret spent an hour after his own heart, snugly ensconced in a corner of the cab, whose windows were splashed with rain and misty from the warmth inside. He smoked incessantly, warmly wrapped in the enormous overcoat that had become a byword on the Quai des Orfevres. The suburbs of Paris glided by, then the October country. Sometimes a drab band of river came into view between the gables of houses and the bare trees.”

The boisterous story of the curmudgeon Maigret as he goes about his business is an absolute delight to sample. Brash, brusque and tolerating no nonsense, the man instills apprehension and fear even into his own colleagues, let alone the targets he pursues. But more than anything else he harbours an iron will to ensure that no one finds himself or herself on the wrong end of justice.

“A Man’s Head” – Georges Simenon at his wickedly best!