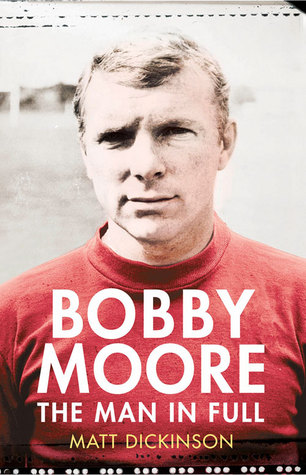 In this haunting biography, Matt Dickinson strives to dig deep into the almost reclusive life of one of England and West Ham United’s greatest football legends. The England World Cup winning Captain and a defender par excellence has been surrounded by a halo of enigma which has made his personality complex and secretive.

A man of few words, Moore was impeccable in his conduct both on and off the field lending a plethora of adoring fans to associate their hero with a dour but definite dignity. But was there more to the man who imperious statue adorns the hallowed portals of Wembley? In the course of finding answers to unraveling the mystique and mystery behind the man that was Bobby Moore, Matt Dickinson comes up with a few surprising and strange revelations. Moore’s unquenchable penchant for the bottle, his estranged but under wraps relationships with West Ham Manager Ron Greenwood and the immortal Sir Alf Ramsey, a failed hospitality venture with Sir Sean Connery and an almost fructified Manager deal for Watford at the behest of Sir Elton John all come together in this fast paced, extremely readable but controversial biography.

But the most striking aspect of the book is the description of a deplorable degree of intransigence exhibited by the English Football Association towards the players who were instrumental in delivering the only World Cup in the footballing history of the nation. A reprehensible neglect of the heroes 1966 was only rectified and the shame redeemed (to an extent) with the emerging boom of the glorified English Premier League. Bobby Moore in fact was once ousted from Upton Park where West Ham were hosting their opponents, on the grounds that the former silverware winning captain of the Club did not possess a ticket! This after having ended a glorious career at West Ham United spanning over 645 games for the hammers.

Moore’s epitome of composure never wavered even when he was initially diagnosed with testicular cancer and subsequently with a fateful bowel cancer to which he succumbed after manfully waging a stoic battle. The great Pele once termed Moore the best defender that he had played against and the Englishman bought to the fore the same qualities of redoubtable determination and spirit even while battling the dreaded terminal disease.

Bobby Moore was lost to the world prematurely when he was a mere 51 years old. However his exploits, enthusiasm and most importantly his supreme professional ethic and behavioral conduct has ensured that the man remains an indelible legend till time immemorial.