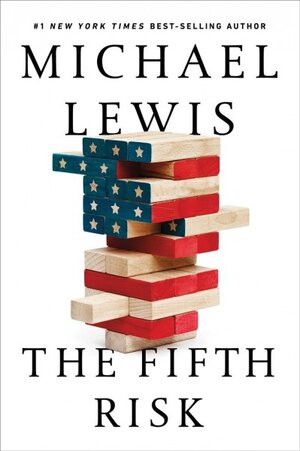 If Michael Lewis was to pen a 1,000 pager on the philosophical disposition of ants, that treatise would undoubtedly stand on top of the bestseller pile. Ushering in an Avant garde style of writing that has technology for a back bone, intuition for a brain and an indomitable imprimatur that breathes life into the overall structure, this phenomenal author has regaled his audience repeatedly over the course of many years. While his latest book “The Fifth Risk” (“the book”) is no exception, it however marks a significant departure from his erstwhile books. This book is an exception in spite of not being one! “The Fifth Risk” is a paean to the unsung, a deification of the unseen and a tribute to the unassuming. These stellar characters comprise the multitude of non-decrepit men and women who form an integral part of the American federal work force. It is this very bunch of selfless heroes who have been totally neglected by the Trump administration.

Focusing on three obscure Government agencies, the Department of Energy, the Department of Agriculture and the Department of Commerce, Lewis elects to elevate (deservingly so) the bureaucrats working tirelessly to ensure that the American populace lead a life of relative comfort and safety. The raison d’être characterizing the selection of these three departments is a reason that is extraordinarily close to Lewis’ heart – a relentless churning of an improbable quantity of humongous data. It is the effort of these indomitable yet isolated soldiers that Lewis intends to celebrate when he states, “We don’t really celebrate the accomplishments of government employees They exist in our society to take the blame.”

At the core and crux of this page turner is the ridiculous transition period (or an utter disregard of the same by Messrs. Trump and Co) between the controversial 2016 election and President Trump’s inauguration. It is common knowledge and a statutory necessity that every outgoing administration assists the incoming party prepare to understand the at times mystical workings of a myriad departments, agencies and functions of government. While true to this tenet, the Obama administration spent invaluable time preparing exhaustive briefing books and presentations for their successors, irrespective of the party to which they belonged, the bureaucrats were in for a rude shock. The successors just refused to turn up! Paraphrasing a former top official in the Energy Department “We had tried desperately to prepare them, but that required them to show up. And bring qualified people. But they didn’t.”  A gob smacking lapse considering the nuances and intricacies involved in manning and running these departments. John MacWilliams, a former investment banker turned Energy sector expert who was initially goaded by Obama to make the Department of Energy his home, elucidates in a matter of fact manner, the complicated rubric that runs throughout the Department. “Everything was acronyms, I understood 20 to 30 percent of what people were talking about. There were physicists everywhere. Guys whose ties don’t match their suits. Passive nerds. Guys who build bridges.”

When the Trump administration finally showed up, it was an unparalleled exhibition of utter disaster. Not possessing the requisite security clearances, some of the Trump officials displayed blatant disinterest and flagrant disregard. For example, the U.S. Department of Agriculture staffers had prepared 2,300 pages of materials, but the Republican staffers failed to show up until a month after the election, and when they showed up, they were just HIM – yes just a solitary individual. Demonstrating a blatant and myopic ideology, the Trump administration queried the Energy Department for lists of staffers who had worked on climate change, or going one regressive step further, instructing the USDA to stop using the term “climate change” altogether.

This lackadaisical attitude has resulted in an intolerable and undesirable disruption in the hitherto smooth working of the important Government machineries. As Lewis emphasizes, “Some of the things any incoming president should worry about are fast-moving: pandemics, hurricanes, terrorist attacks, but most are not. Most are like bombs with very long fuses that, in the distant future, when the fuse reaches the bomb, might or might not explode.”

In fact, it might have been a blessing in disguise if the Trump “landing teams” had failed to put in an appearance. When the President elect’s team finally turned up, it was for the worse. Donald Trump appointed the former Texas governor Rick Perry as energy secretary. The vituperative Perry, who once said he wanted to abolish the Energy department (he also wanted to abolish Commerce and Education), didn’t ask for a briefing on any D.O.E. program when he arrived. The de facto and de jure person in charge was Thomas Pyle, a lobbyist funded by the epitome of capitalism Koch Industries and the beachhead of the oil and gas industry, ExxonMobil. Tarak Shah, chief of staff for the department’s $6 billion basic-science program says “We had tried desperately to prepare them … but that required them to show up. And bring qualified people. But they didn’t. They didn’t ask for even an introductory briefing. Like, ‘What do you do?’”

“The Fifth Risk” is a study in contrasts. On one end of the administrative continuum, we have the likes of Kathy Sullivan, a geologist and astronaut (the first American woman to walk in space) who was in charge of the National Oceanic and Atmospheric Administration and whose endeavors included repairing NOAA’s polar-satellites program as well as studying how people can better respond to weather emergency notifications — thereby boosting their chances of survival. On the other extreme end of a continuum, there is the lethargic Trump administration rooted in ignorance and reeking with arrogance. As Lewis summarises, “If you want to preserve your personal immunity to the hard problems, it’s better never to really understand those problems, there is an upside to ignorance, and a downside to knowledge. Knowledge makes life messier.”

“The Fifth Risk” is a rousing story of an unfortunate disconnect between honesty and haughtiness. It is also the chronicle of a discord that has at its edifice the very future of a population constituting the largest democracy on the Planet. More than everything else it is a brilliant demonstration of the obnoxious trajectory that an ideological administration is set upon to the overall detriment of an entire nation. The entire book can be encapsulated in a paragraph where a visibly upset and raging Trump goes ballistic upon being informed that his transition planners were raising funds to pay for staff. “You’re stealing my money! You’re stealing my f—ing money!” Trump screamed at a befuddled and bemused Chris Christie.

Yes, there has been a theft. But as Lewis brilliantly illustrates, it has been a theft of confidence, a pillaging of conviction and a pilfering of caution. Right now American democracy is unfortunately deemed by a prejudiced Trump leadership to be one, by the ignorant, for the ignorant and of the ignorant.