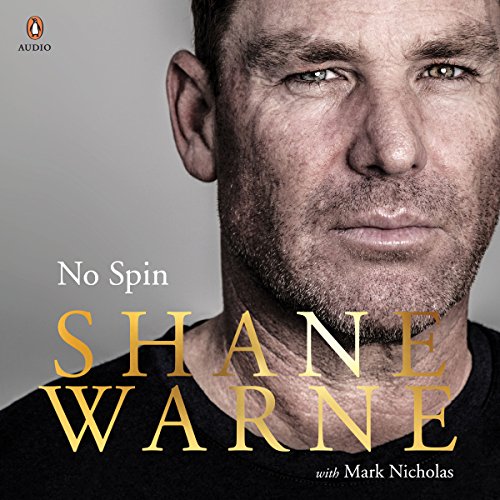 Shane Keith Warne’s only approach towards the game of cricket was one rooted in intensity. An approach that never took any prisoners and brooked no opposition. An aggressive in-your-face, no holds barred attitude, which more likely than not, won a multitude of games for Australia, some of which literally involved wresting victory from the gaping jaws of defeat! It is this same barn burning tactic which the ‘Sultan of Spin’ brings to the fore in his recent offering, an autobiography that is unsurprisingly titled, “No Spin”. Written along with the redoubtable Mark Nicholas, “No Spin” (“the book”) is explosive, energetic and in more passages than some, extraordinary.

Unashamed in content and unsparing in context, Shane Warne’s memoir is to put it mildly – an eclectic collection of exploits and eccentricities. Delectable on-field performances clash with deplorable off the field adventures, (misadventures rather), as Warne strives to lay bare the various nuances which both constitutes his persona and makes it tick. Whether it be the magic ‘ball of the century’ which heralded the entry into the cricketing world, of the greatest leg spinner (or arguably even bowler) in the history of the game – but not before leaving Mike Gatting in a shambolic state of befuddlement – or an immoral tryst that involved two women and an inflatable sex toy (yes you read that right), Shane Warne’s life has been a roller coaster saga whose sweep has been unbelievably broad to embrace within its ambit the admirable and the abominable. The awe-inspiring magician who could change the course of any form of the game with an unparalleled sleight of hand could also be a naive man who was forced to miss a World Cup for his country after swallowing a diuretic, courtesy the educated recommendation of his mother!

(Shane Warne, Mike Gatting an the Ball Of The Century)

Mark Nicholas and Shane Warne take on in an uninhibited manner the task of reconciling the very cleave which, while lending an aura of invincibility to Warne the cricketer, also births an attribute of vulnerability, in Warne, the human being. The Monarch of all he surveys within and around the twenty-two yards of many a hallowed cricketing turfs across the world is reduced to remaining a torn individual racked by a plethora of emotions outside of the playing arena.

The inimitable and abrasive personality of Shane Warne, inevitably results not just in differences of opinion but also in simmering feuds. Shane Warne, in his book reignites one such feud and reopens an old wound that has at its center piece the former Australian skipper, Steve Waugh. Slamming Waugh for an attitude that Warne perceives to be self-centered, Warne ensures that no punches are held back as he launches into a blistering tirade against his former team mate. “Steve Waugh was the most selfish player I ever played with and was only worried about averaging 50. It was about a lack of loyalty. Pretty childish, I know, but that’s the way it was.” Recalling an incident where Waugh dropped Shane Warne from the playing XI against the West Indies contrary to accepted wisdom, Warne holds forth, “Disappointed is not a strong enough word. When the crunch came Tugga didn’t support me, and I felt so totally let down by someone who I had supported big time and was also a good friend. I lost a bit of respect for him after that. I believe he should have backed me — as I always believe the art of captaincy is to support your players and back them every time. This gains the respect from the players and makes them play for you. He didn’t, it’s history, but I never found it easy with him after that.”

Former Australian Coach John Buchanan also comes in for some criticism, especially in relation to his unconventional methods of coaching that involved reading excerpts from Sun Tzu’s “Art Of War”, going on remorseless boot camps and waking up in the middle of the night to the sound of simulated explosives to belt the “Underneath The Southern Cross” at full volume.

Warne also is refreshingly open about his obsession towards cigarettes and a predilection to alcohol. “Ten Vodka/Red Bulls and 50 darts” represent a night well spent. A few facts about Warne that has not made the rounds in the public domain in general, and outside Australia in particular, get deserving mention in the book. For example, many of Warne’s fan and followers would be pleasantly surprised to note that this legendary leg-spinner is the first man to have got a hole in one with the pin in the back right position at the Augusta Masters. Also the fact that Warne was a talented Australian Rules Football player having clocked in regular games for his beloved club St Kilda is a fact that has been obfuscated to a great extent by his overwhelming exploits with a cricket ball in hand. The book also has its share of wicked wit. A photograph that has Warne turning over his arm under the eagle eyed tutelage of Terry Jenner bears the caption, “with Terry Jenner, the teacher. John Buchanan is in the background, where he should have been more often.”Typical, indomitable Shane Warne!

The author Scott G. Fitzgerald once said, “personality is an unbroken series of successful gestures.” However, in the case of Shane Warne, one of the greatest ever sporting legends of any generation, personality has been an unbroken series of gestures, not necessarily successful. This man’s gestures have alternated between spontaneity and confidence, oscillated between gestures of conviction and indiscretion. Nevertheless, they have been gestures animated by freedom and exemplified by naturalness. The gestures fizz with the same verve which induced the fear of the devil in every batsmen as they watched with impending doom the breathtaking trajectory of the ball leaving the conjurer’s hand. In the same way as there was no knowing what would happen to either the delivery or the prospects of the batsman facing up to it, this remarkable human being’s gestures do not lend themselves to prediction.

That’s exactly how it ought to be! For Shane Keith Warne, both cricket and life are tenets of glorious uncertainties!