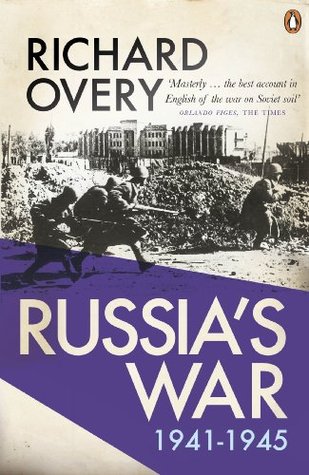 Professor Richard Overy in this eye opener, details the gargantuan Soviet effort in amassing men and material, which on hindsight turned out to be the most colossal feat of World War II. From the very brink of humiliating defeat after being taken unawares of the German Blitzkrieg – courtesy Operation Barbarossa – to hoisting the Communist Flag at the Reich stag in Berlin, Russia overcame obstacles of every sort, both natural and man made; posed by friend and foe alike to emerge triumphant in some of the bloodiest battles of attrition. When the fighters and bombers finally stopped their savage sorties and the lumbering monstrous tanks ground to a halt, signaling the end of the greatest incursion of mankind into the depths of folly, the casualties suffered by Stalin’s countrymen were mind numbing. Out of a total mobilized manpower of 34,476,700, 11,444,100 were either dead or were captured as Prisoners Of War or were missing in action. The total number killed in action, or who perished on account of their injuries was 6,885,100. The death toll from 1941-1945 amounted to 8,668,400. An unspeakable price to pay for securing freedom.

Overy by concentrating on the physical as well as the psychological factors motivating the Russian War efforts provides various astounding insights which when read together, brings the reader to the startling and sickening realization that the Russian victory could have been achieved at a much lower loss of life, limb and livelihood. For example the atrocious ‘purges’ following the internal civil war in 1919, where a paranoid administration went about culling ‘suspected’ traitors from the officer corps – not before subjecting them to unspeakable bouts of torture with a view to forcing out ‘confessions’ – ensured that by the time Hitler mounted his rampaging attack on June 22, 1941, the Soviet army was in virtual disarray with a grievous lack of leadership capabilities. These abominable purges continued well into the war and even after the World War itself came to an excruciating end. Having a morbid fear of dying, the despotic Stalin not only had himself surrounded by the dreaded NKVD Security guards, but also had a phalanx of cronies and lackeys, who with an objective of scaling great heights of power, committed treachery and treason against their own brethren.

Professor Overy also highlights the alarming situation of the Soviet ground and air troops itself at the height of the German invasion. Forced to fight behind feeble emplacements and substandard fortifications, the Russian soldier – or ‘Ivan’ as the Germans were wont to term him – was equipped with outdated rifles and inferior weaponry. Against the clockwork precision of the German army equipped with the dreaded Panzer tanks, these pitiful soldiers had only prayers as their best chance of survival. The Russian Air Force was in an even greater mess. Lacking radio communications and trained/experienced pilots, the Soviet air attacks were literally suicidal missions with their planes seeking to ram into the dreaded Luftwaffe when the former ran out of fuel!

From a position of dire disadvantage, the Soviet Union through a process of remarkable political, economic and military transformation, worked a veritable miracle by bringing forth a level of discipline and sophistication hitherto seen in any Armed forces. Even as Germany was bombing the living daylights out of Russian villages and cities, workers transported entire factories over railroads (or what remained of them) to isolated places in Kazakhstan and Siberia and embarked on a mass production initiative of military stockpile. However the most back breaking labour was extracted at an unfair cost. Most of the toil formed the exclusive preserve of the unfortunate prisoners sentenced to a long tenures at the ‘gulags’ or the despicable labour camps. Sleeping on straw beds or even at times, in holes carved out from earth, these prisoners were driven to work in appalling conditions. Braving temperatures of minus thirty degrees and minuscule food rations, hundreds of thousands of brave men and women literally worked themselves to death. By 1945 the Soviet Armed and Air forces boasted technological prowess that was equal to or in some cases even superior to those possessed by their enemy.

The top political echelons also underwent a positive paradigm shift in mindset. Stalin left the dynamics of strategy in the hands of extraordinarily brave and capable generals such as Georgy Zhukov (the hero of both Stalingrad and Leningrad); Vasily Ivanovic Chuikov, the indomitable general who was wounded four times (each time on the 20th of a month) and yet refused to back down an inch, and Konstantin Konstantinovic Rokossovsky. Even though Stalin insisted on being the ultimate Generalissimo, he rarely interfered in the carefully chalked out battle strategies formulated by his generals. This was in direct contrast to the workings of the sociopath Hitler, who insisted on micro managing every front, a disastrous decision which as psychotic as the man’s ambitions, and which ultimately led to the decimation of the Third Reich.

“Russia’s War” is an essential accompaniment for understanding not only the noble sacrifices made by millions of patriotic men and women who uncomplainingly charged the enemy and laid down their lives for their Motherland, but also to fathom the very depths of human blunders which have the capability of triggering a damning catastrophe! Russia’s War was indeed a consequence of a monumental catastrophe!