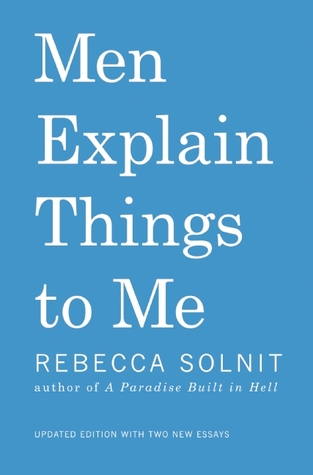 In the year 2006, activist and sexual harassment survivor Tanana Burke took to Myspace, an American social networking website, for empowering vulnerable women, especially from low wealth communities. Ms. Burke pioneered a ‘culturally informed’ curriculum to discuss sexual violence within the Black community and in society at large. For furthering such an endeavor, she employed the hash tag #MeToo. What began as a hesitant effort soon spawned into a gargantuan movement that had at its core the egalitarian right of every woman in society. The #MeToo movement reached its apogee in early October 2017 following the widespread sexual-abuse allegations against former American film producer Harvey Weinstein.

The towering voice and influential writings of Rebecca Solnit, have arguably done more for embellishing feminism, than can possibly be either envisaged or imagined. Monumental testimony to this fact is her scintillating and irascible work, titled, “Men Explain Things To Me.” This staid, non-decrepit and matter-of-fact sounding heading takes on a more derisive and deprecatory tinge once the content within the covers have been assimilated by the reader. If Ms. Solnit’s objective is to knock impudent men off the perch of their condescension or pretentiousness, then rest assured, she accomplishes this feat with an aplomb usually reserved for a virtuoso!

Juxtaposing wit with vitriol, Solnit makes a rousing case for the obliteration of the term weaker sex (the latter part of the sentence, my personal interpretation entirely), thereby restoring women to the place where they belong – on an equal pedestal with men. The book begins with a party in a forest slope above Aspen. It is 2008, and Ms. Solnit and her companion Sallie find themselves in a Ralph Lauren-styled chalet at 9,000 feet. Their host, a wealthy man, upon learning that Ms. Solnit is a writer waxes eloquent about a recent book featured by the New York Times. Having not bothered to even give the book a read, the man holds forth on the aesthetics of the literary work. Solnit’s friend after three or four unsuccessful attempts at casual interjection, finally succeeds in bringing home the point that the book in question is actually written by Solnit. “And then, as if in a nineteenth century novel, he went ashen. That I was indeed the author of the very important book it turned out he hadn’t read….so confused the neat categories into which his world was sorted that he was stunned speechless – for a moment, before he began holding forth again”.

The aforementioned incident sets out the theme of the book which is also incorrectly thought to have birthed the term, “Mansplaining.” Divided into nine essays, including a deeply poignant one on Virginia Woolf, “Men Explain Things To Me” forcefully argues for paradigm shifts in societal mindsets in so far as the concept of gender equality is concerned. The belief that the feminine is subservient to the masculine is a belief that is not only preposterous but also incorrigibly well entrenched. Ms. Solnit evidences this unfortunate fact by bringing to the reader’s attention the writings of the British judge William Blackstone way back in 1765. In his widely read commentary on English common law and, later, American law, judge Blackstone expounds:

“By marriage, the husband and wife are one person in law: that is, the very being or legal existence of the woman is suspended during the marriage, or at least is incorporated and consolidated into that of the husband.” The fact that a woman should not have a standing of her own in society is an insidious concept that has inevitably and invariably eroded even the very depths of the subliminal. This erosion has in turn, conceived an ‘entitlement’ culture where it becomes the undisputed right or the untrammeled entitlement of a man to not only possess a woman by whatever means deemed appropriate, but also, subsequent to such a possession, do unto her what the possessor’s whim and fancy dictates. A brutal fall out of this philosophy is a permeation of rape culture. This term found itself in the limelight when in December 2012, a physiotherapy student in Delhi was brutally gang raped in a moving bus before being left for dead on a road in India’s capital city Although she fought courageously, the extent of the heinous internal injuries ultimately resulted in the death of the victim. Lawyers representing the rapists, put forth arguments that went beyond the ken of nauseating and the domain of the repulsive. Shifting the blame squarely onto the unfortunate victim, they stubbornly postulated that a lady had no right walking back or taking a public transport at that time of the night.

Such crimes of entitlement are not the singular preserve of Asian or developing nations. As Ms. Solnit illustrates with reference to America, “a rape is reported only every 6.2 minutes in this country, the estimated total is perhaps five times as high. Every 6.2 minutes. (Another way to put it: the more than 11,766 corpses from domestic-violence homicides between 9/11 and 2012 exceed the number of deaths of victims on that day and all American soldiers killed in the “war on terror.”)”. The mental and physical abuse of a woman is not restricted to acts perpetrated by the illiterate, under privileged, mentally unsound or psychosomatic genre of men. The rich and famous, movers and shakers of the ilk of Dominic Strauss Kahn, Mason Mayer, Harvey Weinstein, Larry Nassar form a perverted coterie taking pleasure in objectifying women and treating them as pure fractals of lust. This, according to Ms. Solnit is the world of ‘Manistan’.

“Violence doesn’t have a race, a class, a religion or nationality, but it does have a gender”, says Solnit. It is just a class of impudent and intransigent people trumpeting, “I have the right to control you”.

The nineteenth-century geologist and survey director Clarence King and twentieth-century biologists have used the term “punctuated equilibrium” to describe a pattern of change that involves slow, quiet periods of relative stasis interrupted by turbulent intervals. The phenomenon of punctuated equilibrium resonates with the birth and furtherance of feminism and other movements upholding the cause of and case for women. “The term “sexual harassment,” for example, was coined in the 1970s, first used in the legal system in the 1980s, given legal status by the Supreme Court in 1986, and given widespread coverage in the upheaval after Anita Hill’s testimony against her former boss, Clarence Thomas, in the 1991 Senate hearings on his Supreme Court nomination.”

Similar has been the sprouting of opinions by celebrities reacting to and forming part of the #MeToo movement. On October 15, 2017, American actress Alyssa Milano posted on Twitter, “If all the women who have ever been sexually harassed or assaulted wrote ‘Me too.’ as a status, then we give people a sense of the magnitude of the problem,”.  Her act was soon emulated by a slew of high profile women celebrities of the likes of Gwyneth Paltrow, Ashley Judd, Jennifer Lawrence, and Uma Thurman.

We are still a long way away from restoring the rights and privileges that are inherent and inalienable to the life of every woman. But as Ms. Solnit points out we have at least commenced asking the right questions. In “The Mother of All Questions” Ms. Solnit proposes that we narrate the stories of women to the world. Such an act would change the way that the world treats women. In so far as this initiative is concerned, Ms. Solnit is a trendsetter herself.

4 thoughts on “Men Explain Things To Me – Rebecca Solnit”