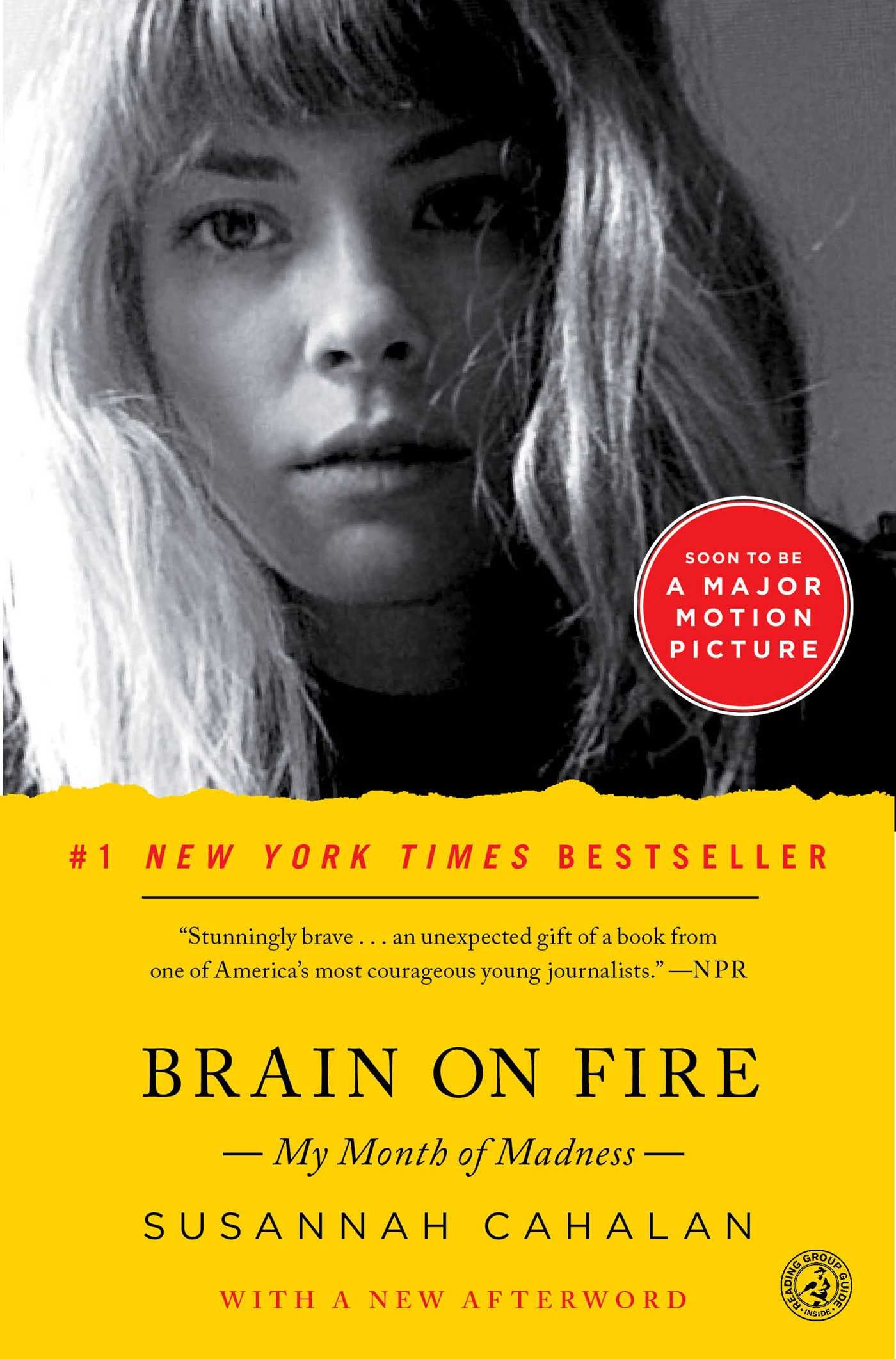 For a sprightly and vibrant New York Post reporter, purgatory began with two innocuous looking dots running down a purplish vein in her left arm. Paranoia about bed bugs, extermination agency visits and a frenzied bout of maniacal cleaning later, Susannah Cahalan realises that bug bites was not her real concern. Assailed by self-doubt at work, which results in a fumbling fiasco of an interview with John Walsh, the host of “America’s Most Wanted”, Cahalan starts exhibiting behavior veering towards the psychotic. Rifling through the emails and closet of her boyfriend she begins ascribing ulterior motives to his accumulation of memorabilia, courtesy his exes. As a precursor to the maddening seizures that would subsequently go onto rack her, Ms. Cahalan experiences a piercing migraine-like pain lancing through her brain, accompanied by a tingling in her left hand, which ultimately goes numb.

MRIs, and neurological diagnoses reveal nothing significant or impaired until Ms. Cahalan experiences full blown seizures. She undertakes a journey, lasting a month – both physically and mentally – to hell and back, during the course of which she experiences a tryst with a slew of experts, a cocktail of assorted drugs and potential lapses in prognosis that might have left the twenty-four-year-old not only in the throes of a permanent state of debilitation, but also, in all probability, killed her.

It takes the ingenuity of a Neurologist; the intrepid researching proclivities of yet another, rounded off by a dogged perseverance exhibited by an unrelentingly optimistic support system constituting family and friends to bring back Ms. Cahalan from the brink of hopelessness. Eager to absorb in its most intimate detail, the primary cause of her agonizing experience, Ms. Cahalan, – piecing together video footage recorded by the hospital, interviews given to her by the doctors who treated her, journals maintained by her estranged parents who used the written medium to communicate with one another, and conversations with her dutifully stoic boyfriend – reconstructs in marvelous detail her experiences in a gut-wrenching, heart rending, yet life-affirming book titled, “Brain On Fire: My Month of Madness.”

With this endeavor, Ms. Cahalan does yeoman service to the world of medicine. The condition that besieged her was an extremely rare auto-immune disorder going by the convoluted name of anti-NMDA-receptor autoimmune encephalitis. This is a disease occurring when antibodies produced by the body’s own immune system attack NMDA receptors in the brain. NMDA receptors are proteins that control electrical impulses in the brain. Their functions are critical for judgement, perception of reality, human interaction, the formation and retrieval of memory, and the control of unconscious activities (such as breathing, swallowing, etc.), also known as autonomic functions. The ignorance prevalent towards both the identification, evaluation and treatment of this condition is starkly illustrated by Ms. Cahalan in her book: “In the spring of 2009, I was the 217th person ever to be diagnosed with Just a year later, that figure had doubled. Now the number is in the thousands. Yet Dr. Bailey, considered one of the best neurologists in the country, had never heard of it. When we live in a time when the rate of misdiagnoses in the United States has shown no improvement since the 1930s, the lesson here is that it’s important to always get a second opinion.”

After being prescribed an eclectic concoction of anti-psychotic, anti-depressing and anti-seizure drugs, Ms. Cahalan receives a proclamation of Schizoaffective Psychoses from a battery of doctors working on her ‘case.’ It takes the intervention and intuition of a Syrian born neurologist Dr Souhel Najjar, – who also has the peculiar habit of tugging away at his mustache – to attribute a name to Ms. Cahalan’s condition, as against taking refuge in idiopathic surmises and conjectures. At the core and crux of Dr. Najjar’s diagnosis, lay hidden, an elementary and fundamental test popularly known as ‘The Clock Test.’

The clock test found a mention in the American Psychiatric Association’s Diagnostic and Statistical Manual of Mental Disorders only in 1987, a full three plus decades post its conception, and since then has been employed to diagnose problem areas of the brain in Alzheimer’s, stroke, and dementia patients. A patient is told to draw a clock and fill in all the numbers, 1 through 12 on a blank piece of paper.  Ms. Cahalan’s clock had numbers drawn on only the right side. Because of contralateral functioning of the brain, meaning that the right hemisphere is responsible for the left field of vision and vice versa, Ms. Cahalan’s clock with numbers all over the right hand side revealed that the right hemisphere—responsible for seeing the left side of that clock —was compromised.

Ms. Cahalan confesses in no uncertain terms in her book about the hand of fortune that combined with her fortitude to facilitate what ultimately turned out to be a happy ending. Dr. Josep Dalmau, a neurologist and researcher had performed cutting edge research in the domain of auto immune diseases and his efforts resulted in the identification of receptor-seeking autoimmune diseases that occur in the brain, making the anti-NMDA-receptor variety still rare but not unique. “These discoveries finally will give names to diseases vaguely referred to as “encephalitis of an unknown origin,” or “psychosis not otherwise specified,” or not given any designation at all.”

Yet another factor aiding Ms. Cahalan as she courageously waged her battle against her unseen enemy was the assured existence of a safety net, both in the form of financial security and a support system in the form of family and friends. While banking on the human element for support might be available for many sufferers, not every sufferer can boast the luxury of adequate monetary resources to help them tide over such an insidious, but completely treatable ailment. “It had cost $1 million to treat me, a number that boggles the mind. Luckily, at the time I was a full-time employee at the Post, and my insurance covered most of the exorbitant price tag” admits Ms. Cahalan.

Adding to the fact is the daunting prospect of facilitating the appropriate screening procedure for all affected. Quoting professor of psychology, Philip Harvey, Ms. Cahalan writes, “How practical would this screening be?” asks professor of psychology Philip Harvey. “Lumbar punctures for everyone? That’s an impossibility.” As Ms. Cahalan informs and educates us in a painstakingly lucid fashion, mental illness suffers from an unfortunate combination of well-entrenched beliefs, stereotypes and received wisdom. An organ as complicated as the brain cannot be treated for any inhibiting conditions by taking recourse to accepted wisdom and set precedents, even though both attributes may provide the foundational scope for further investigations.

It is imperative that more attention be bestowed to understanding the nuances underlying these types of auto immune disorders, especially considering the number of children who are being diagnosed as suffering from it. In the poignant words of Ms. Cahalan, In the late 1980s, French Canadian pediatric neurologist Dr. Guillaume Sébire noticed an unusual pattern among six children he treated from 1982 to 1990. They all had movement disorders, including involuntary tics or excessive restlessness, cognitive impairments, seizures, normal CT scans, and negative blood work results. The children were diagnosed with “encephalitis of an unknown origin” (or what was colloquially known as the Sébire syndrome), a disease that lasted on average ten months. Four of the six children made what could be called a full recovery. His hazy description of the disease persisted for another two decades. An earlier paper, written in 1981 by Robert Delong and colleagues, described “acquired reversible autistic syndrome” in children. The disease presented like autism, but two of the three children studied (a five-year-old girl and a seven-year-old boy) recovered fully, while an eleven-year-old girl continued to endure severe memory and cognitive deficits, unable to remember three words provided to her after only a few minutes had elapsed. Now, studies show that roughly 40 percent of patients diagnosed with this disease are children (and this percentage is growing), but children present the disease differently from adults: afflicted children exhibit behaviors such as temper tantrums, mutism, hypersexuality, and violence.”

Voices of reason like that of Ms. Cahalan would go a long way in ameliorating to a great extent the pernicious impact of condition such as auto immune encephalitis, thereby supplementing the tireless efforts of doctors such as Dr. Najjar and Dr. Dalmau. Ms. Cahalan also is at the forefront of a new nonprofit foundation called the Autoimmune Encephalitis Alliance, having founded the same to conduct research and spreading awareness. An effort which no doubt would result in ennobling many a life which otherwise runs the risk of being plunged in despondency with nary a hope for redemption and relief.

3 thoughts on “Brain On Fire: My Month of Madness – Susannah Cahalan”