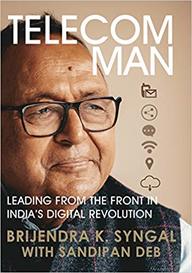 In a memoir that is part educational and part explosive, Brijendra Syngal, the former Chairman and Managing Director of Videsh Sanchar Nigam Limited (VSNL), pulls no punches in laying out bare not only the evolution of the telecom sector in India, but also the rot that permeates the inner corridors of Government and the echelon of bureaucracy. Mr. Syngal, popularly referred to as the ‘Father of Internet & Data Services in India’, has penned what can rightfully be termed a ‘no holds barred’ memoir. “Telecom Man” is a book that while making some people squeal with unbridled delight, would send some others squirming and scurrying for cover. But most importantly it reveals the trajectory that the path towards revolutionizing an industry, painstakingly traversed.

Displaced by partition when he was just seven years old, Mr. Syngal punched beyond his weight to graduate from the hallowed portals of Indian Institute of Technology (IIT) Kharagpur in the year 1961. As Mr. Syngal himself points out, only seven students, (including Mr. Syngal himself), mustered the courage to take up electronics engineering as a discipline. After a brief tenure with the electronics conglomerate Philips, Mr. Syngal joined the Department of Telecommunications, a lumbering public sector behemoth. He distinguished himself by setting up receptor stations and microwave towers in isolated regions raging from the scorching sands of the Thar desert, snake-infested jungles of Assam and the snowy treacherous heights of Kashmir. But it was at VSNL that Mr. Syngal found his métier.

Goaded by Sam Pitroda, and bolstered by a spirit of patriotism, Mr. Syngal resigned from a cushy job with INMARSAT and arrived in India to face a welter of intransigence and cacophony of babel at the corridors of India’s leading provider of telecommunication services. Soon after assuming charge, Mr. Syngal set out three priorities for VSNL: the 18,190-kilometre South East Asia-Middle East-Western Europe-2 (SEA-ME-WE2) undersea cable that would be laid from Singapore via India (if we participated) through the Middle East up to the UK, through three continents, international subscriber dialing, and the needs of the Indian software industry.

Under Mr. Syngal’ s stewardship, Under Mr. Syngal’ s leadership, VSNL ‘s gross revenues rose a mind boggling 215 percent from $515 million to $1.6 billion. The entity’s market capitalisation climbed stratospheric heights reaching 355 percent, from $0.9 billion to $4.1 billion, while profits ascended 666 percent, and gross revenue per employee 204 percent. VSNL also floated what was at that time the biggest Global Depository Receipts (GDR) issue out of India and the third largest out of Asia (Excluding Japan). However, as Mr. Syngal himself pithily illustrates, it was not all hunky dory for him. He was shunted out of VSNL in an acrimonious fashion by the NDA Government which suspected him of ‘being on the take.’ This was largely triggered by a stash of cash found in the house of Pandit Sukh Ram, who at the time of such a discovery was the Telecom Minister having succeeded Rajesh Pilot.

The two most interesting chapters in the book are the ones dealing with the initial GDR bid by VSNL which ultimately turned out to be an unmitigated disaster, and the colossal scam that was the 2G Spectrum allocation fiasco orchestrated by a brazenly corrupt and unashamed coalition Government. The GDR launched in 1994 was, according to Mr. Syngal scuppered by some vested interests, which included Pandit Sukh Ram himself. Ordering Mr. Syngal to appoint a particular banking organization to oversee the GDR issue, Sukh Ram turns incendiary upon hearing that Mr. Syngal was following well-established protocols to appoint underwriters and bankers to manage the issue. In the author’s own words, “While the selection process was going on, I got a call from Sukh Ram. ‘What is this beauty parade you are running?’ were his irate words, I remember clearly. He ordered me to award the contract to one particular American investment bank. I had already heard from the grapevine was that this investment bank may have come to some ‘arrangement’ with him, most probably a certain sum to be paid per share issued. The three top guns in the firm involved in the VSNL GDR bid were all Indians.”

But the most engrossing and controversial chapter in the book is reserved for what has gone down in the annals of Indian business and politics as one of the most infamous, if not the most infamous scams in the history of global telecom. Boasting its own moniker, the “2G Scam”, shook the very foundations of faith reposed by the citizens of India in its politician. When the dust ultimately settled, the Comptroller and Auditor General (CAG)pegged the losses arising out of irregularities in the allocation of Second Generation spectrum, at a dizzying 1.76 lakh crores. Mr. Syngal, who at the time of the scam was employed in a consultative capacity by Dua Consulting, opines that the genesis behind the scam lies in what he terms, “Coalition Dharma”, a quagmire that is the outcome of a loose set of parties possessing different ideologies but cobbled together with the sole intention of being in power. A Raja, the then telecom minister representing DMK, and who spent some time in jail before being acquitted, blatantly over ruled the directives stemming from even the Prime Minister Manmohan Singh, on judiciously allocating the finite natural resource that is spectrum instead of shoddily distributing the same on a first come first served basis.

While the book makes for a racy and riveting read, the only blotch, if it can be termed that, is a constant blowing of one’s own trumpet in an uncomfortably conspicuous manner. While there is no denying the achievements and efforts of Mr. Syngal in transforming a once lethargic Public Sector Undertaking into a cutting edge corporation to be reckoned with and even revered, more discretion could have been employed in extolling his own virtues. Certain passages in the book that are more self-paeans than factoids, take the shine out of the book to some extent. For example, consider these lines, where Mr. Syngal describes a botched attempt by Beni Verma, a Minister to shunt him out of his job: “I started using my contacts and encircled him. I had good friends in the Left. I went to Gurudas Dasgupta, MP from the Communist Party of India. In Uttar Pradesh, I knew legendary hockey player K.D. Singh Babu’s family, who were close to Mulayam Singh Yadav, to whose party Verma belonged. Then I got hold of Satish Chandran, who was principal private secretary to Deve Gowda. Pressure was created from all sides on Beni Verma, such that he could not sack B.K. Syngal. One day, the ladies from K.D. Singh’s household went to Beni Verma’s home at eight in the morning. Now, Beni Verma did not wake up before eleven. He was woken up and informed that these women had come. He emerged, clutching his dhoti, all flustered. The ladies told him, ‘Please do not meddle with Syngal saab’s case, otherwise we’ll see you in the city square of Lucknow.’ ‘No,’ stammered Verma, thoroughly confused. ‘It’s under consideration (vicharadhin hai). No decision has been taken yet.’”

Despite passages of the ilk of the ones mentioned above, “Telecom Man” makes for some stirring read. All those who are blithely under the impression that the telecommunications industry in India begins and ends with Sam Pitroda – with Pitroda himself blissfully basking in such undeserving limelight – have to necessarily read this book to understand and appreciate the endeavor of a man, known in political circles as “The Bulldozer” who in his inimitable, irascible and irreverent manner, brought about a paradigm transformation to the fortunes of telecommunications in India.